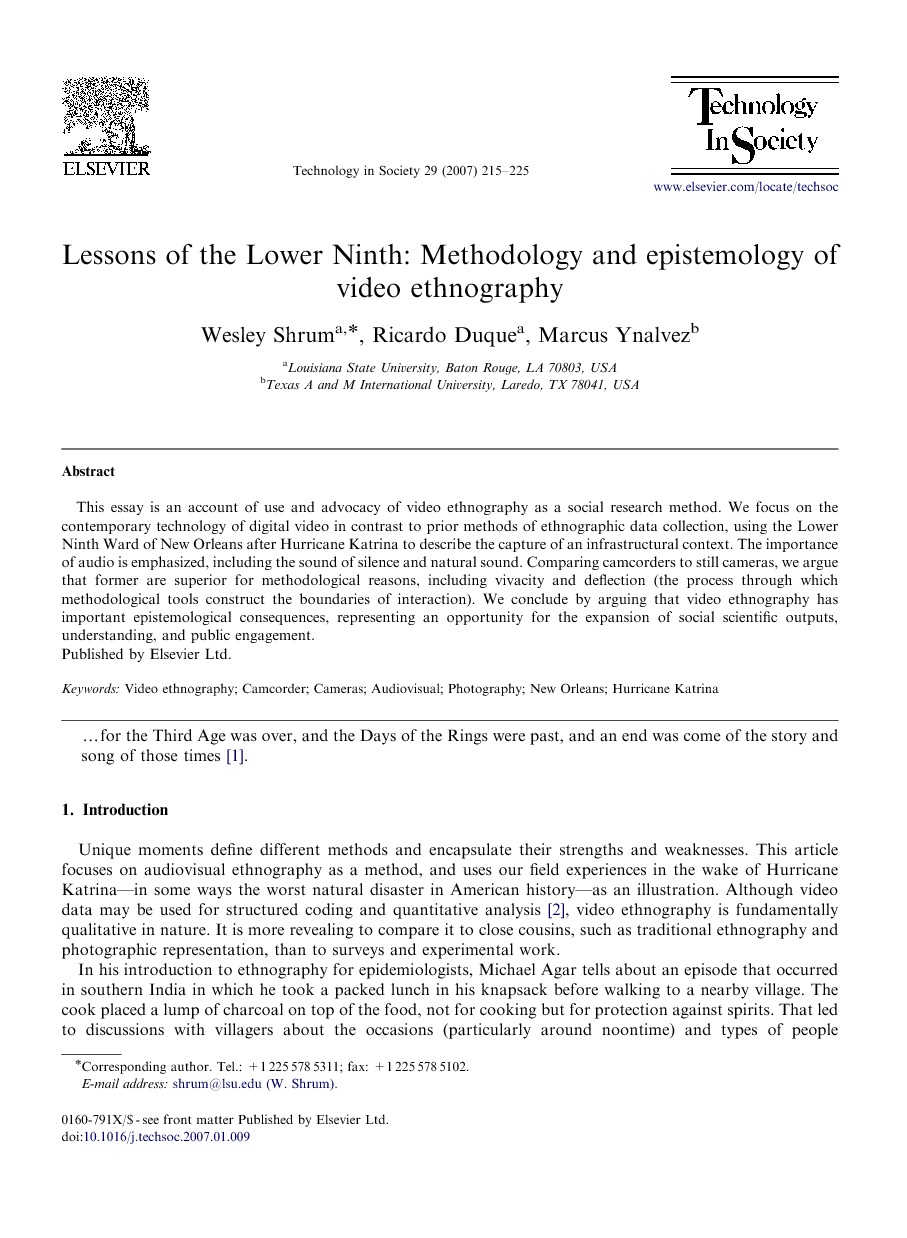 This essay is an account of use and advocacy of video ethnography as a social research method. We focus on the contemporary technology of digital video in contrast to prior methods of ethnographic data collection, using the Lower Ninth Ward of New Orleans after Hurricane Katrina to describe the capture of an infrastructural context. The importance of audio is emphasized, including the sound of silence and natural sound. Comparing camcorders to still cameras, we argue that former are superior for methodological reasons, including vivacity and deflection (the process through which methodological tools construct the boundaries of interaction). We conclude by arguing that video ethnography has important epistemological consequences, representing an opportunity for the expansion of social scientific outputs, understanding, and public engagement.

Unique moments define different methods and encapsulate their strengths and weaknesses. This article focuses on audiovisual ethnography as a method, and uses our field experiences in the wake of Hurricane Katrina—in some ways the worst natural disaster in American history—as an illustration. Although video data may be used for structured coding and quantitative analysis [2], video ethnography is fundamentally qualitative in nature. It is more revealing to compare it to close cousins, such as traditional ethnography and photographic representation, than to surveys and experimental work. In his introduction to ethnography for epidemiologists, Michael Agar tells about an episode that occurred in southern India in which he took a packed lunch in his knapsack before walking to a nearby village. The cook placed a lump of charcoal on top of the food, not for cooking but for protection against spirits. That led to discussions with villagers about the occasions (particularly around noontime) and types of people (especially young wives and labor migrants) that were particularly liable to danger and attacks, eventually resulting in a greater understanding of village culture and modernizing influences [3]. Agar's story, which he cited as a parable to illustrate participant observation, the importance of context and coherence, and the construction of understanding from problems or “rich points” in fieldwork, may be found in a section with the nostalgic title “the old days.” The “old days” of remote villages and lumps of charcoal are passing. In the new millennium, developments in connectivity, communications technology, and continually evolving media have become so important that the international community came together not once but twice for World Summits on the Information Society. In the fall of 2005, the second summit approached, as did Hurricane Katrina. For one group of sociologists at Louisiana State University, the Hurricane swept away our doubts, and the flood washed away our sociographic sins. It became a defining moment, as epistemology and practice collided, and opportunity and obligation merged. Our team had spent the last few years exclusively in international work—Nairobi, Thiruvananthapuram, Accra, Concepcion, Los Banos. Now we were truly in the eye of the storm, and the storm was at home. As one colleague said, when Katrina hit, “maybe all that experience was just preparation.” In what follows, we outline several considerations for the practice of video ethnography. For the video ethnographer, the social world consists of actors and events. The ideal of video ethnography is the capture of situations, the real occasions of dyadic, group, and crowd interactions, where the dynamics of social life occur [4]. Video ethnography is compatible with the “extended case method” described by Buroway [5], but it does not presuppose a particular theoretical approach. While our own approach is a form of radical micro-sociology, we do not see a great deal of difference in its sociotechnical application were the investigator to approach his or her subject using Marxist concepts of domination and reproduction. Macro and micro approaches to sociology are uninteresting from the standpoint of data collection, since reified theoretical constructs like “society” cannot be filmed. Close observation of the micro world is not just an option but a necessity. There is only one possibility for the video ethnographer: to film the events and actors within the frame and to embark on a tenacious search for the best possible frame for the longest possible time. In that sense, video ethnography is the purest form of sociological consciousness—because it is consciousness rather than theorizing. Theory might tell you what is important, but it will not get you your shot. In the first section of this essay, we introduce a particular social context, the Lower Ninth Ward of Orleans Parish in early October 2005, about 1 month after the worst natural disaster in American history. Using the Lower Ninth in most of our illustrations, we first describe our initial experience, capturing the infrastructural context of time and place. We then turn to the importance of audio, emphasizing both the sounds of silence and the importance of wild sound. In the next section, we argue that camcorders are superior to cameras for methodological reasons. The degree of vivacity is important here, but also the degree of deflection—the process through which methodological tools construct the boundaries of interaction. Finally, we argue that video ethnography has important epistemological consequences, representing an opportunity for the expansion of social scientific outputs, understanding, and public engagement. While we stop short of proposing that ethnographers completely cease the use of still cameras and stand-alone microphones, we do feel that they are a waste of time and money, anachronistic at best.

The centrality of digital images in research may require a shift in orientation. Video ethnography is shorthand for audiovisual ethnography. Our argument is that just as a survey researcher would wish to ask multiple questions rather than a single question, just as an experimentalist would hope to vary an experimental condition rather than perform a single run, ethnographic work is now best conducted by means of videographic tools. The ethnographer who now chooses to take a series of photographs rather than capture an event on video borders on the perverse. It is one thing to admit one is not experienced with the technology; it is another to refuse to learn a system of extreme simplicity that captures data of overwhelmingly superior quality. A single seminar during the course of graduate training would be sufficient to produce a generation of sociologists who would inspire fear—and thoughts of retirement—in the minds of documentarians. There are many visual sociologists who, if they reflect honestly on the matter, will admit the truth of this argument and would be willing to make the transition to video ethnography. We believe the time is ripe for a declaration of amnesty, so that photographers and sound recordists feel free to use their photographs as screensavers, and exchange their cameras and microphones for camcorders. With their low cost and ease of use, the current generation of camcorders makes it seem as if an entire industry has been created for our benefit. Ordinary teenagers and tourists have vastly more experience with the technology than the typical ethnographer. It is embarrassing when a professional who specializes in the close examination of social life has nothing better than a camera to record the results of fieldwork involving a staggering expenditure of time and effort, and nothing better to present to his colleagues than photographs in a powerpoint presentation. And it is frustrating when only slide projectors are available for presentations. It is time for change. In closing we state two findings based on four years of work in the developing world and 6 months of immersion in the aftermath of Hurricane Katrina: (1) the importance of editing, and (2) the unimportance of reflexivity. Until the videographer begins to work with the data and edit for presentation, the majesty and complexity of the social world cannot truly be appreciated. Handing over your material to a professional video editor is like asking someone else to write your articles. Writing is part of the crucial process of distilling, analyzing, and understanding one’s material. Such a hand off, as every scholar must agree, is not a matter of getting out of grunt work, but an unthinkable loss of opportunity. Editing is writing. The second is that reflexivity—as compared to the critical process of deflection—is a very minor part of interviewing, event videography, and videographic representation. It can occasionally be valuable. Indeed, it is hard to avoid in the early going. One cannot but marvel at one’s own genius in spectacular reverse camera work, serious and amusing turn-taking with participants, and the use of the camcorder for break-frame commentary. But your informants know that you are behind the camera. So do your colleagues and viewers. It is hard not to be nostalgic for the ‘‘old days,’’ for the walk to the village, the lump of coal, the protection from spirits. But the days of traditional ethnography have passed, with solo sound and photographs soon to follow. The video ethnographer has new destinations, new lumps in the knapsack, and new forms of deflection from spirits.We celebrate the passing of the ‘‘old days,’’ honoring our masters and forebears, for without them the age of video ethnography would be impossible. Field notes, audio recording, and photographs are no longer adequate for ethnographic data collection, and a text-based orientation to presentation is no longer adequate to the task of sociological understanding. Audiovisual research and representation needs discussion and debate, but most of all it needs practice.