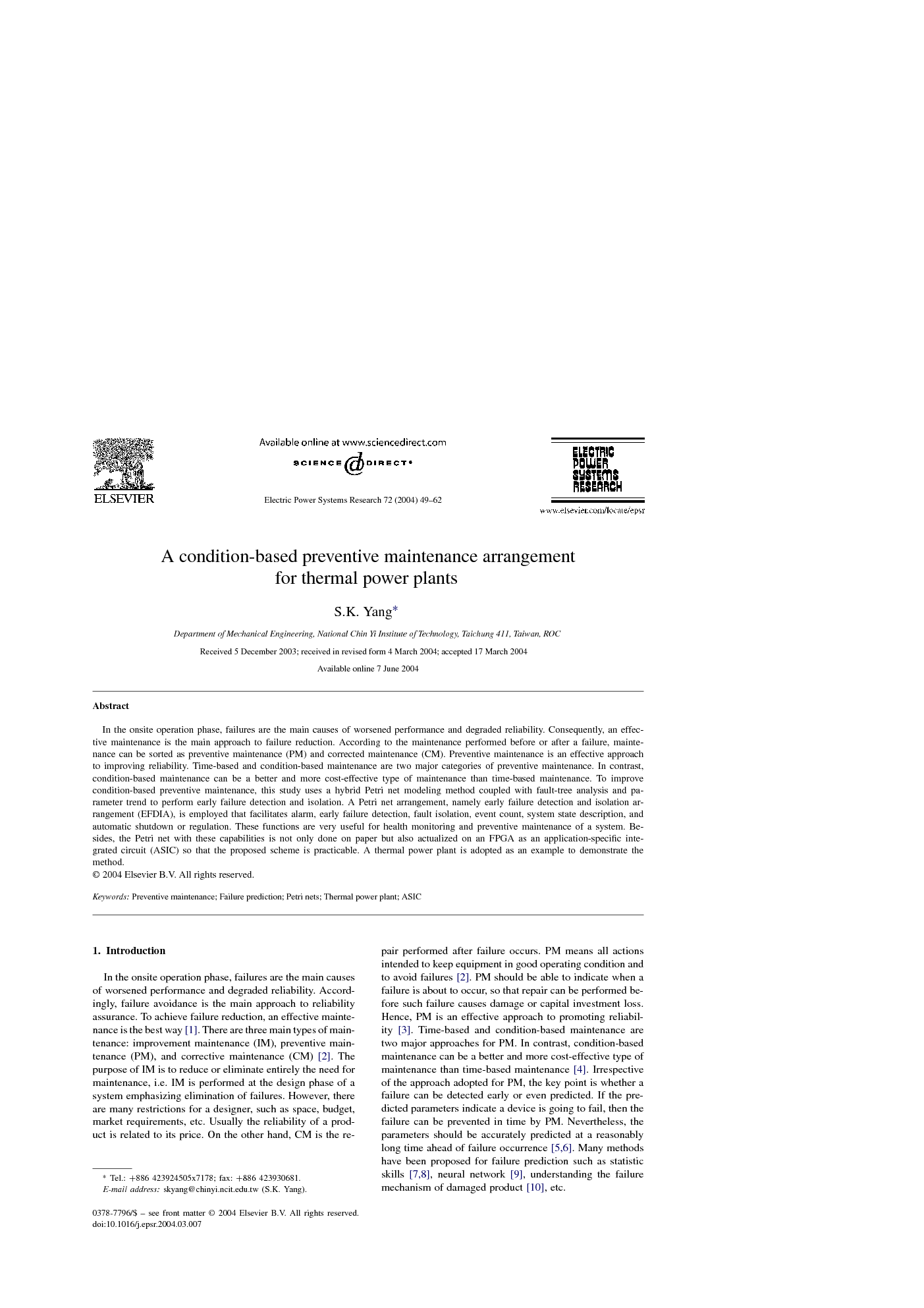 In the onsite operation phase, failures are the main causes of worsened performance and degraded reliability. Accordingly, failure avoidance is the main approach to reliability assurance. To achieve failure reduction, an effective maintenance is the best way [1]. There are three main types of maintenance: improvement maintenance (IM), preventive maintenance (PM), and corrective maintenance (CM) [2]. The purpose of IM is to reduce or eliminate entirely the need for maintenance, i.e. IM is performed at the design phase of a system emphasizing elimination of failures. However, there are many restrictions for a designer, such as space, budget, market requirements, etc. Usually the reliability of a product is related to its price. On the other hand, CM is the repair performed after failure occurs. PM means all actions intended to keep equipment in good operating condition and to avoid failures [2]. PM should be able to indicate when a failure is about to occur, so that repair can be performed before such failure causes damage or capital investment loss. Hence, PM is an effective approach to promoting reliability [3]. Time-based and condition-based maintenance are two major approaches for PM. In contrast, condition-based maintenance can be a better and more cost-effective type of maintenance than time-based maintenance [4]. Irrespective of the approach adopted for PM, the key point is whether a failure can be detected early or even predicted. If the predicted parameters indicate a device is going to fail, then the failure can be prevented in time by PM. Nevertheless, the parameters should be accurately predicted at a reasonably long time ahead of failure occurrence [5] and [6]. Many methods have been proposed for failure prediction such as statistic skills [7] and [8], neural network [9], understanding the failure mechanism of damaged product [10], etc. Time-based maintenance is commonly adopted by the power plants in Taiwan recently. A scheduled maintenance is enacted based on a statistical average that is suggested by the equipment vendor or decided by the field-engineers. Therefore, time-based maintenance still retains the unavoidable risk that the system may fail before criteria are exceeded, i.e. a failure may occur unexpectedly. On the other hand, the actual duty-cycles for a certain part or module may be longer than those averages, so if they are replaced during scheduled maintenance, that is a waste of the investment. The condition-based scheme avoids those drawbacks. This study aims to promote the maintenance strategy for a thermal power plant from timed-based to condition-based. Probabilistic risk assessment (PRA) is one of the effective methods for hazard reduction and maintenance strategy planning [11] and [12]. PRA is widely used in different areas concerning system safety, such as power plants [13], [14] and [15], space shuttle [16], etc. Many extensions of the classic fault tree, for example: a probabilistic fault tree [17] and a dynamic fault tree [18], are employed as tools [19] to perform PRA. Expert system for PRA is developed [20] as well. In this study, a hybrid Petri net modeling method coupled with fault-tree analysis and parameter trend are used to perform early failure detection and isolation. First of all, a Petri net dealing with system failure, namely PNSF, has to be established, which can either be transformed from a system fault-tree or be constructed directly [4]. Each event in the PNSF is continuously monitored by an adequate sensor. Actual values of the event are acquired by the monitor sensors. Each event has a prescribed warning value, and the sensor-acquired value is compared with the prescribed warning value to judge whether the monitored event to be failed or not. Once the sensor-acquired value reaches the warning value, the failure is predicted. Accordingly, the current state is a warning state and the PM should be executed now. Nowadays, ICs are becoming not only smaller and more powerful but also faster and cheaper. As a result, application-specific integrated circuits (ASICs) are widely used. In practice, Petri nets can be implemented as ASICs, so as to perform specific functions without user intervention. The Petri net used to perform early failure detection and isolation in this study is converted to logic circuit and actualized on an ASIC via an Field-Programmable Gate Array (FPGA).

Knowing when and where a system needs maintenance and economizing capital investment are two of the major problems of maintenance. The aforementioned approach improves the maintenance problem in the following aspects: 1. Before a failure of a system occurs, the approach is able to indicate where and when the failure is going to be. 2. It makes the health condition and the historical record of maintenance for a system clear at a glance. 3. It avoids the drawbacks of a timed-based maintenance, i.e. unavoidable risks of failure occurrence and investment waste. This paper has presented an early failure detection and isolation scheme for PM via the thermal power plant example, by using a hybrid Petri net modeling method endowed with fault-tree analysis and parameter trend. The PNSF has to be constructed beforehand. The next task is to obtain control charts for all fault places in the PNSF in order to prescribe thresholds and allowable margins. With these prerequisites, the present method can be applied to any system. The introduced Petri net approach not only can achieve early failure detection and isolation for fault diagnosis but also facilitates event count, system state description, and automatic shutdown or regulation. These capabilities are very useful for health monitoring and preventive maintenance of a system. Besides, the Petri net with these capabilities, i.e. EFDIA, is not only done on paper but also actualized on an ASIC so that the proposed scheme is practicable. The presented method promotes the maintenance strategy for a thermal power plant from timed-based to condition-based.