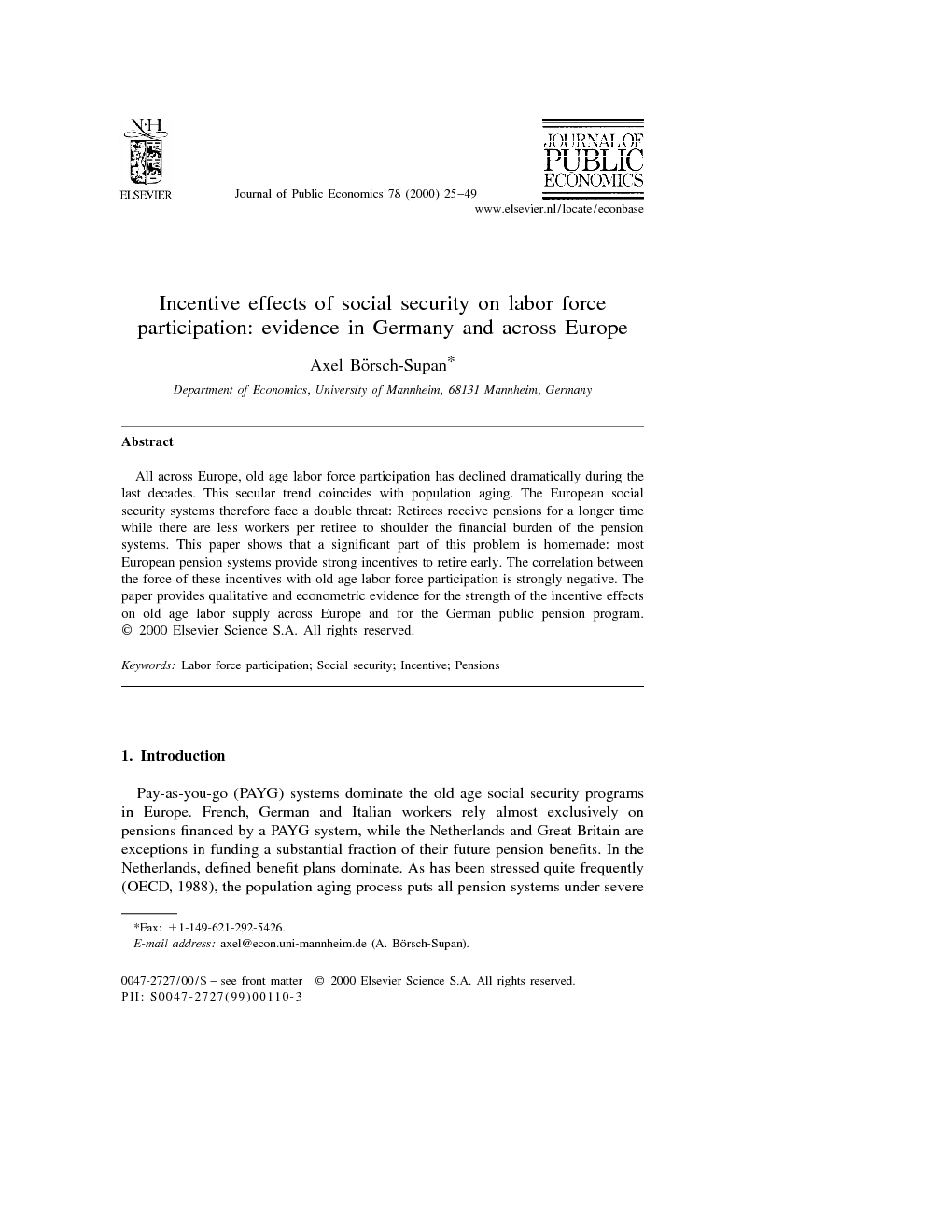 All across Europe, old age labor force participation has declined dramatically during the last decades. This secular trend coincides with population aging. The European social security systems therefore face a double threat: Retirees receive pensions for a longer time while there are less workers per retiree to shoulder the financial burden of the pension systems. This paper shows that a significant part of this problem is homemade: most European pension systems provide strong incentives to retire early. The correlation between the force of these incentives with old age labor force participation is strongly negative. The paper provides qualitative and econometric evidence for the strength of the incentive effects on old age labor supply across Europe and for the German public pension program.

Pay-as-you-go (PAYG) systems dominate the old age social security programs in Europe. French, German and Italian workers rely almost exclusively on pensions financed by a PAYG system, while the Netherlands and Great Britain are exceptions in funding a substantial fraction of their future pension benefits. In the Netherlands, defined benefit plans dominate. As has been stressed quite frequently (OECD, 1988), the population aging process puts all pension systems under severe strain, but particularly defined benefit plans and most dramatically the pay-as-you-go pension systems. At the same time, European old age labor force participation rates have declined substantially and are relatively low compared to the United States and Japan The decline in old age labor force participation is very pronounced in Belgium, Italy, France, the Netherlands, and Germany. All of the European countries in Fig. 1 have old age labor force participation rates below Japan, and only Sweden is above the U.S. The decline in old age labor force participation amplifies the problems of financing social security in times of population aging because it implies more recipients and less contributors. A recent volume edited by Gruber and Wise (1998) argues that the declining old age labor force is strongly correlated with the incentives created by generous early retirement provisions. Unlike defined contribution plans in funded pension systems, pay-as-you-go systems are intrinsically difficult to design in a fashion that is actuarially fair. Moreover, the early retirement provisions in most European pension systems increase this actuarial unfairness for those who retire normally or late. Pension wealth is actually decreasing when retirement is postponed past the early retirement age in all countries depicted in Fig. 1. In their summary article, Gruber and Wise (1998) estimate the international correlation between aggregate measures of old age labor force participation and early retirement incentives. Fig. 2 shows our variant of their results, linking the proportion of men out of labor force at age 59 with a measure of the strength of labor force disincentives after age 59, defined as the accumulated loss of pension wealth when retirement is postponed past age 59.The paper uses two strands of evidence to show this claim. One the one hand, it uses international variation in pension provisions across Europe to link incentives and labor force exit decisions. Countries included are Belgium, France, Germany, Italy, Spain, Sweden and the Netherlands. This part of the analysis uses no formal econometrics. Rather, it points out ‘kinks’ in the pension wealth accrual function. This key statistic of the first part of the paper relates the present discounted value of retirement benefits to retirement age. The paper shows that the institutional factors embedded in this function strongly correlate with ‘spikes’ in the departure rate from employment. One the other hand, the paper takes Germany as an example. Germany has one of the most generous retirement systems in the world. At the very same time, Germany also faces one of the most incisive population aging processes. The proportion of persons aged 60 and older will increase from 21% in 1995 to 36% in the year 2035, when the aging process will peak in Germany. With Switzerland and Austria, this will be the highest proportion in the world in the year 2035. A formal econometric analysis exploits changes in pension regulations over time as well as cross-sectional variation in the applicable social security rules to estimate how social security regulations have influenced old age labor force participation in Germany. The key statistic in this second part of the paper is the option value to postpone retirement. Not surprisingly, the option value function is closely related to the pension wealth accrual function used in the first part of the paper. The paper stresses two implications for pension policy in the face of rapid population aging. First, remaining within the framework of the pay-as-you-go pension system, early retirement can be considerably reduced by abolishing early retirement incentives. Estimates for Germany indicate that an actuarial fair retirement system will reduce retirement before age 60 by more than a third. Second, the results imply that welfare comparisons between pay-as-you-go and fully funded systems that do not model the retirement decision ignore important welfare reducing redistributions between early and normal (and late) retirees. The strategy of this paper is to employ several different ways to identify incentive effects, using historical, international and econometric evidence, in the hope that the weight of the cumulative evidence is stronger than the sum of each single step. The reader will therefore be shuttled among different perspectives. Section 2 begins with a brief description of the German pension system and the early retirement incentives it creates. Section 3 provides informal evidence for the link between early retirement incentives and old age labor force participation in Germany, and Section 4 extends this analysis to a set of European countries. Section 5 supplies the econometric methodology that is employed in Section 6 for a formal analysis of early retirement incentives in Germany, 1984–1996. Section 7 concludes.

The strategy of this paper was to use several different strands of evidence to argue that pension incentives are an important cause for the decline in, and the relatively low level of, old age labor participation in Europe. It was motivated by the hope that the weight of the cumulative evidence is stronger than the sum of each single step. We exploited international and German historical and cross-sectional variation in social security regulations. Pension incentives, visible as kinks in the accrual function, correspond closely to spikes in the distribution of retirement ages in the countries we inspected. We looked at the German case in more detail. The German case is interesting because population aging in Germany is particularly strong and while Germany nevertheless has one of the most generous and rigid PAYG systems. Moreover, because of the ubiquitousness of the German public pension system, microeconometric analysis is much easier than, say, in the U.S. or the UK with their very heterogeneous firm pensions. We did three exercises. We looked at the kinks and spikes in more detail; we looked at the historical response to the 1972 pension reform with its sudden introduction of various early retirement options; and we estimated a formal econometric retirement model based on option value analysis. All three exercises yielded the same result, corresponding to the results of the international comparisons: Workers have responded consistently and strongly to the economic incentives to retire earlier. It is interesting to note that they have done so before unemployment became widespread in the beginning of the 1980s. Policy-induced early retirement accounts for about a third of early retirement, thus a substantial fraction of total pension expenditures. The responsiveness of the choice of retirement age to the incentives offered by pension systems has strong policy impacts. The public pension systems do not use retirement-age-dependent adjustments of pension benefits as policy instruments for balancing the budget of the pension system, they even yield incentives to retire early, most frequently at the earliest legal retirement age. While this has alleviated the unemployment problem in the short run, is was an expensive way to do so, and it will hurt in the long run. Rather than awarding later retirement to moderate the labor supply disincentives created by quickly rising social security taxes, social security regulations across the world have encouraged early retirement, thus aggravating the imbalance between the number of workers and pensioners in times of population aging. The responsiveness to actuarially unfair pension regulations also shows that there is widespread redistribution between from late to early retirees. This increases the deadweight burden generated by contributions to PAYG pension systems, a crucial parameter in computations that try to design welfare-improving transitions from PAYG to fully funded pension systems (e.g., Feldstein and Samwick, 1996 and Kotlikoff, 1996). The estimates of the option value model can be used to quantify these order of magnitude for such deadweight burden calculations.