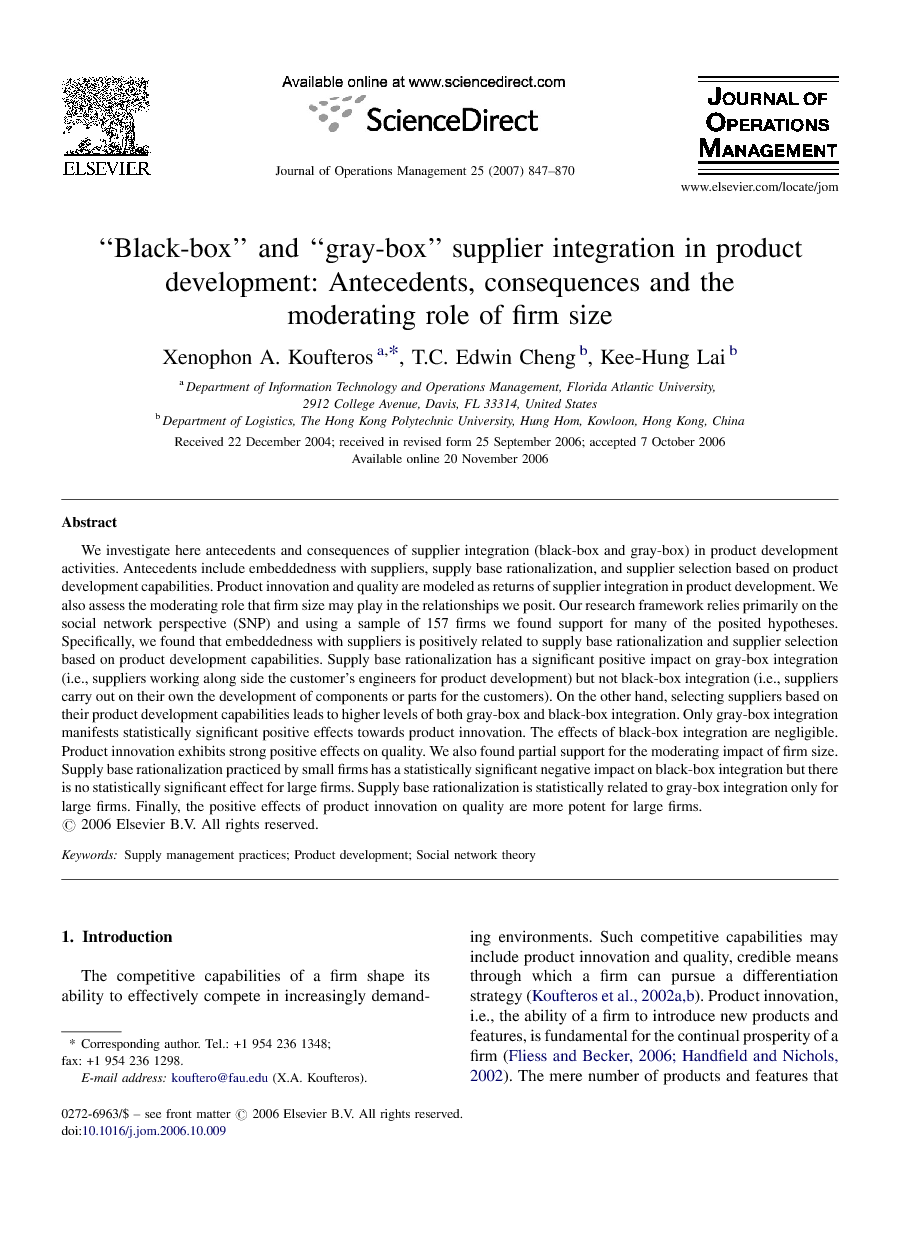 The competitive capabilities of a firm shape its ability to effectively compete in increasingly demanding environments. Such competitive capabilities may include product innovation and quality, credible means through which a firm can pursue a differentiation strategy (Koufteros et al., 2002a and Koufteros et al., 2002b). Product innovation, i.e., the ability of a firm to introduce new products and features, is fundamental for the continual prosperity of a firm (Fliess and Becker, 2006 and Handfield and Nichols, 2002). The mere number of products and features that enter the market however would be inconsequential if their introduction in the market fails to fulfill customer expectations for quality (Koufteros et al., 2002a and Koufteros et al., 2002b). With competitive capabilities being vitally important, firms constantly seek to engage in practices that would enhance their competitive capacity to innovate. In order to enhance their product innovation capabilities and subsequently quality, many firms rely on their suppliers for product development contributions (Petersen et al., 2005 and Tan, 2001). Due to bounded rationality considerations (Simon, 1957), manufacturers focus on the enhancement of their own core competencies and depend on complimentary competencies that can be garnered from the involvement of their suppliers in product development (Handfield and Nichols, 2002). Two basic forms of supplier involvement in product development are the gray-box and black-box approaches (Petersen et al., 2005). With a gray-box approach the supplier and the customer work along side each other. The supplier provides expertise, suggestions and other input towards the product development effort but typically will not assume sole responsibility for developing parts, let alone modules for the final product. On the other hand, a black-box approach implies that each company would concentrate on certain tasks and components. The supplier can be “trusted” to develop parts, components, or subassemblies. Trusting a supplier is often problematic not only from an ethical or legal perspective, but also from a competency viewpoint (Koufteros et al., 2005). Integrating suppliers in product development involves significant risk, time, and financial resources from both parties and thus cannot be taken lightly. Firms would have an interest in collaborating with suppliers that do possess product development capabilities in order to capitalize on such supplier competencies and avoid the inherent risks associated with partnering with incapable suppliers. The suppliers in turn would need some assurances that there will be a continuation of the relationship and enough business to make it worthwhile. Such assurances can be presented through a customer's supply base rationalization practice (Handfield and Nichols, 2002). Supply base rationalization is characterized by a significant reduction in the number of suppliers in the supplier base. This can be an incentive for suppliers to engage in product development activities as they could potentially enjoy higher sales volume amongst other opportunities (Shin et al., 2000). Supply base rationalization also enables more effective management of supplier relationships (Tully, 1995). The continuation, and perhaps an expansion, of the relationship between partners are perhaps predicated on the cooperative relationship orientation between the customer and the supplier (Tan, 2001). Fliess and Becker (2006) provide a chronology of the literature on co-development processes. This dates back to Clark (1989) and Clark and Fujimoto (1991), where they compared different product development practices in Japan, Europe, and the U.S. Since then, at least 33 other studies have been published in reputable scholarly journals. While there is a significant body of literature that discusses co-development processes, this manuscript contributes to the literature in unique ways. First, it provides an extensive theoretical treatise supporting the posited relationships between the constructs considered. This is based primarily on the social network perspective (SNP) (e.g., Gulati, 1995, Gulati, 1998, Gulati and Gargiulo, 1999, Khanna et al., 1994 and Khanna et al., 1998). The key premise of SNP is that a firm embeds itself in a network to create access to knowledge and other capital that can be mobilized to increase returns for the firm and other network actors (Inkpen and Tsang, 2005). Second, supplier mobilization through integration in product development efforts has been operationalized here through two different constructs, namely gray-box and black-box integration. Prior large-scale empirical research has not made an explicit distinction between these two constructs. A rare exception is Petersen et al. (2005), but they conceptualized gray-box and black-box integration as a dichotomy and as an environmental variable. Subsequently, they modeled the level of supplier integration as a moderator variable. We model gray-box and black-box integration as decision variables (i.e., practices) with defined returns such as product innovation. Third, we develop a nomological network of constructs, i.e., we include antecedents and consequences of supplier integration in product development. Fourth, we examine whether firm size may moderate the relationships between the constructs under study. The examination of firm size as a potential moderator merits investigation. Many of the widely advocated supply chain management practices are based on their successful adoption by relatively large firms. The applicability and feasibility of such practices for small firms are yet to be determined. Finally, we employ a structural equation modeling approach to test the moderating effects. We test for measurement and structural model invariance through multi-group analysis. Multi-group analysis conducted through sequential measurement and structural model invariance tests can identify whether any significant moderated effects can be truly attributed to structural coefficient differences and they are not solely measurement model differences (Koufteros and Marcoulides, 2006).

The importance of supply practices is a topic that has received considerable attention in both the popular literature and academic outlets. The reported benefits include improvements in operational performance, as well as firm performance. Due to the importance of these practices, there has been a surge in academic empirical research studies in the last few years. A basic research question here is whether embedded ties and integration with suppliers for product development are indeed fruitful. This study examined whether some of the most salient practices of supply management have an impact on competitive capabilities. Using a sample of 157 firms, the data analyses showed that some of these practices are indeed impacting competitive capabilities. Embeddedness with suppliers was found to influence both supply base rationalization practices and the selection of suppliers based on product development capabilities. The effects on supply base rationalization and selection of suppliers based on their capabilities were a bit weaker however for larger firms. Supply base rationalization and selecting suppliers based on their capabilities could facilitate access to the core competencies residing within the supply chain. While we did not hypothesize and formally test for indirect effects, embeddedness with suppliers seems to have far reaching effects on other supply chain management practices and ultimately performance as it is shown in Table 4. Developing such embedded ties appears to be an indispensable tool for employing a strategy of success. Supply base rationalization does have an effect on supplier gray-box integration and this indicates the importance of supply base rationalization in providing perhaps the motivation for suppliers to engage in product development activities alongside their customers. As Choi and Krause (2006) point out, a natural outcome of supply base rationalization is an elevated dependence on the retained suppliers. The effect on supplier gray-box integration was statistically significant and more potent for large firms. Supply base rationalization practices did not have an overall statistically significant impact on supplier black-box integration. However, the effect for small firms was statistically significant, but negative. This raises questions as to the propriety of integrating suppliers through this format for small firms. Although supply base rationalization has an indirect effect on product innovation and external quality, the effects were not statistically significant as it is apparent in Table 4. This coincides with Chen and Paulraj's (2004) findings that supply base reduction is a weak predictor of buyer operational performance (r = 0.19). Supplier selection based on product development capabilities appears to be a strong predictor of black-box and gray-box supplier integration (mobilization) in product development. The effect is strong and remains sound irrespective of firm size as Table 5 illustrates. The selection of suppliers that have strong product development capabilities can result in higher product innovation and external quality levels (Table 4). Such an effect, however, is indirect and it was not formally posited and examined. The results presented by Primo and Amudson (2002) suggest that supplier involvement does have a strong relationship with performance and in particular many aspects of quality. Primo and Amudson (2002) also indicate that supplier involvement may not impact project speed. Our model considers however two kinds of involvement: black-box and gray-box integration (mobilization) and sheds more light on the nature of the relationships with performance variables. The direct (and indirect) effects of supplier black-box integration on product innovation and subsequently quality were statistically non-significant. On the other hand, the direct effect of supplier gray-box integration on product innovation was positive and statistically significant. There is also evidence that the indirect effect on external quality was also positive and significant. From a cursory reading of the results, it is clear that supplier gray-box integration is more conducive to product innovation than supplier black-box integration. But yet, this may be an artifact of the short appearance of black-box integration here in the U.S. Both Table 3 and Table 6 show that gray-box integration is more prevalent than black-box integration. It is also quite possible that as the customer relies more and more on its suppliers for product development and innovation, its own product innovation capabilities may deteriorate. The customer may become complacent and too dependent on the core capabilities of its partners and thus its own product innovation capabilities may be impeded. Although Petersen et al. (2005) modeled the gray-box and black-box dichotomy via a moderator variable, their results are also quite revealing and point to the usefulness of distinguishing between supplier integration approaches. For example, supplier input on technical objectives has no important relationship with team effectiveness in a gray-box environment but such input was found to be vital in a black-box environment. Similarly, supplier involvement in setting business metrics and targets was found to have a positive impact on decision making effectiveness in a gray-box environment, while the effect was negative in a black-box environment. Brown and Eisenhardt (1995) suggest that empirical evidence that relates supplier involvement and performance is not conclusive and in many respects imprecise. It is our conclusion too that more research is necessary before we can ascertain the nature of the relationships amongst the variables under study. More research that investigates the moderating role of firm size and other contextual variables is also desirable. The results here indicate that firm size may moderate some of the relationships. Caution should be provided before pronouncements are made in favor of certain practices. Table 6 presents evidence that suggests that small firms do not use supply chain management practices to the same extent as the large firms do. They use them at lower levels. Such information suggests that small firms are likely to face different pressures than their large counterparts. Large firms are more likely to assume the role of a “principal” in the supply chain, where they can “call the shots” and acquire acquiescence that otherwise will not be possible for small firms. Consistent with Koufteros et al., 2002a, Koufteros et al., 2002b and Koufteros et al., 2005, product innovation does have a strong effect on external quality and that effect appears to be stronger for large firms. Nevertheless, the effect is also statistically significant for small firms.