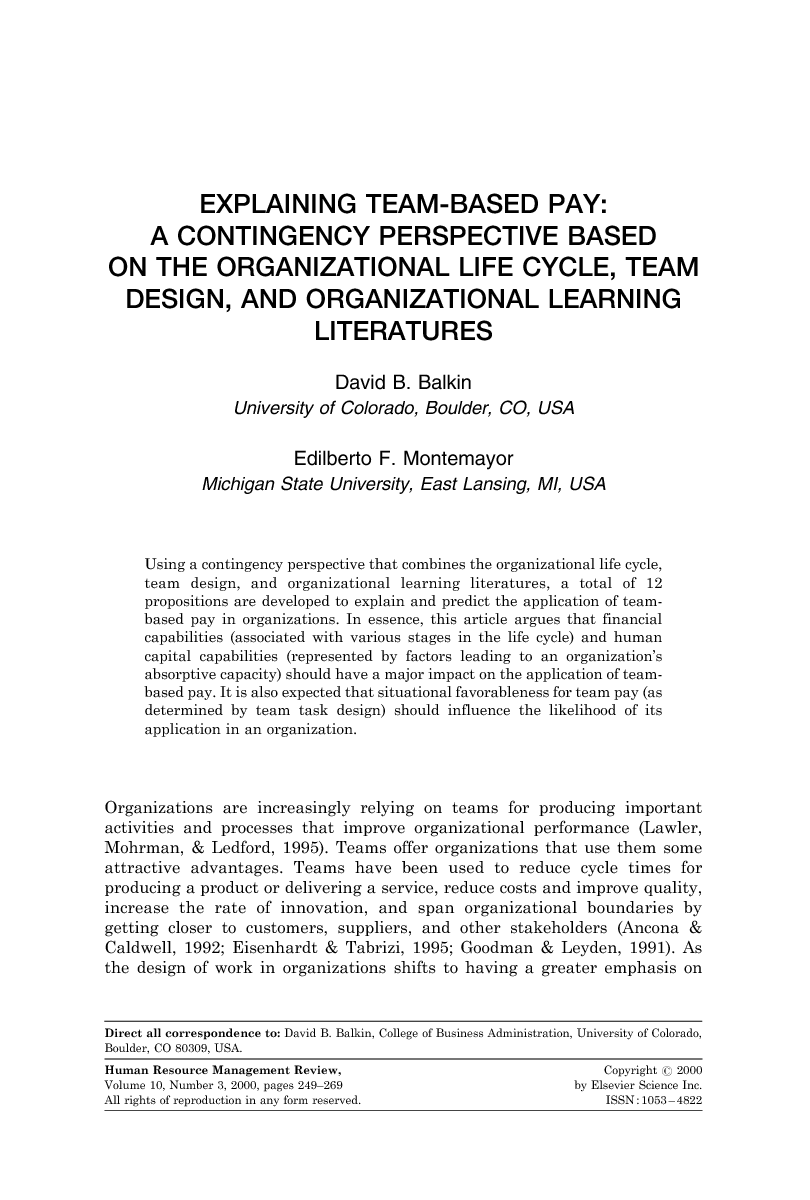 Using a contingency perspective that combines the organizational life cycle, team design, and organizational learning literatures, a total of 12 propositions are developed to explain and predict the application of team-based pay in organizations. In essence, this article argues that financial capabilities (associated with various stages in the life cycle) and human capital capabilities (represented by factors leading to an organization's absorptive capacity) should have a major impact on the application of team-based pay. It is also expected that situational favorableness for team pay (as determined by team task design) should influence the likelihood of its application in an organization.

Organizations are increasingly relying on teams for producing important activities and processes that improve organizational performance (Lawler, Mohrman, & Ledford, 1995). Teams offer organizations that use them some attractive advantages. Teams have been used to reduce cycle times for producing a product or delivering a service, reduce costs and improve quality, increase the rate of innovation, and span organizational boundaries by getting closer to customers, suppliers, and other stakeholders Ancona & Caldwell, 1992, Eisenhardt & Tabrizi, 1995 and Goodman & Leyden, 1991. As the design of work in organizations shifts to having a greater emphasis on collective performance based on the output of the team, organization pay systems may need to be re-aligned. The traditional organization pay system in the U.S. that recognizes only individual employee contributions with pay based on merit or seniority is likely to discourage important team behaviors such as information sharing and cooperation. Despite the emphasis on individual-based pay systems in the U.S., which reflects a highly individualistic cultural orientation (Gomez-Mejia & Welbourne, 1991), there is a growing interest in industry to recognize team achievements with pay (Gross, 1995). There is a need for both compensation scholars and practitioners to understand the types of situations most favorable for the use of team-based pay (Gomez-Mejia & Balkin, 1992). At present, most of the available published work done on team-based pay comes from the practitioner literature consisting of case histories of team-based pay (Zingheim & Schuster, 1997) or approaches used by consultants such as The Hay Group to implement team-based pay in different organizations (Gross, 1995). These studies take a descriptive approach to team pay but do not reveal the nature of the deeper underlying relationships between team pay and other organization variables. The purpose of this article is to develop some testable theoretical propositions that are likely to contribute to advances to our understanding of the conditions that are supportive for the application of team-based pay in firms. We will begin by defining what we mean by a team. A team is a small number of people with complementary skills who are committed to a common purpose, set of performance goals, and approach for which they hold themselves mutually accountable (Katzenbach & Smith, 1993). Team members can be expected to interact with each other on a regular basis. Teams differ from groups because group members are more likely to be working towards individual performance goals, whereas members of a team are mutually accountable to each other and work towards a collective goal. Another difference between groups and teams is that groups have less autonomy and are more closely supervised than teams (Banker, Field, Schroeder, & Sinha, 1996). The size of a team can vary from as small as two employees to an upper bound of about 25 people. Team-based pay rewards employees for the outcome produced by the team. Examples of team-based pay could include a commission that is shared between several members of a sales force that collaborated to sell a commercial real estate property, a cash bonus for a product development team of software engineers that delivered a bug-free program on time to the market, or a work team that achieves a higher level of competency for all team members and is rewarded with a higher level of pay (Gomez-Mejia, Balkin, & Cardy, 1998). For example, Aetna, a financial services company, uses teams that focus on providing high quality service to customer. A team that provides exceptional customer service can be singled out to receive a small monetary cash reward that provides immediate recognition of team performance (Balkin, Dolan, & Forgues, 1997). Using a contingency paradigm, we will apply theoretical perspectives from the organizational life cycle, team task design, and organizational learning literatures to improve our understanding of the conditions supportive of the application of team-based pay