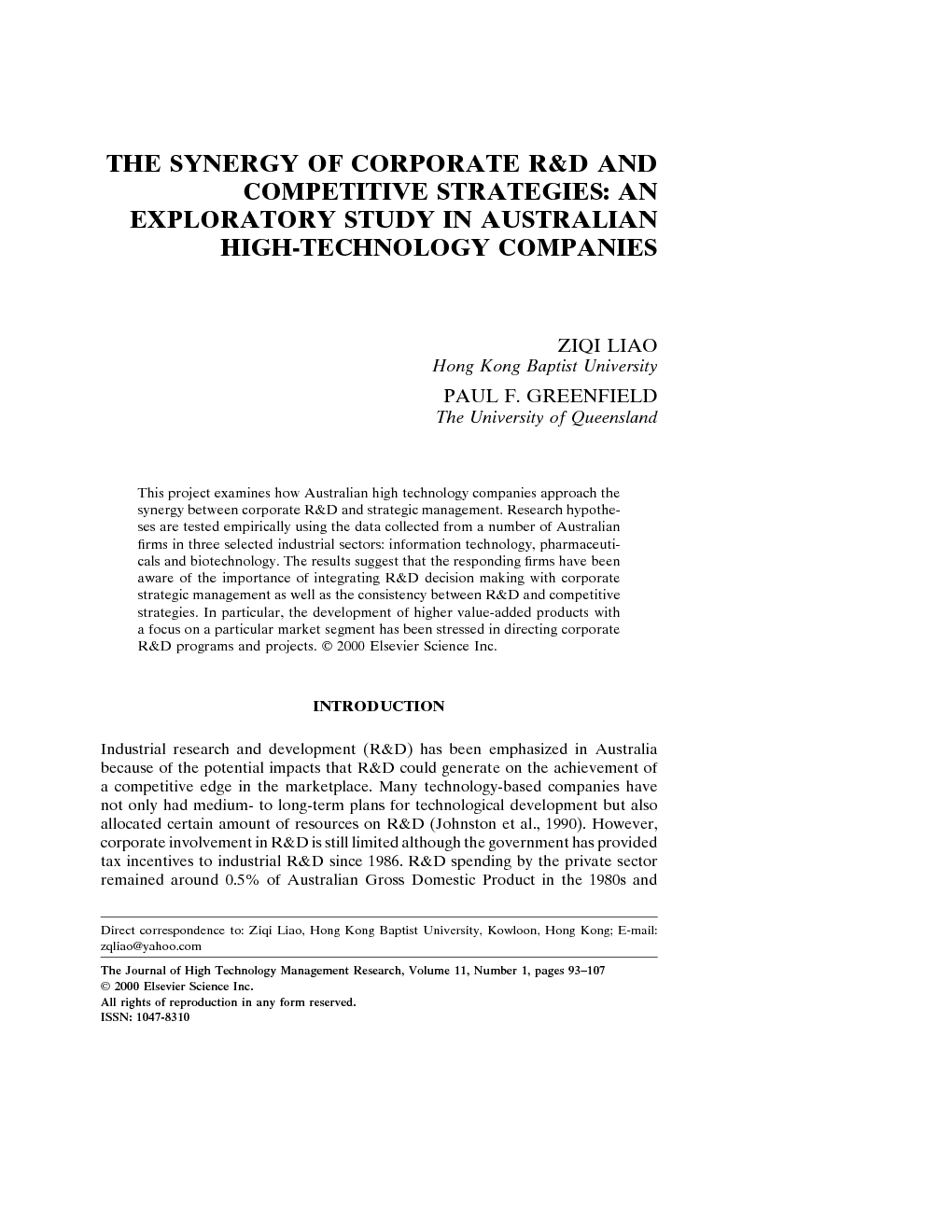 This project examines how Australian high technology companies approach the synergy between corporate R&D and strategic management. Research hypotheses are tested empirically using the data collected from a number of Australian firms in three selected industrial sectors: information technology, pharmaceuticals and biotechnology. The results suggest that the responding firms have been aware of the importance of integrating R&D decision making with corporate strategic management as well as the consistency between R&D and competitive strategies. In particular, the development of higher value-added products with a focus on a particular market segment has been stressed in directing corporate R&D programs and projects.

Industrial research and development (R&D) has been emphasized in Australia because of the potential impacts that R&D could generate on the achievement of a competitive edge in the marketplace. Many technology-based companies have not only had medium- to long-term plans for technological development but also allocated certain amount of resources on R&D (Johnston et al., 1990). However, corporate involvement in R&D is still limited although the government has provided tax incentives to industrial R&D since 1986. R&D spending by the private sector remained around 0.5% of Australian Gross Domestic Product in the 1980s and early 1990s (ABS, 1991), and gradually increased to 0.87% in the mid 1990s (ABS, 1997). Despite evidence that there is an increasing trend on private R&D spending, statistics show that Australia was still ranked below average among countries associated with the Organization for Economic Cooperation and Development (OECD) in the mid 1990s (ABS, 1997). Australian private industry has relatively less involvement in R&D compared with the private sector of other OECD countries such as Japan, Switzerland, Germany, and the United States. Several critical factors that influence the research capability of companies include the small size and limited technological sophistication of Australian manufacturing base, the relative absence of large technology-oriented companies, the small domestic market and limited availability of capital (TFCR, 1991). A study by the Department of Industry, Technology and Commerce (DITC, 1991) indicates that manufacturing firms exhibited a low rate of technology adoption. Australian industry as a whole was also not able to capitalize on the results of a significant proportion of technologically successful R&D (PCEK & BCG, 1991). As a matter of fact, Australia has achieved a great success in the development of science and technology because the number of patent applications lodged in foreign countries by Australian has dramatically increased since 1980. Instead of the limitation of technical expertise, inexperience in strategic management and commercialization of R&D often prevents companies from achieving a return on investments. Many R&D projects that did not achieve success did not fail for technical reasons (PCEK & BCG, 1991). Actually, major obstacles include inadequate market access, inaccurate judgment of markets, customers and competitors and insufficient financial resources. The technology-intensive industries such as information technology, electronics, pharmaceuticals, and biotechnology are relatively small in comparison to the resource-based industries in Australia. According to the Industrial Research and Development Board (IR&DB, 1991), Australian firms carried out less R&D per unit of value added than their international counterparts in a similar industry. In addition, the gap between Australia's private expenditure and that of other nations could be partly accounted for by the fact that Australia has a small proportion of technology-intensive industries such as electronics and pharmaceuticals. Most high-tech companies in these industries are small- and medium-sized enterprises in which limited funds are available for R&D. Furthermore, the market has little influences on corporate R&D because many research projects are financially supported by government and conducted in public research institutions and universities (TFCR, 1991). The need to strengthen corporate R&D in the private sector was stressed over the last decade (Johnston et al., 1990; PCEK & BCG, 1991; TFCR 1991 and Liao & Greenfield 1998). Prior studies provided considerable insight on industrial R&D and corporate technology management in Australia. However, a review of existing literature revealed that there was limited empirical research on the influence of competitive strategies on R&D decision making and the integration between strategic management and corporate R&D. Therefore, a survey was conducted to fill the research gap by exploring the impact of competitive strategies on the decision making of corporate R&D programs and projects in the Australian context. It placed an emphasis on the synergy of corporate R&D and strategic management in technology-based companies. The remaining part of this paper begins with a description of research background and related hypotheses, followed by the research methodologies. Statistical results of the survey are then presented and the hypotheses are examined. Furthermore, the implications of the study to practical R&D decision making in corporate environments are discussed. Finally, the limitations of the study and the avenues for future research are highlighted.