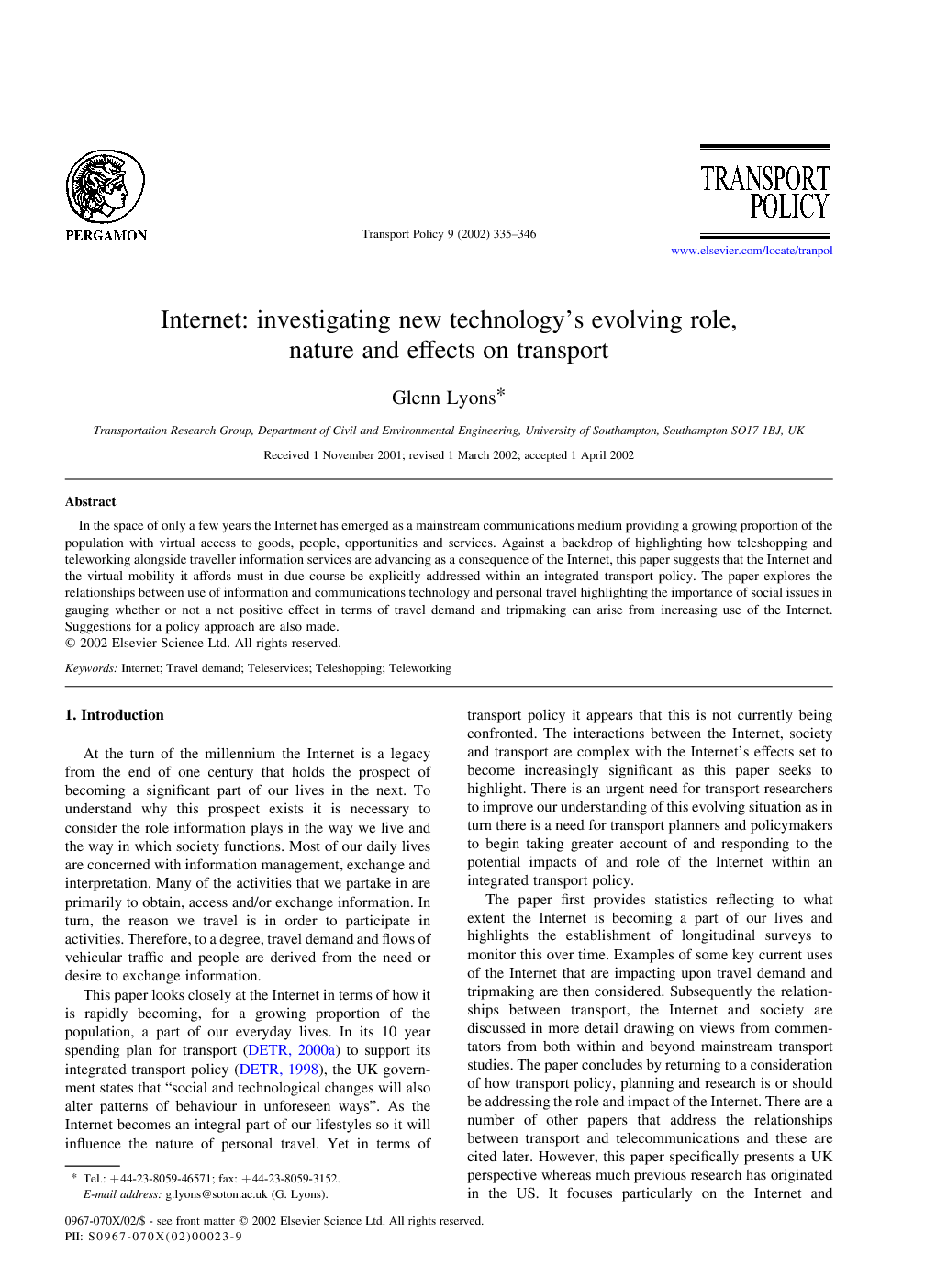 In the space of only a few years the Internet has emerged as a mainstream communications medium providing a growing proportion of the population with virtual access to goods, people, opportunities and services. Against a backdrop of highlighting how teleshopping and teleworking alongside traveller information services are advancing as a consequence of the Internet, this paper suggests that the Internet and the virtual mobility it affords must in due course be explicitly addressed within an integrated transport policy. The paper explores the relationships between use of information and communications technology and personal travel highlighting the importance of social issues in gauging whether or not a net positive effect in terms of travel demand and tripmaking can arise from increasing use of the Internet. Suggestions for a policy approach are also made.

At the turn of the millennium the Internet is a legacy from the end of one century that holds the prospect of becoming a significant part of our lives in the next. To understand why this prospect exists it is necessary to consider the role information plays in the way we live and the way in which society functions. Most of our daily lives are concerned with information management, exchange and interpretation. Many of the activities that we partake in are primarily to obtain, access and/or exchange information. In turn, the reason we travel is in order to participate in activities. Therefore, to a degree, travel demand and flows of vehicular traffic and people are derived from the need or desire to exchange information. This paper looks closely at the Internet in terms of how it is rapidly becoming, for a growing proportion of the population, a part of our everyday lives. In its 10 year spending plan for transport (DETR, 2000a) to support its integrated transport policy (DETR, 1998), the UK government states that “social and technological changes will also alter patterns of behaviour in unforeseen ways”. As the Internet becomes an integral part of our lifestyles so it will influence the nature of personal travel. Yet in terms of transport policy it appears that this is not currently being confronted. The interactions between the Internet, society and transport are complex with the Internet's effects set to become increasingly significant as this paper seeks to highlight. There is an urgent need for transport researchers to improve our understanding of this evolving situation as in turn there is a need for transport planners and policymakers to begin taking greater account of and responding to the potential impacts of and role of the Internet within an integrated transport policy. The paper first provides statistics reflecting to what extent the Internet is becoming a part of our lives and highlights the establishment of longitudinal surveys to monitor this over time. Examples of some key current uses of the Internet that are impacting upon travel demand and tripmaking are then considered. Subsequently the relationships between transport, the Internet and society are discussed in more detail drawing on views from commentators from both within and beyond mainstream transport studies. The paper concludes by returning to a consideration of how transport policy, planning and research is or should be addressing the role and impact of the Internet. There are a number of other papers that address the relationships between transport and telecommunications and these are cited later. However, this paper specifically presents a UK perspective whereas much previous research has originated in the US. It focuses particularly on the Internet and personal travel rather than the broader fields of telecommunications and transport (though this is not to imply that the uses and impacts of the Internet do not extend into other aspects of transport).