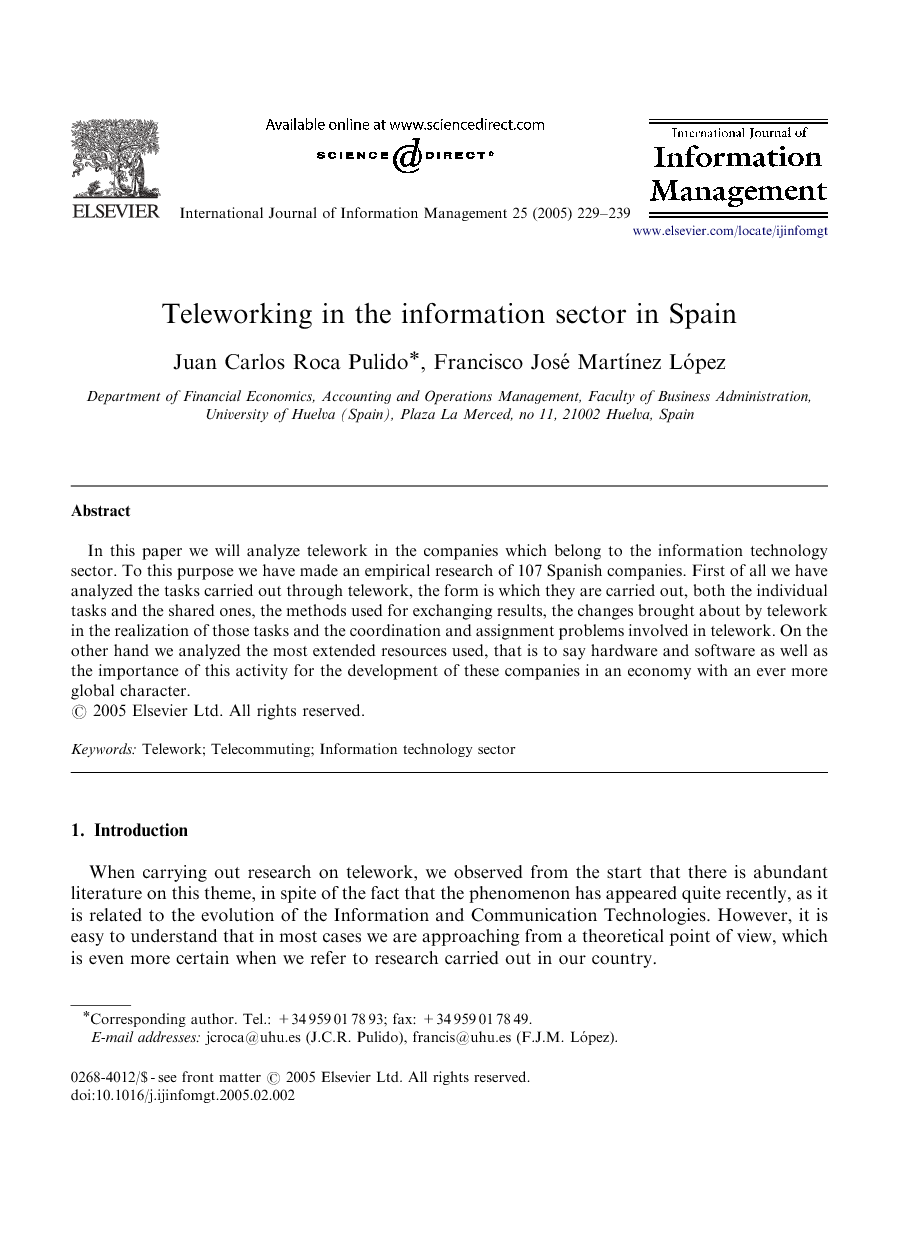 In this paper we will analyze telework in the companies which belong to the information technology sector. To this purpose we have made an empirical research of 107 Spanish companies. First of all we have analyzed the tasks carried out through telework, the form is which they are carried out, both the individual tasks and the shared ones, the methods used for exchanging results, the changes brought about by telework in the realization of those tasks and the coordination and assignment problems involved in telework. On the other hand we analyzed the most extended resources used, that is to say hardware and software as well as the importance of this activity for the development of these companies in an economy with an ever more global character.

When carrying out research on telework, we observed from the start that there is abundant literature on this theme, in spite of the fact that the phenomenon has appeared quite recently, as it is related to the evolution of the Information and Communication Technologies. However, it is easy to understand that in most cases we are approaching from a theoretical point of view, which is even more certain when we refer to research carried out in our country. In our opinion, it is necessary to approach the question empirically, both from the point of view of the company and from that of the teleworker. For the company and on the one hand, the interesting points are the influence of telework on planning, control and realization of the tasks, both on the methods and on the means used. On the other hand, the changes caused on the market, the process of decision making or the influence on the organizational culture. As for the teleworkers, their concerns are their working conditions, collective rights, safety and hygiene at work, and for the most part, the advantages and drawbacks caused by telework, which are a basic reference if we want to know the real dimension of it. All these themes are of great importance for those who are interested in telework. In this paper we intend to advance in its study from an empirical point of view; we therefore thought it was of interest to find out about the different forms of telework present in computing and communications companies in Spain and to go deeply into the analysis of the tasks carried out through telework, as well as to find out about the changes caused in these tasks, with regard to its interdependency, planning, teamwork systems and the flow of information, analyzing the role the IT companies play in it. The reasons that justify why we choose this sector are, on the one hand, the greater probability of the presence of companies that fulfill the requirements necessary for the development of telework, the intensive use of new technologies and on the other hand, the experience of similar companies in other countries. At the same time we have gathered the most important opinions published recently by knowledgeable authors and institutions, turning to bibliography both in digital form and printed, on the concept of telework.

It can be stated that more than a third of the companies in the IT sector usually work with this type of tool for their organization, being the telework done at home the most important variety, followed by mobile telework. We can emphasize that as for the telework done at home the most frequently used tasks are software development, document revision, data analysis and input. Mobile telework is more frequently used for sales, research and customer service. In both varieties, the tasks have to be completed by a colleague who is not a teleworker in almost half of the companies. Although we have found no significant differences as for the method by which the results of the tasks are transmitted, e-mail is mostly used. Some of the difficulties normally imputed to telework arise uniformly with independence from the variety of telework, for instance, lack of knowledge of the state of the tasks at a given moment, misunderstandings and lack of planning. Other problems, like doubts that cannot be solved remotely, have more impact in telecentres. With regard to the resources used, in companies that have telework programs carried out at home, the PC, as well as dataming are most frequently used. As for companies with teleworkers in telecentres, it was found that they use more applications like SAP R3 and electronic data exchange. The most outstanding feature of the mobile telework type is a greater remote access to the company's applications. The exchange or transmission of the results do not present significant differences according to the variety of telework, and it is done by e-mail and in personal meetings. Finally, some of the difficulties usually imputed to telework, arise uniformly irrespective of the analyzed variety, although the impact on the performance of the IT sector companies is not relevant. In any case, we have detected that the only problem that arises frequently, in a significant proportion, is the lack of knowledge on the state of being of the tasks at any given moment. Among those problems that arise occasionally, the doubts that cannot be solved remotely as well as misunderstandings are outstanding. We also noted that a third of the answers implied that these problems never occur. Telework is thus a new way of conceiving the organization, that can revolutionize the structure of the companies; although, even in the companies that are more used to new technologies, as are those analyzed in our study, there is still a long way to go in order to transform telework as a tool into an “organizational philosophy”.