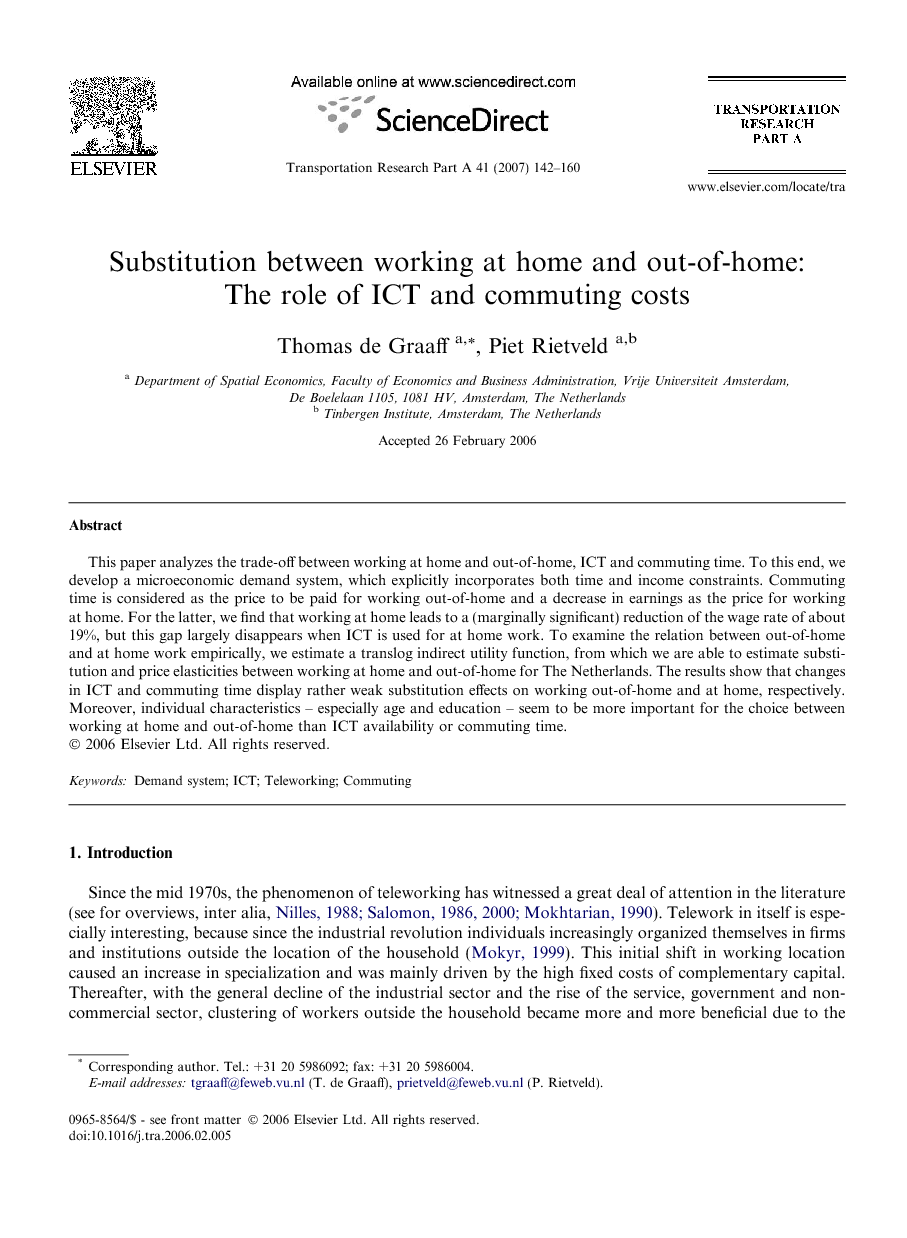 This paper focuses on the relation between commuting time, ICT and working at home. To do so, we develop a theoretical framework where preferences for working at home and out-of-home enter the utility function directly. To construct a full system of demand equations, we first derive an implicit price for working at home, which is relative to working out-of-home. It turns out that for workers at home wages are 19% lower than for workers out-of-home – however, only marginally significant. Moreover, this gap diminishes with 80% when workers have access to an internet connection. With the use of the theoretical labor supply model and the wage equation, we specify a demand system based on the translog utility function, taking working at home, working out-of-home and leisure time directly into account. We account for group-specific differences in preferences for activities by incorporating individual characteristics in each demand equation. With this demand system, we are empirically able to find price and substitution elasticities between working at home and out-of-home. The main results are that (i) working at home and out-of-home act as (slightly imperfect) substitutes, conditional on individual characteristics, and (ii) changes in commuting time and ICT availability have small absolute effects on working at home and out-of-home, respectively. Therefore, working at home and out-of-home seems to be more determined by individual characteristics than by (changes in) commuting time and ICT availability. Age and education, and to a lesser extent sex and job characteristics turn out to be important. Although the results are intuitive (at least for the case of The Netherlands), some further research is yet warranted. The fact that some workers are physically prevented to work at home – because of the nature of their job – can still be accounted for by sector dummies. However, more explicit modeling of the behavior of firms is called for in order to explain why some firms within the same sector allow their employees to work at home and others do not. Another barrier to working at home is that some workers who are able and willing to work at home do not have the required workspace available at home. Therefore, further research is needed to incorporate residential constraints. Moreover, the implicit prices of working at home need more variation. Possibly, some workers may even experience positive productivity effects from working at home (e.g., in the short run). Also, prices are now assumed proportional to the wage rate and the activity involved (working at home and out-of-home). Using a fixed and variable cost component may introduce a much more complex and realistic model. However, for such extended analyses additional information on ICT availability and wages is required. An additional avenue of future research is a direct modeling of maintenance activities, instead of treating them as rest categories. However, as long as maintenance activities can be regarded as derived demand, and given that they are sufficiently accounted for by the incorporation of individual characteristics – such as having children, type of household, etc. – in the demand equations, there is no reason to believe that our present estimations are biased. Related to that issue, the inclusion of trade-offs between working partners within two-earner households might shed some new light on the trade-off between working at home and out-of-home. Finally, we would like to stress that by treating commuting time exogenous we constructed a short-run model. Namely, in the long-run it may well be that workers decide to move residence further from work when increasing their at home labor supply.