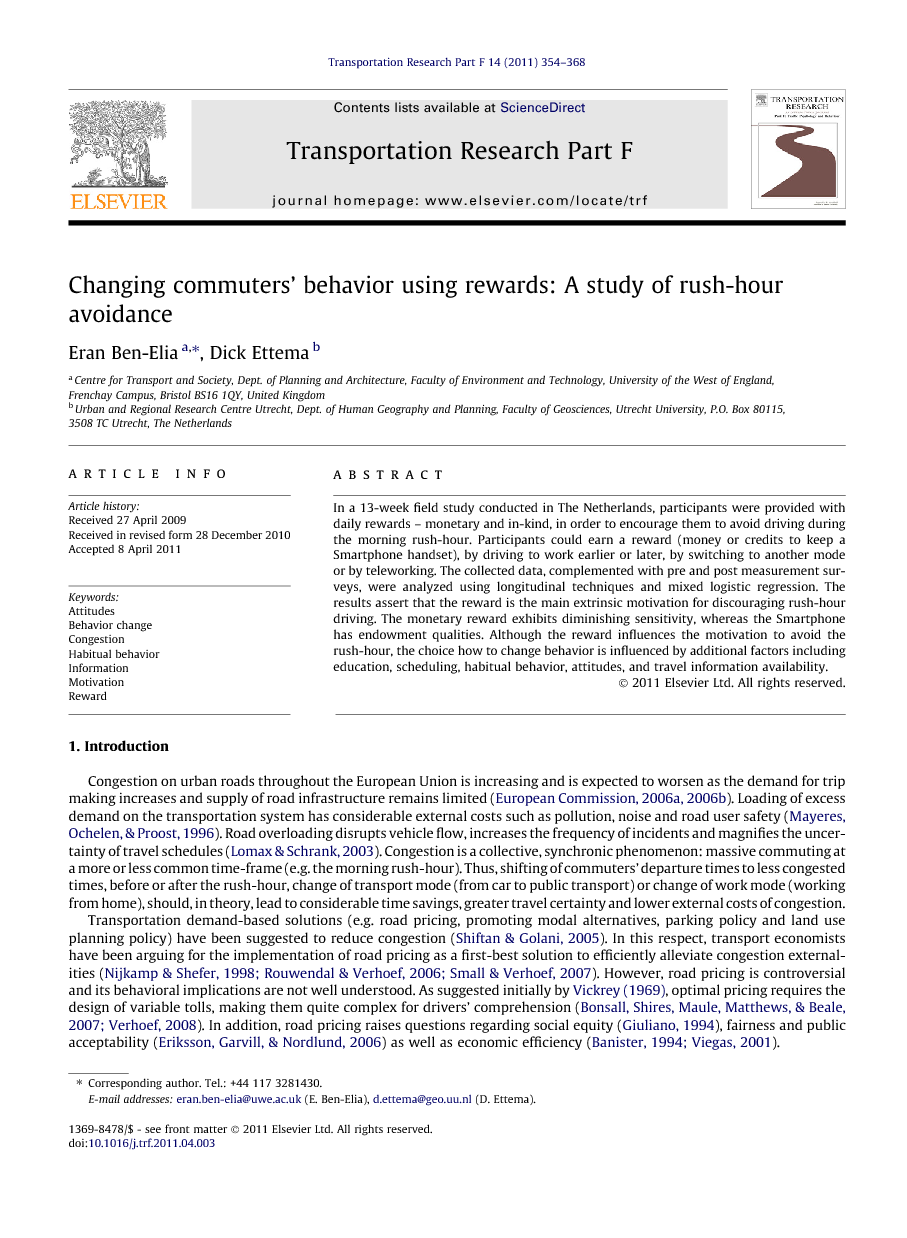 In a 13-week field study conducted in The Netherlands, participants were provided with daily rewards – monetary and in-kind, in order to encourage them to avoid driving during the morning rush-hour. Participants could earn a reward (money or credits to keep a Smartphone handset), by driving to work earlier or later, by switching to another mode or by teleworking. The collected data, complemented with pre and post measurement surveys, were analyzed using longitudinal techniques and mixed logistic regression. The results assert that the reward is the main extrinsic motivation for discouraging rush-hour driving. The monetary reward exhibits diminishing sensitivity, whereas the Smartphone has endowment qualities. Although the reward influences the motivation to avoid the rush-hour, the choice how to change behavior is influenced by additional factors including education, scheduling, habitual behavior, attitudes, and travel information availability.

Congestion on urban roads throughout the European Union is increasing and is expected to worsen as the demand for trip making increases and supply of road infrastructure remains limited (European Commission, 2006a and European Commission, 2006b). Loading of excess demand on the transportation system has considerable external costs such as pollution, noise and road user safety (Mayeres, Ochelen, & Proost, 1996). Road overloading disrupts vehicle flow, increases the frequency of incidents and magnifies the uncertainty of travel schedules (Lomax & Schrank, 2003). Congestion is a collective, synchronic phenomenon: massive commuting at a more or less common time-frame (e.g. the morning rush-hour). Thus, shifting of commuters’ departure times to less congested times, before or after the rush-hour, change of transport mode (from car to public transport) or change of work mode (working from home), should, in theory, lead to considerable time savings, greater travel certainty and lower external costs of congestion. Transportation demand-based solutions (e.g. road pricing, promoting modal alternatives, parking policy and land use planning policy) have been suggested to reduce congestion (Shiftan & Golani, 2005). In this respect, transport economists have been arguing for the implementation of road pricing as a first-best solution to efficiently alleviate congestion externalities (Nijkamp and Shefer, 1998, Rouwendal and Verhoef, 2006 and Small and Verhoef, 2007). However, road pricing is controversial and its behavioral implications are not well understood. As suggested initially by Vickrey (1969), optimal pricing requires the design of variable tolls, making them quite complex for drivers’ comprehension (Bonsall et al., 2007 and Verhoef, 2008). In addition, road pricing raises questions regarding social equity (Giuliano, 1994), fairness and public acceptability (Eriksson, Garvill, & Nordlund, 2006) as well as economic efficiency (Banister, 1994 and Viegas, 2001). Second-best schemes have been suggested to circumvent the difficulties in implementing first-best pricing solutions (Small & Verhoef, 2007). In The Netherlands the notion of using rewards to achieve desired outcomes in travelers’ behavior has been recently implemented in the context of the Spitsmijden1 program (Ettema et al., 2010 and Knockaert et al., 2007), thus far, the largest systematic effort to analyze the potential of rewards in the field as a policy mean for changing commuter behavior. A pilot study (see Section 3 for further details), involving 340 participants and lasting over 13 weeks, was organized in the second half of 2006. Its objective was to investigate, in an empirical field study, the potential impacts of rewards on commuters’ behavior during the morning rush-hour. Participants could earn a reward (money or credits to keep a Smartphone handset which also provided real-time traffic information), by driving to work earlier or later, by switching to another travel mode or by teleworking. Initial results provided evidence of substantial behavior change in response to the rewards, with commuters shifting to earlier and later departure times and more use of public transport and alternative modes or working from home (Ettema et al., 2010). The effectiveness of rewards to reinforce a desirable behavior (e.g. identification and loyalty, work effort) is supported by a large volume of empirical evidence (Kreps, 1997 and Berridge, 2001). However, in the context of travel and traffic behavior, rewards are poorly represented. Punishments and enforcement (such as policing, felony detectors, and fines), have been more widely documented than rewards (e.g. Rothengatter, 1992, Perry et al., 2002 and Schuitema, 2003). The relative salience of negative motivational means reflects, to a large extent, a disciplinary bias. Given that travel behavior has been to the most part subjected and influenced by microeconomic theories (McFadden, 2007), it is not surprising that the behavioral rationale of many demand based strategies to manage traffic congestion is based on negative incentives that associate, through learning, the act of driving with punishments (such as tolls or increased parking costs). The few examples where rewards have been applied in a travel context are short term studies involving the use of a temporary free bus ticket as an incentive to reduce car driving. To most parts, the results of these studies are inconclusive. For example, Fujii et al., 2001 and Fujii and Kitamura, 2003 found that an incentive did encourage a change towards reducing car driving; however the level of car driving returned to previous levels once the incentive was stopped. In contrast, Bamberg et al., 2002 and Bamberg et al., 2003, found that habitual behavior prevented substantial reductions in car use. It is not the scope of this paper to debate which policy (pricing or rewards) is more effective. However there is substantial evidence that people respond more favorably and are more motivated when rewarded rather than punished (Kahneman and Tversky, 1984 and Geller, 1989). Thus, the potential of rewards as a base for traffic management policy is well worth considering if based on robust behavioral foundations. The main aim of this paper is to comprehensively analyze and explore the changes in behavior during the course of the aforementione pilot study and identify key factors that influence the response to the rewards. The rest of the paper is organized as follows: Section 2 sets a number of theoretically driven research questions and hypotheses. Section 3 describes the experimental setup and methods. Results, based on a mixed logistic regression analysis are presented in Section 4. A discussion is presented in Section 5, followed by summary and conclusions in Section 6.

The main conclusion regarding the use of rewards in encouraging commuters to change behavior is that it actually works. Rewards are effective extrinsic motivators for travel behavior change – here rush-hour avoidance. The monetary reward was likely perceived as a gain with diminishing sensitivity, whereas the Yeti should be regarded as an in-kind reward which had added endowment and instrumental qualities. The rewards were able to sustain the behavioral change throughout the experiment. Nonetheless, it is still an open question whether the change can be sustained in the long run and without rewards. We do not have enough post-test observations to provide an answer apart from subjective assessments by the participants. A second conclusion that can be drawn from this research is that the reward influences the magnitude of change – an increase or decrease in rush-hour avoidance. However the choice how to avoid – driving at other times, switching to another mode of transport or working from home, is determined by external factors relating to participants’ personal and social characteristics, scheduling flexibility, history and information availability, Although already of some interest to the travel behavior research community these issues deserve further attention in future research. As a closing remark, following the success of the current study, application of reward-based schemes is now taking place across The Netherlands. Although some concern, based on traffic simulation models, indicated that too many people might start changing their schedules to gain a reward (Bliemer & van Amelsfort, 2008), the evidence in the field does not support this claim. Rewards’ effectiveness in mitigating congestion, especially in situations involving temporary road and bridge maintenance or lane closures has been verified (Bliemer, Dicke-Ogenia, & Ettema, 2009). A recent survey of firms also has shown positive attitude amongst employers towards the reward scheme (Vonk Noordegraaf & Annema, 2009). The majority of the Dutch public (apart for the public transport users who are ineligible and consequently grumbling) and the government were quite content with the results. However as recently published in the media the (last) government also wanted to advance a ‘punishment’ policy through universal kilometer road charging – a decision that stresses the importance of well-informed, evidence-based, as well as behaviorally-sound public policy.