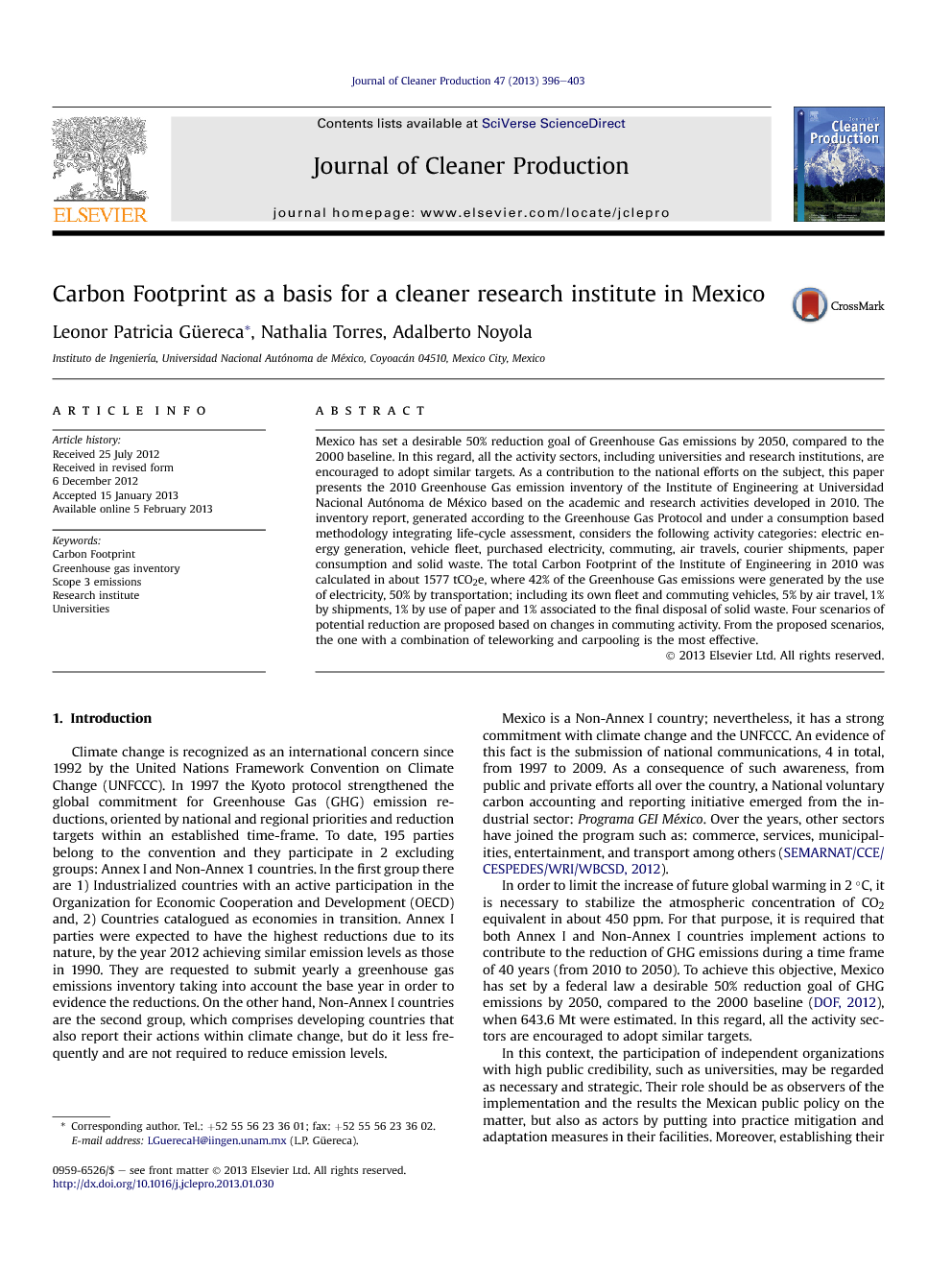 Mexico has set a desirable 50% reduction goal of Greenhouse Gas emissions by 2050, compared to the 2000 baseline. In this regard, all the activity sectors, including universities and research institutions, are encouraged to adopt similar targets. As a contribution to the national efforts on the subject, this paper presents the 2010 Greenhouse Gas emission inventory of the Institute of Engineering at Universidad Nacional Autónoma de México based on the academic and research activities developed in 2010. The inventory report, generated according to the Greenhouse Gas Protocol and under a consumption based methodology integrating life-cycle assessment, considers the following activity categories: electric energy generation, vehicle fleet, purchased electricity, commuting, air travels, courier shipments, paper consumption and solid waste. The total Carbon Footprint of the Institute of Engineering in 2010 was calculated in about 1577 tCO2e, where 42% of the Greenhouse Gas emissions were generated by the use of electricity, 50% by transportation; including its own fleet and commuting vehicles, 5% by air travel, 1% by shipments, 1% by use of paper and 1% associated to the final disposal of solid waste. Four scenarios of potential reduction are proposed based on changes in commuting activity. From the proposed scenarios, the one with a combination of teleworking and carpooling is the most effective.

Universities and research centers are institutions that highly influence society and hence, should take the lead on all issues related to Carbon Footprint reduction since those are places where professionals receive education, knowledge is generated and many technologies are developed. Scope 3 emissions are very significant for the II-UNAM as well as for some other universities. However, comparison between institutions is not reliable, because each single case considers different activities. In this sense, it is necessary to define limits (boundaries) for emission calculation under this specific Scope. In this study, commuting represents the activity with the largest amount of emissions, so the implementation of a mitigation program becomes a strategic action. From the Carbon Footprint mitigation scenarios analyzed, the most efficient measure in reducing GHG is to change commuting patterns by practicing remote working and private car sharing (scenario 4). The use of electricity has the second largest Carbon Footprint, making necessary to improve the lighting systems in order to achieve a more efficient energy use. Air travel, paper consumption, waste management and package delivery are activities with very low contributions for the II-UNAM Carbon Footprint. As research activities are likely to incorporate cleaner production practices, it is necessary to start using appropriate indicators in order to carry out performance comparisons between institutions. In this sense, the Carbon Footprint of research products such as scientific papers, books or chapters of books and patents, is recommended because these are the main outputs of research activity. Given the size of the UNAM and its student, academic and staff population, it is recommended to expand the Carbon Footprint results to the entire university in order to establish a comprehensive program for the entire Campus.