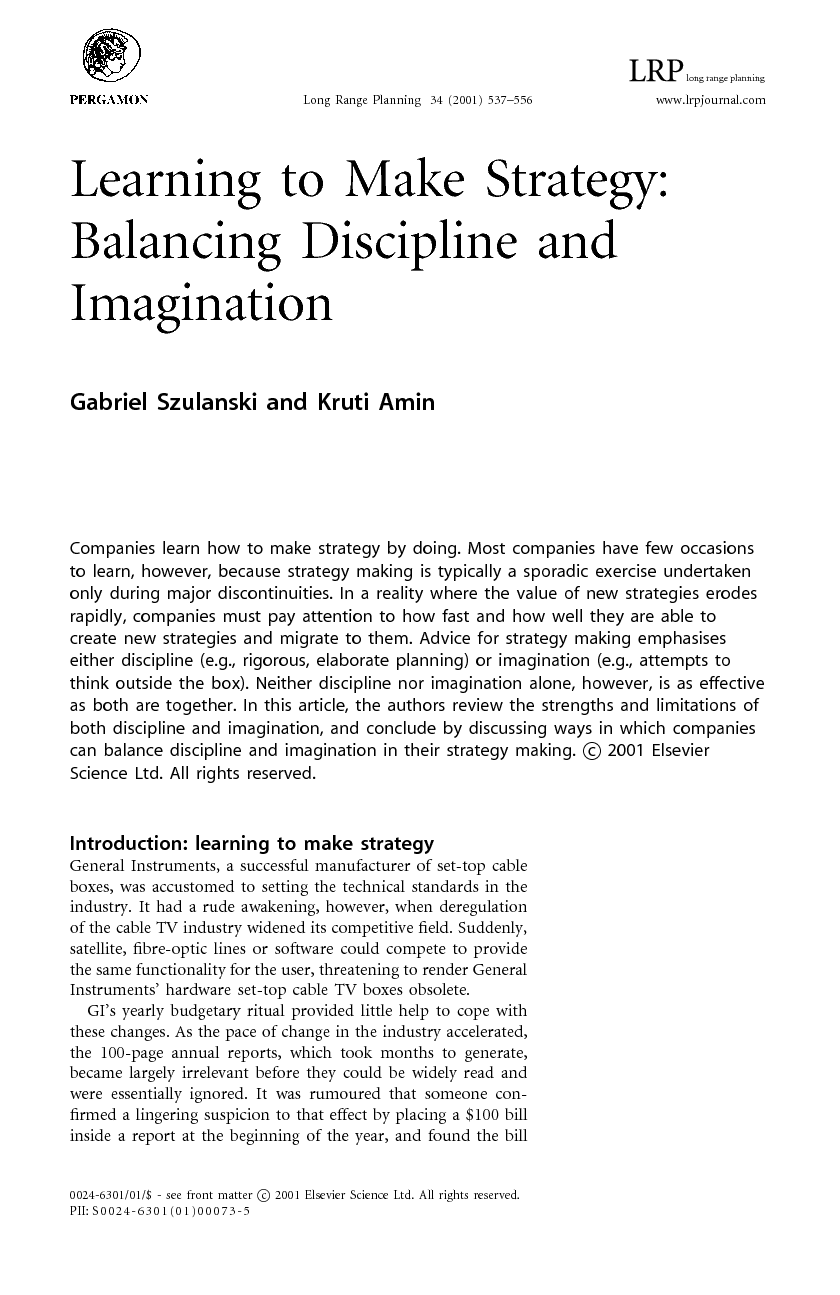 Companies learn how to make strategy by doing. Most companies have few occasions to learn, however, because strategy making is typically a sporadic exercise undertaken only during major discontinuities. In a reality where the value of new strategies erodes rapidly, companies must pay attention to how fast and how well they are able to create new strategies and migrate to them. Advice for strategy making emphasises either discipline (e.g., rigorous, elaborate planning) or imagination (e.g., attempts to think outside the box). Neither discipline nor imagination alone, however, is as effective as both are together. In this article, the authors review the strengths and limitations of both discipline and imagination, and conclude by discussing ways in which companies can balance discipline and imagination in their strategy making.

General Instruments, a successful manufacturer of set-top cable boxes, was accustomed to setting the technical standards in the industry. It had a rude awakening, however, when deregulation of the cable TV industry widened its competitive field. Suddenly, satellite, fibre-optic lines or software could compete to provide the same functionality for the user, threatening to render General Instruments' hardware set-top cable TV boxes obsolete. GI's yearly budgetary ritual provided little help to cope with these changes. As the pace of change in the industry accelerated, the 100-page annual reports, which took months to generate, became largely irrelevant before they could be widely read and were essentially ignored. It was rumoured that someone confirmed a lingering suspicion to that effect by placing a $100 bill inside a report at the beginning of the year, and found the bill in exactly the same place a year later. The gears of the strategic planning process turned meaninglessly at GI. Ed Breen, the chief executive, along with a few other members of the senior management team, had an idea of how the company could respond, but they knew it would be essential for the entire senior management team to agree on a strategy to mobilise the organisation. To this end, 20 senior managers gathered for a three-day retreat in the woods of Kiawah, South Carolina. There, together with an outside facilitator, the group evaluated GI's situation and discussed a vision for the future of the company. For Breen, the meeting would be successful if it served to generate buy-in and commitment among top-level managers. By the end of the meeting, GI had a new strategy ready to put in place. Recognising that strategy making in the rapidly changing environment would have to happen more often, Dick Smith, Senior Vice-President of Business Development and an instrumental player in the strategy making process, wondered how GI should approach strategy making. The current planning process was clearly ineffective. Furthermore, the Kiawah experience did not seem easily repeatable: even though it accomplished the goal of defining the future direction of the company, some managers thought it excessive to devote three full days for that sole purpose, considering the day-to-day issues that had to be dealt with “in the trenches”. Smith wondered what kind of intervention he could devise that would meet GI's new-found needs for strategy making. GI's situation is increasingly commonplace. In a reality where the window of opportunity for a strategy to generate new wealth is steadily shortening, new strategies have to be constructed more often. The demands of the dynamic and competitive business environment can potentially overwhelm an organisation's tried-and-true methods for making strategy. Companies feel the need to hone their capability for strategy making, the capability to create quality strategies more frequently. Value creation, and indeed survival, has become intimately associated with the ability to continually create innovative business strategies. Such capability must be learned by doing. While generic recipes for strategy making are available, most companies have few occasions to put them in practice, because strategy making is typically a sporadic effort undertaken only during major discontinuities. Outside help is always available, but not always effective. For this reason, the new reality is making it gradually and—for some—rather painfully apparent that new wealth creation requires more than enforcing rigorous planning or embarking in ad-hoc efforts to set up strategy with outside facilitation.1 Smith's quandary reflects that of many senior executives who are responsible for devising ways to enhance the strategy making capabilities of their organisations. He had several options to ponder. First, Kiawah-like meetings could be held whenever strategy making was needed. Second, the company could try to reinstitute the creative phase, the original Phase 0, of its now mainly budget-setting approach. Phase 0 in GI's original three-step planning process, since eliminated, involved a creative brainstorming effort that preceded the creation of the yearly plan for each business unit, and the crafting of detailed implementation and financing plans. Finally, there was the option of dismantling the budget-focused process and starting with a clean slate. Dick Smith knew that GI had to enhance the sophistication of its strategy making to deal with the accelerating environment—but, he wondered, how should strategy making now be approached at GI?

Achieving and sustaining disciplined imagination appears to be a worthy guidepost for strategy making. With this in mind, a few concluding remarks are in order. It is useful to begin by noting that there can be no discipline without imagination, variation and exploration. The first question one must ask is whether there is a stream or at least a stock of ideas, projects or ventures that can serve as fodder for a disciplined process of selection. If it is missing, then recreating it must be the first step. Enron's example is perhaps extreme but as Stopford notes, a common first step. Sometimes, however inspiration may not be sufficient or there is no time to let the process emerge spontaneously. In such situations, the intervention must provide process know-how. Finally, as the ODD and the Sonera examples illustrate, in rapidly transforming industries, the intervention must stem or redirect experimentation. The example of GasCo raises the issue of whether imagination could be infused into a platform of existing discipline; perhaps the old discipline had to be eliminated, imagination reinstalled and, only then, a new kind of discipline developed. It was possible that trying to infuse the highly formal disciplined process to an existing set of creative experiments and alternatives would have the same effect as throwing sand into the gears of an elaborate machine—either the existing process would kick out the irritant, or the irritant would stall the machine. In other words, would discipline accept imagination, or would imagination actually stall the process? We suggested a relatively simple typology of interventions, geared to either increase, guide or stem imagination to re-establish balance. The most appropriate one to use can be determined once one knows the specific situation the company is facing. Is the problem a lack of imagination, or is it a lack of discipline? Or perhaps both? Conversely, could it be that the situation is already balanced and any further intervention would be detrimental? Dick Smith's conundrum can now be approached from this vantage point. Clearly intervention was necessary. However, was GI's problem lack of discipline, lack of imagination or both? GI's culture had been described by external observers as one of “cable cowboys”,44 young swashbucklers who are used to generating ad-hoc responses to a changing environment through informal interaction. This suggests that chaos was rampant and a variety-decreasing intervention would have been appropriate. Yet, when one asks the question as to exactly what there is to be disciplined, the answer is a set of initiatives to respond to immediate customer problems but that are not focused on the emerging opportunities and threats of the new deregulated environment. Thus, upon closer scrutiny variety was of the wrong kind, and indeed little useful experimentation was being undertaken. Imagination had to be reinstated and focused towards answering those new competitive developments. In this respect, the Kiawah meeting seemed appropriate. GI emerged from that with a new strategic direction and a set of specific goals. Attempting to impose a new process would have been difficult in such a free-wheeling culture, as would have been attempting to restore the creative phase of the planning process, which had been earlier rejected by that same decision making culture. Using an off-site environment, such as Kiawah was therefore the most appropriate intervention from those considered by the company and the one that GI continued to pursue even after it was acquired by Motorola in a transaction that valued the company at $17 billion, more than four times the capitalisation of the company at the time of the first Kiawah meeting. GI's conundrum is representative of that of many companies. Strategy making has to happen more often; today's rapidly changing reality tests an organisation's true ability to innovate strategically, exposing the precariousness of paralysing excesses of discipline or chaotic creative efforts. Strategy making in fast moving environments requires the capacity to intervene effectively on strategy making, the development of a different kind of discipline that allows for a greater involvement of the imagination. The choice is no longer between one of the two. Both seem necessary. That said, it is important to remember also that strategy-making sophistication develops with practice. The hallmark of such sophistication is the ability to suit strategy making to the characteristics of specific situations, as well as organisational cultures. When the environment accelerates, the organisational capability to make strategies is put to the test. A study of 285 top managers found that firms that were capable of making strategy in multiple modes in response to different situations outperformed those that used only one model or were less process-capable.45 The same interventions may have different effects in different companies or under different circumstances. Thus, perhaps as important as selecting the proper intervention is keeping in mind that strategy making is a learned organisational skill. How to maintain an adequate balance between discipline and imagination must be learned by doing.