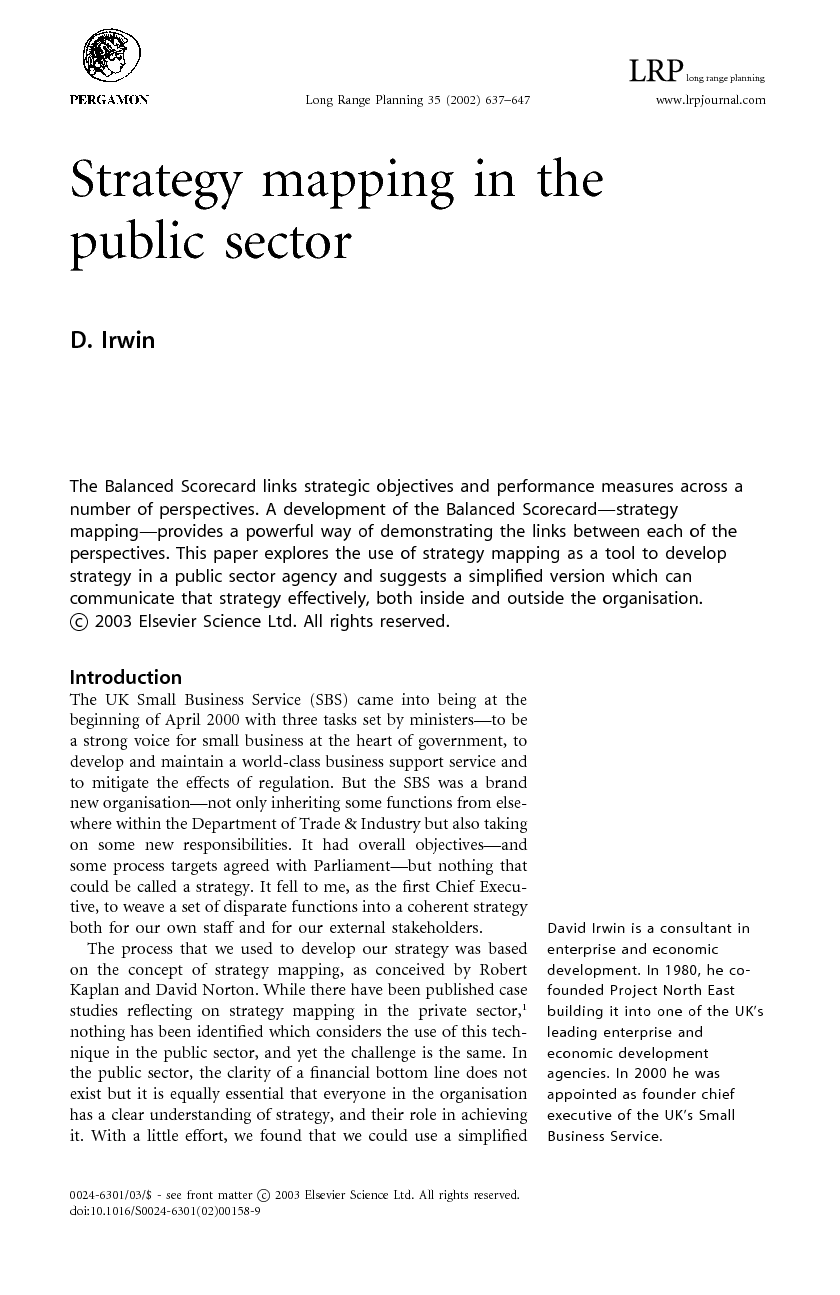 The Balanced Scorecard links strategic objectives and performance measures across a number of perspectives. A development of the Balanced Scorecard—strategy mapping—provides a powerful way of demonstrating the links between each of the perspectives. This paper explores the use of strategy mapping as a tool to develop strategy in a public sector agency and suggests a simplified version which can communicate that strategy effectively, both inside and outside the organisation.

With their new ideas of strategy mapping, Kaplan and Norton have developed a powerful technique that can be applied to any business and non-profit organisation.9 The model may have its faults: what is important is that it provides a framework which encourages users to think logically about the different elements of their strategy and to consider how those elements interact. Having a clear vision, and a strategy to achieve that vision, is just as important in a statutory or not-for-profit organisation as it is in a for-profit company. In both cases, organisations often lack a customer focus. Strategy mapping is just a tool. But it is a very effective tool in ensuring an understanding of the role of strategy and how an effective strategy encompasses all of an organisation’s activities. Strategy mapping reminds organisations about the different strategic perspectives, and ensures that they are all taken into account. I would, however, echo the views of Prof Heinz Ahn10 that the four perspectives need to be adapted to the individual needs of the organisation—in the case of the SBS, simply changing the name of each perspective made a huge difference. Strategy mapping can be applied at directorate level as well as at organisational level. Whilst a final strategy may well be quite complex, strategy mapping allows (indeed, encourages) organisations to start with a simple view which aids understanding of each of the perspectives and how they relate to each other. Use of the process within the SBS stimulated considerable debate about the way in which objectives impinged on one another and assisted in leading to a consensus about what was important. The technique could be used by any public sector organisation. The starting point is to be absolutely clear about your customers and what it is that they need from you. How close is the UK to achieving the vision? A 2002 study by the Economist Intelligence Unit and Apax Partners11 ranked the UK second out of 60 countries surveyed—so it seems that real progress is being made.