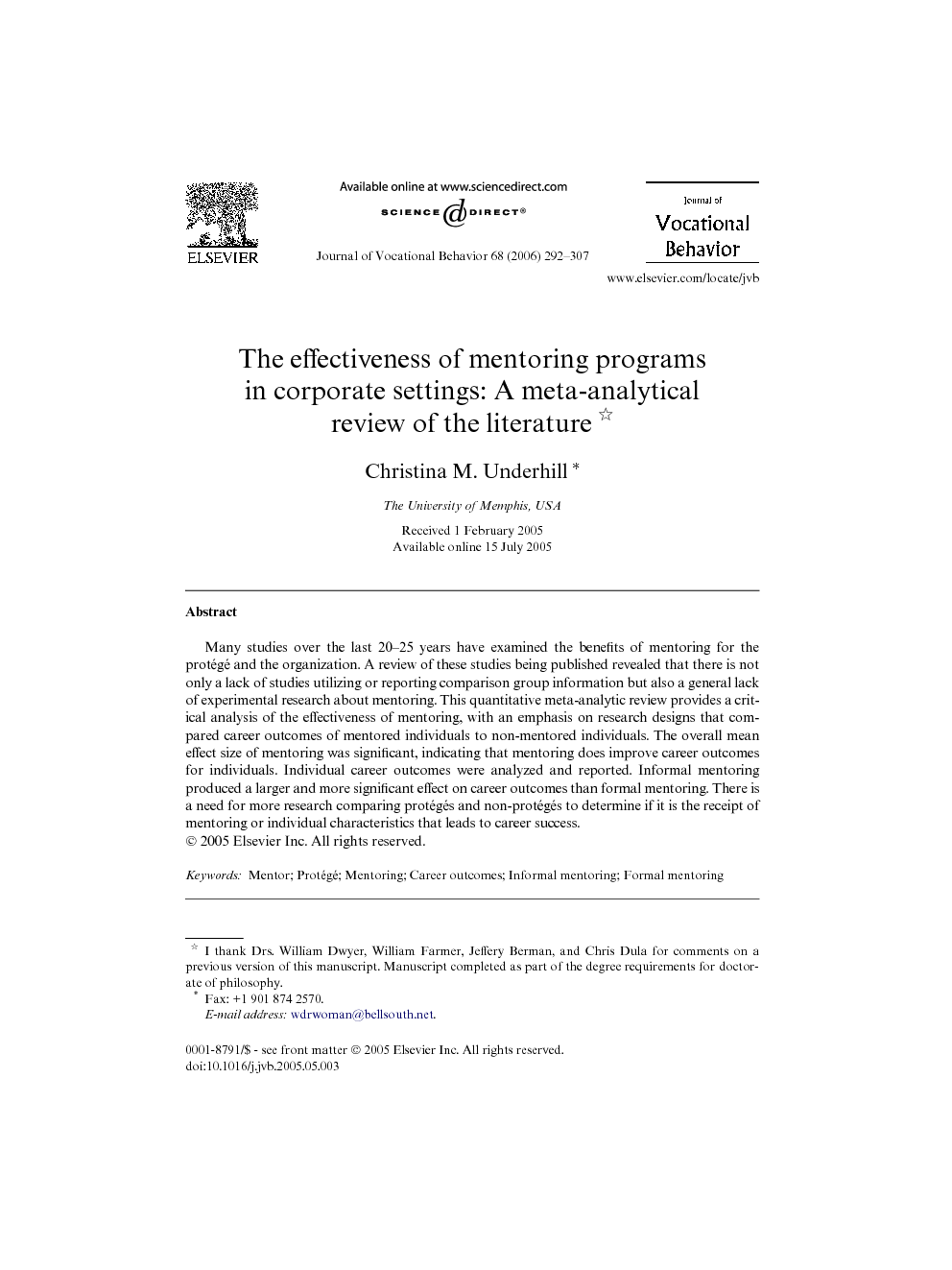 Many studies over the last 20–25 years have examined the benefits of mentoring for the protégé and the organization. A review of these studies being published revealed that there is not only a lack of studies utilizing or reporting comparison group information but also a general lack of experimental research about mentoring. This quantitative meta-analytic review provides a critical analysis of the effectiveness of mentoring, with an emphasis on research designs that compared career outcomes of mentored individuals to non-mentored individuals. The overall mean effect size of mentoring was significant, indicating that mentoring does improve career outcomes for individuals. Individual career outcomes were analyzed and reported. Informal mentoring produced a larger and more significant effect on career outcomes than formal mentoring. There is a need for more research comparing protégés and non-protégés to determine if it is the receipt of mentoring or individual characteristics that leads to career success.

1.1. Purpose The purpose of this review is to provide a quantitative summary of the effectiveness of mentoring in the workplace. There has been a wealth of published information on mentoring since the most recent critical review in 1983. Since then, however, there has been no scholarship published that provides a serious evaluation of the mentoring research being conducted. This review provides a critical analysis of the results of mentoring research, emphasizing those research designs that compared career outcomes of individuals who received mentoring to those who did not. As mentoring likely has important implications for both career and organizational outcomes, it is crucial to understand the extent of the relationship mentoring has with desired outcomes while accounting for the effects of other potential confounding variables. Focusing on studies with comparison groups will provide a more solid foundation upon which to assess the effect mentoring has on improving a person’s career outcomes. 1.2. Background on mentoring research In 1983, Merriam published the first critical review of the literature on mentoring. At that time mentoring was believed to create success in the career of the protégé, but this belief was not readily substantiated by research at the time. Mentoring studies were scattered across disciplines and had not been examined to identify common findings and trends (Merriam, 1983). Since then mentoring has continued to be a popular topic in business and education. A search, of the most relevant scholarly databases for articles since 1983, yielded hundreds of articles. Over a hundred articles regarding mentoring adults in the workplace were obtained and classified into the type of research conducted. 1.3. Current state of mentoring research The majority of the studies or 60% were based strictly on descriptive self-report survey results. The reported survey response rates after adjusting for missing survey data ranged from 10 to 91%. Overall, the studies averaged a 50% response rate. Twenty-six (24%) of the mentoring studies were not research articles but theoretical conceptualizations or reviews of topics in mentoring. Five studies (5%) were based solely on interviews. Five (5%) articles reported results of longitudinal quasi-experiments with either a pretest–posttest measure or posttest only measure with a non-equivalent control group. Four (4%) of the studies were strictly case studies describing the establishment of mentoring programs, and only three studies involved random assignment to a mentored and non-mentored condition. Of these studies reviewed, less than 22% compared the characteristics and career outcomes of mentored versus non-mentored individuals. The lack of articles comparing mentored to non-mentored individuals is disconcerting when considering the inferences that have been made regarding the influence of mentoring on career outcomes. 1.4. Problems with studies not utilizing comparison groups Much of the research regarding over the last 20 years has focused on the positive outcomes of mentoring and how these outcomes relate to mentoring functions such as career development and psychosocial support. However, in most cases it is impossible to tell whether these outcomes were actually the result of the mentoring itself or other confounding variables for which the study has not accounted. Many of the articles claimed that mentored individuals have numerous career benefits without examining whether or not non-mentored individuals had similar or different outcomes. The process of comparison is essential to scientific inference. Without a comparison group of non-mentored people, it is more difficult to confidently attribute these career benefits to mentoring alone. Most of the studies selected for this meta-analysis present descriptive survey results. Only one was a longitudinal survey (Chao, 1997) and one was a quasi-experiment with post-test non-equivalent control group (Seibert, 1999). A major limitation to survey results is their inability to determine cause and effect. These surveys are mainly descriptive research based on self-reports of career success in which the authors explore the relationship or association between mentoring and career outcomes. They provide no independent variable manipulation and therefore do not provide enough information to eliminate rival explanations of the relationships (Singleton & Straits, 1999). Surveys that present the results of comparison groups provide a stronger inference of mentoring’s influence on career outcomes. These studies still cannot fully attribute mentoring as the cause of improved career outcomes, but they do provide stronger connections than correlational studies that only look at mentored individuals’ career success. Since there exists very few published experimental research on mentoring, analyzing survey results of comparison groups is the best choice in quantifying mentoring’s relationship to career outcomes. This meta-analysis only analyzes articles that report information from both mentored and non-mentored individuals. In 2004, Allen, Eby, Poteet, Lentz, and Lima published the first meta-analysis on the career outcomes of protégés associated with career and psychosocial mentoring functions. The researchers separately analyzed two types of studies, those that compared mentored individuals with non-mentored individuals and those that only examined the relationship between mentoring and its outcomes without a non-mentored comparison group. The career outcomes analyzed for each group were classified as subjective or objective. Objectives outcomes were tangible indicators of success such as promotions and compensation. Subjective measures of career outcomes consisted of intangible and affective indicators such as job satisfaction, commitment, and turnover intentions. A total of 43 studies were included across their separate analyses, and most of these were included in the analyses of articles that did not compare outcomes of non-protégés. Two-thirds of our respective articles with comparison groups overlapped in our separate meta-analyses. There were five articles that were included in my current meta-analysis that were not included in Allen, Eby, Poteet, Lentz, and Lima’s (2004). I coded five additional career outcomes that were not included in the Allen et al. analysis (e.g., self-esteem, perception of alternative employment opportunities, tenure in an organization, work stress, and work–family conflict). There was only one outcome reported in Allen’s analyses of comparison group articles that was not found in my article search, which was satisfaction with one’s chosen career (see Table 1 of Allen et al., 2004). This meta-analytic review differs in that it provides more career outcomes associated with mentoring while critically evaluating the methods of mentoring research with an emphasis on the importance of more rigorous designs and reporting information.

As these results show, protégés have a small but significant advantage over non-protégés. Just by looking at the sheer number of studies in support of mentoring, one would assume that mentoring does in fact provide numerous benefits to those receiving it, thereby, leaving those not mentored at a disadvantage in their career success. The small number of studies contributing information of comparison groups makes the size and significance of the effect on individual career outcomes questionable evidenced by the confidence intervals. More research is needed to provide stronger support for the effectiveness of mentoring particularly research that focused on the lesser-reported outcomes of career success. More quality studies can reduce the confidence intervals and improve the precision of the effect mentoring has on career success. More studies examining the differential effect mentoring has for males and females as well as studies evaluating the type of mentoring program are needed to confidently assess mentoring’s effectiveness in the workplace.