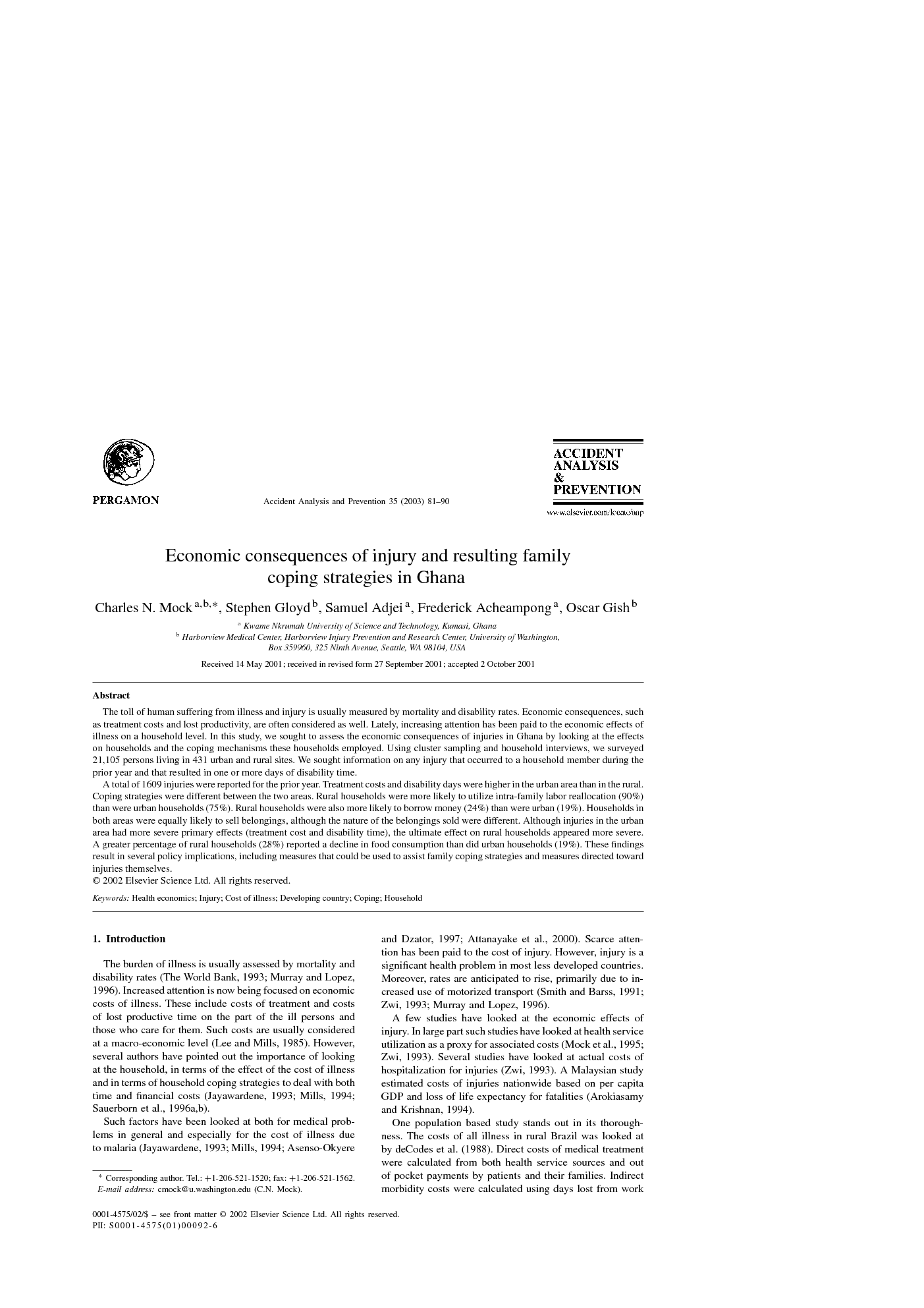 The toll of human suffering from illness and injury is usually measured by mortality and disability rates. Economic consequences, such as treatment costs and lost productivity, are often considered as well. Lately, increasing attention has been paid to the economic effects of illness on a household level. In this study, we sought to assess the economic consequences of injuries in Ghana by looking at the effects on households and the coping mechanisms these households employed. Using cluster sampling and household interviews, we surveyed 21,105 persons living in 431 urban and rural sites. We sought information on any injury that occurred to a household member during the prior year and that resulted in one or more days of disability time. A total of 1609 injuries were reported for the prior year. Treatment costs and disability days were higher in the urban area than in the rural. Coping strategies were different between the two areas. Rural households were more likely to utilize intra-family labor reallocation (90%) than were urban households (75%). Rural households were also more likely to borrow money (24%) than were urban (19%). Households in both areas were equally likely to sell belongings, although the nature of the belongings sold were different. Although injuries in the urban area had more severe primary effects (treatment cost and disability time), the ultimate effect on rural households appeared more severe. A greater percentage of rural households (28%) reported a decline in food consumption than did urban households (19%). These findings result in several policy implications, including measures that could be used to assist family coping strategies and measures directed toward injuries themselves.

The burden of illness is usually assessed by mortality and disability rates (The World Bank, 1993 and Murray and Lopez, 1996). Increased attention is now being focused on economic costs of illness. These include costs of treatment and costs of lost productive time on the part of the ill persons and those who care for them. Such costs are usually considered at a macro-economic level (Lee and Mills, 1985). However, several authors have pointed out the importance of looking at the household, in terms of the effect of the cost of illness and in terms of household coping strategies to deal with both time and financial costs (Jayawardene, 1993 and Mills, 1994; Sauerborn et al., 1996a and Sauerborn et al., 1996b). Such factors have been looked at both for medical problems in general and especially for the cost of illness due to malaria (Jayawardene, 1993, Mills, 1994, Asenso-Okyere and Dzator, 1997 and Attanayake et al., 2000). Scarce attention has been paid to the cost of injury. However, injury is a significant health problem in most less developed countries. Moreover, rates are anticipated to rise, primarily due to increased use of motorized transport (Smith and Barss, 1991, Zwi, 1993 and Murray and Lopez, 1996). A few studies have looked at the economic effects of injury. In large part such studies have looked at health service utilization as a proxy for associated costs (Mock et al., 1995 and Zwi, 1993). Several studies have looked at actual costs of hospitalization for injuries (Zwi, 1993). A Malaysian study estimated costs of injuries nationwide based on per capita GDP and loss of life expectancy for fatalities (Arokiasamy and Krishnan, 1994). One population based study stands out in its thoroughness. The costs of all illness in rural Brazil was looked at by deCodes et al. (1988). Direct costs of medical treatment were calculated from both health service sources and out of pocket payments by patients and their families. Indirect morbidity costs were calculated using days lost from work multiplied by usual wages. They found that a large component of the cost of illness was due to indirect costs. In the United States, the ratio of indirect costs to the direct costs of medical treatment is estimated at 2.5–1 (Rice et al., 1989), but deCodes et al. found a ratio of 7–1 in their study. Injuries accounted for 25% of all costs, primarily because of its high cost of indirect morbidity (deCodes et al., 1988). There have been almost no studies to assess the effects of injury on the household level, nor to address household coping strategies for dealing with these economic costs. The purpose of this current study was to perform such an assessment in Ghana. We sought to look at the monetary costs of treatment and of lost wages. We also sought to investigate the broader effects on the involved families and the coping strategies they employed. By so doing, we hoped to provide information that would help with development of policies to assist existing household coping strategies and ameliorate the economic impact of injury or illness on the involved families.

This study identified the primary economic coping strategies used by families of injured persons in Ghana to be intra-family labor reallocation, the use of loans, and the sale of assets. The economic effects of illness in general probably would be fairly similar in the study area. Hence, the study sheds further light on family coping mechanisms in the study area, which are somewhat different from those reported elsewhere in the world (Mills, 1994; Sauerborn et al., 1996a and Sauerborn et al., 1996b). Finally, this study draws attention to injuries as a health problem. Although it does not show the relative cost of different illnesses in comparison to injury, it nonetheless shows that injury has a definite, widespread and potentially severe economic cost to families of injured persons. This study thus adds further evidence to the need to develop strategies for injury control, including both prevention and cost effective treatment, in the context of less developed countries.