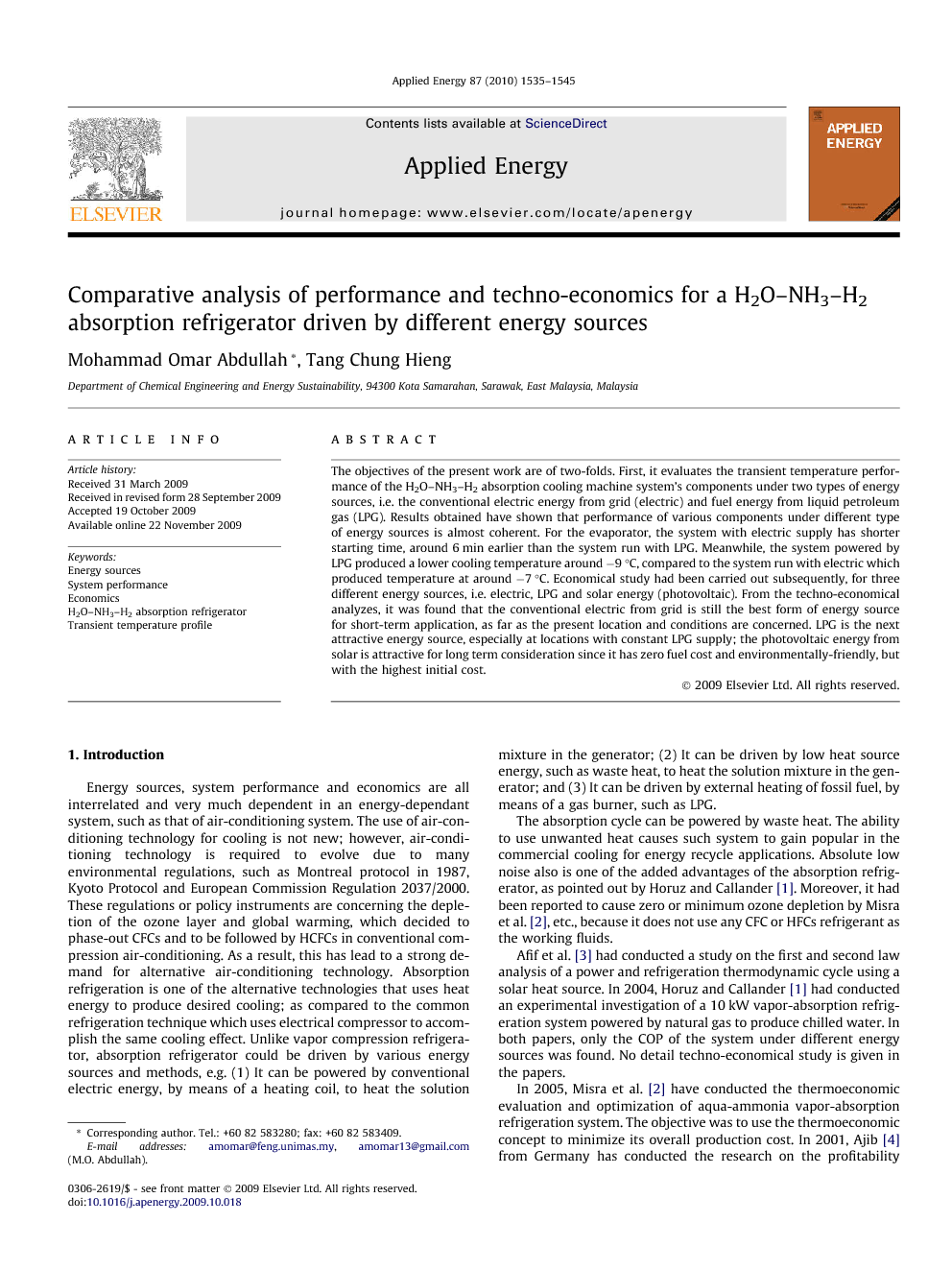 The objectives of the present work are of two-folds. First, it evaluates the transient temperature performance of the H2O–NH3–H2 absorption cooling machine system’s components under two types of energy sources, i.e. the conventional electric energy from grid (electric) and fuel energy from liquid petroleum gas (LPG). Results obtained have shown that performance of various components under different type of energy sources is almost coherent. For the evaporator, the system with electric supply has shorter starting time, around 6 min earlier than the system run with LPG. Meanwhile, the system powered by LPG produced a lower cooling temperature around −9 °C, compared to the system run with electric which produced temperature at around −7 °C. Economical study had been carried out subsequently, for three different energy sources, i.e. electric, LPG and solar energy (photovoltaic). From the techno-economical analyzes, it was found that the conventional electric from grid is still the best form of energy source for short-term application, as far as the present location and conditions are concerned. LPG is the next attractive energy source, especially at locations with constant LPG supply; the photovoltaic energy from solar is attractive for long term consideration since it has zero fuel cost and environmentally-friendly, but with the highest initial cost.

Energy sources, system performance and economics are all interrelated and very much dependent in an energy-dependant system, such as that of air-conditioning system. The use of air-conditioning technology for cooling is not new; however, air-conditioning technology is required to evolve due to many environmental regulations, such as Montreal protocol in 1987, Kyoto Protocol and European Commission Regulation 2037/2000. These regulations or policy instruments are concerning the depletion of the ozone layer and global warming, which decided to phase-out CFCs and to be followed by HCFCs in conventional compression air-conditioning. As a result, this has lead to a strong demand for alternative air-conditioning technology. Absorption refrigeration is one of the alternative technologies that uses heat energy to produce desired cooling; as compared to the common refrigeration technique which uses electrical compressor to accomplish the same cooling effect. Unlike vapor compression refrigerator, absorption refrigerator could be driven by various energy sources and methods, e.g. (1) It can be powered by conventional electric energy, by means of a heating coil, to heat the solution mixture in the generator; (2) It can be driven by low heat source energy, such as waste heat, to heat the solution mixture in the generator; and (3) It can be driven by external heating of fossil fuel, by means of a gas burner, such as LPG. The absorption cycle can be powered by waste heat. The ability to use unwanted heat causes such system to gain popular in the commercial cooling for energy recycle applications. Absolute low noise also is one of the added advantages of the absorption refrigerator, as pointed out by Horuz and Callander [1]. Moreover, it had been reported to cause zero or minimum ozone depletion by Misra et al. [2], etc., because it does not use any CFC or HFCs refrigerant as the working fluids. Afif et al. [3] had conducted a study on the first and second law analysis of a power and refrigeration thermodynamic cycle using a solar heat source. In 2004, Horuz and Callander [1] had conducted an experimental investigation of a 10 kW vapor-absorption refrigeration system powered by natural gas to produce chilled water. In both papers, only the COP of the system under different energy sources was found. No detail techno-economical study is given in the papers. In 2005, Misra et al. [2] have conducted the thermoeconomic evaluation and optimization of aqua-ammonia vapor-absorption refrigeration system. The objective was to use the thermoeconomic concept to minimize its overall production cost. In 2001, Ajib [4] from Germany has conducted the research on the profitability study of using solar energy for refrigeration and air-conditioning application. The objective was to analyze the use of solar thermal energy to operate the absorption refrigeration machines for refrigeration. Both papers had provided analysis on the costing of refrigeration systems but without detail comparison between different energy sources. Recently, Desider et al. [5] had conducted a technical and economical analysis of the solar-powered cooling systems on industrial refrigeration and air-conditioning application. A comparison on the net present value and fuel cost estimation were done between the 100% electrical driving plant with hybrid tri-generation and solar cooling plants. The result showed that the hybrid plant is superior from both technical and economical standpoint. Gebreslassie et al. [6] conducted the design of environmentally conscious absorption cooling systems via multi-objective optimization and life cycle assessment in 2009. They concluded that the reduction of absorption cooling system’s operating cost can reduce the energy consumption which indirectly decrease the environmental impact. Most text books, e.g. Cengal and Boles [7] and available journals, e.g. [8], [9] and [10], deal with either water–ammonia (H2O–NH3) or lithium bromide–water (LiBr–H2O) working pairs for absorption cooling. In the present study, a H2O–NH3–H2 absorption cooling machine is considered. Here, the H2O–NH3–H2 absorption cooling machine, which uses ammonia (NH3) as refrigerant, water as absorbent and hydrogen as equalizer for pressure, had been employed. The transient temperature of the system’s components under two types of energy sources, i.e. electric form grid and LPG were first accessed and compared. Subsequently, the economical analysis was done to investigate the system run under three feasible energy scenarios, viz. electric, LPG and photovoltaic.

From the experiment analysis that had been carried out, the following conclusions can be drawn: The difference between case 1 (electric) and case 2 (LPG) are the starting time and the range of minimum temperature for evaporator; where case 1 has the shorter starting time (6 min earlier) while case 2 has higher range of minimum temperature, around −9 °C. The present experimental work, undertaken to aid in the understanding of absorption cycle, proved fruitful in many ways. The experimental works carried out allow the definition and understanding of transient temperature of different energy schemes and utilization. It is clear that based on the experimental transient temperature results produced by this work could further be used to avoid unnecessary energy wastage due to frequent on–off cycles of the electrical-powered absorption system. Such a detail study is currently under way. The simulation results indicate that the electrical heater system is the best alternative for short term (less than 10 years) application. This is because it has the lowest capital for installation. Then it follows by LPG burner as the second alternative. This later method is especially beneficial at locations where the LPG gas could be easily accessed such as the local Miri oil town, where LPG is process and produce abundantly. The photovoltaic is unsuitable for short-term application due to its excessive relative high capital cost. But for long term (more than 10 years) consideration, the use of photovoltaic as energy source becomes attractive. This is due to the fact that photovoltaic poses zero fuel cost and environmentally friendly. As to the environmental impact, the conventional electricity and photovoltaic are generally consider as clean and safe energies. But, during the electricity generation, it still can contribute to pollution. For photovoltaic, some pollution may cause during the manufacturing process. For LPG, it will emit some CO2, which can cause some green house effect, although LPG is known cleaner than the use of diesel and gasoline. Finally, it is to be noted that, however, cleaner and cheaper energy generators together with their lower maintenance cost are expected in near future due to the extensive research and development around the globe.