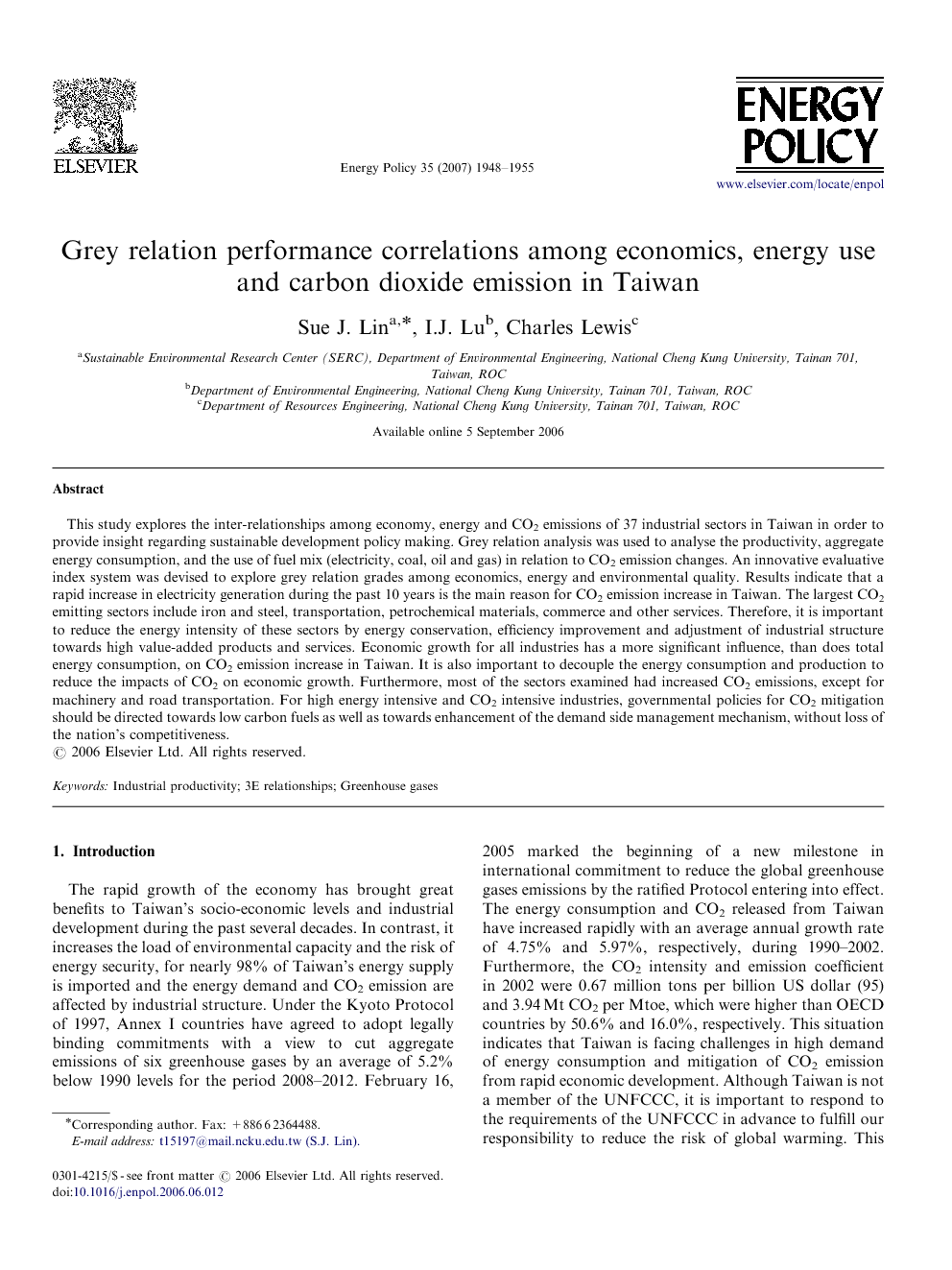 This study explores the inter-relationships among economy, energy and CO2 emissions of 37 industrial sectors in Taiwan in order to provide insight regarding sustainable development policy making. Grey relation analysis was used to analyse the productivity, aggregate energy consumption, and the use of fuel mix (electricity, coal, oil and gas) in relation to CO2 emission changes. An innovative evaluative index system was devised to explore grey relation grades among economics, energy and environmental quality. Results indicate that a rapid increase in electricity generation during the past 10 years is the main reason for CO2 emission increase in Taiwan. The largest CO2 emitting sectors include iron and steel, transportation, petrochemical materials, commerce and other services. Therefore, it is important to reduce the energy intensity of these sectors by energy conservation, efficiency improvement and adjustment of industrial structure towards high value-added products and services. Economic growth for all industries has a more significant influence, than does total energy consumption, on CO2 emission increase in Taiwan. It is also important to decouple the energy consumption and production to reduce the impacts of CO2 on economic growth. Furthermore, most of the sectors examined had increased CO2 emissions, except for machinery and road transportation. For high energy intensive and CO2 intensive industries, governmental policies for CO2 mitigation should be directed towards low carbon fuels as well as towards enhancement of the demand side management mechanism, without loss of the nation's competitiveness

The rapid growth of the economy has brought great benefits to Taiwan's socio-economic levels and industrial development during the past several decades. In contrast, it increases the load of environmental capacity and the risk of energy security, for nearly 98% of Taiwan's energy supply is imported and the energy demand and CO2 emission are affected by industrial structure. Under the Kyoto Protocol of 1997, Annex I countries have agreed to adopt legally binding commitments with a view to cut aggregate emissions of six greenhouse gases by an average of 5.2% below 1990 levels for the period 2008–2012. February 16, 2005 marked the beginning of a new milestone in international commitment to reduce the global greenhouse gases emissions by the ratified Protocol entering into effect. The energy consumption and CO2 released from Taiwan have increased rapidly with an average annual growth rate of 4.75% and 5.97%, respectively, during 1990–2002. Furthermore, the CO2 intensity and emission coefficient in 2002 were 0.67 million tons per billion US dollar (95) and 3.94 Mt CO2 per Mtoe, which were higher than OECD countries by 50.6% and 16.0%, respectively. This situation indicates that Taiwan is facing challenges in high demand of energy consumption and mitigation of CO2 emission from rapid economic development. Although Taiwan is not a member of the UNFCCC, it is important to respond to the requirements of the UNFCCC in advance to fulfill our responsibility to reduce the risk of global warming. This study aims to investigate the correlations and performances of the industrial energy consumption, productivity and CO2 emissions by grey relation analysis (GRA) to have an integrated understanding of dynamic networks among the energy, economic and environmental (3E) system so as to help the government of Taiwan set up strategies for industrial CO2 reduction. Grey system theory was formulated by Ju-long Deng in 1982. According to this theory, a system whose internal information—such as architecture, operation mechanism, system characteristics and parameters—are completely known is called a white system. On the contrary, a system is defined as a black system if one cannot obtain any information and characteristics about the system. Grey space is thus defined as a system defined between the white and black systems. That is, the information and messages of the grey system are partially clear, but some are not. Compared with traditional regression statistical methods, which require more data and time, the grey system needs minimal data to get reasonable and good results. Although fuzzy set theory can be used to simulate a complex and unclear system by constructing membership functions, this is somewhat subjective and time-consuming in operation (Enea and Salemi, 2001; Fisher, 2003). Therefore, in this study we adopt grey theory to analyse the inter-relationships among economy, energy and CO2 emissions of 37 industrial sectors in Taiwan. In addition, the grey system has been applied in many fields, such as economics, agriculture, geography, weather, earthquakes, science, etc. For example, the dynamic grey model was applied by Morita et al. (1996) to examine the annual load demand of the power system in Japan, and they concluded that the grey system for the long-term load forecasting problem had a higher accuracy than the linear single regression model. Chang and Lin (1999) identified the key factors affecting CO2 emissions from 34 industries in Taiwan by GRA to better understand the inter-relationships regarding industrial environmental, economic and energy performances. Liang (1999) used GRA to capture the preliminary schedules for the short-term hydroelectric generation scheduling of a power system and found that hydro schedules generated by the GRA approach were close to the optimal demands by the differential dynamic programming method. Hu and Yang (2000) described the attenuation pattern of solar radiation intensity on sunny days by combining a definitive physical model with grey parameters. Deng (2001) proposed detailed information about the definition of synthesizing kenning mode and the theorem of grey hazy set including embryo, growing, nature and evidence subsets. Tseng et al. (2001) proposed a hybrid method that combined a grey forecasting model with the ratio-to-moving-average deseasonalization method to predicate a time series with seasonality characteristics. Chiao and Wang (2002) analysed the main components affecting the efficiency and the failure time of fluorescent lamps by a grey forecasting model and found that their prediction provided a practical way to improve the life time of fluorescent lamps which are already highly reliable. Furthermore, grey and fuzzy theory were combined by Wang (2002) to analyse stock data and to predict the stock price promptly at any given time. Li (2003) used a different forecasting model including traditional prediction, Markov-chain and Fourier residual modification to examine the accuracy of the grey forecasting model and found that the Markov-chain approach had the best result in making the prediction of the global IC industry. Wu and Chang (2003) adopted a genetic-algorithm-based grey mathematical method to assess the impacts of recent pollution charges and water resources fees on a textile-dyeing factory. They indicated that grey input-output analysis is a practical tool for enterprises to evaluate their environmental cost allocation, production planning and management. In addition, grey relative analysis was applied to explore the relationships among the four major factors that affected the crop residues and firewood consumption in rural household of each province/region in China during 1991–1999 by Mu et al. (2004). The combined GMC (1,n) model with the grey relational analysis was produced by Wu and Chen (2005) to predict Taiwan's Internet access population. The results showed that the introduction of convolution technology into the GM (1,n) model had high accuracy for prediction. Mao and Chirwa (2006) examined motor vehicle fatality in USA and UK by grey prediction theory and found that GM (1,1) model plus 3-point average technique had high feasibility, efficiency and accuracy. The purpose of this paper is to explore the characteristics and interrelationships of industrial productivity, energy consumption and CO2 emission of 37 industries in Taiwan by GRA to provide decision makers with an integrated index system for analyzing the development patterns and linkage effects among industry, energy and environmental quality. Data from some of the 37 sectors were insufficient for conventional statistical analysis; therefore, GRA was adopted as the approach.