عنوان انگلیسی
Why is there no momentum in the Taiwan stock market?
دانلود فوری مقاله + سفارش ترجمه 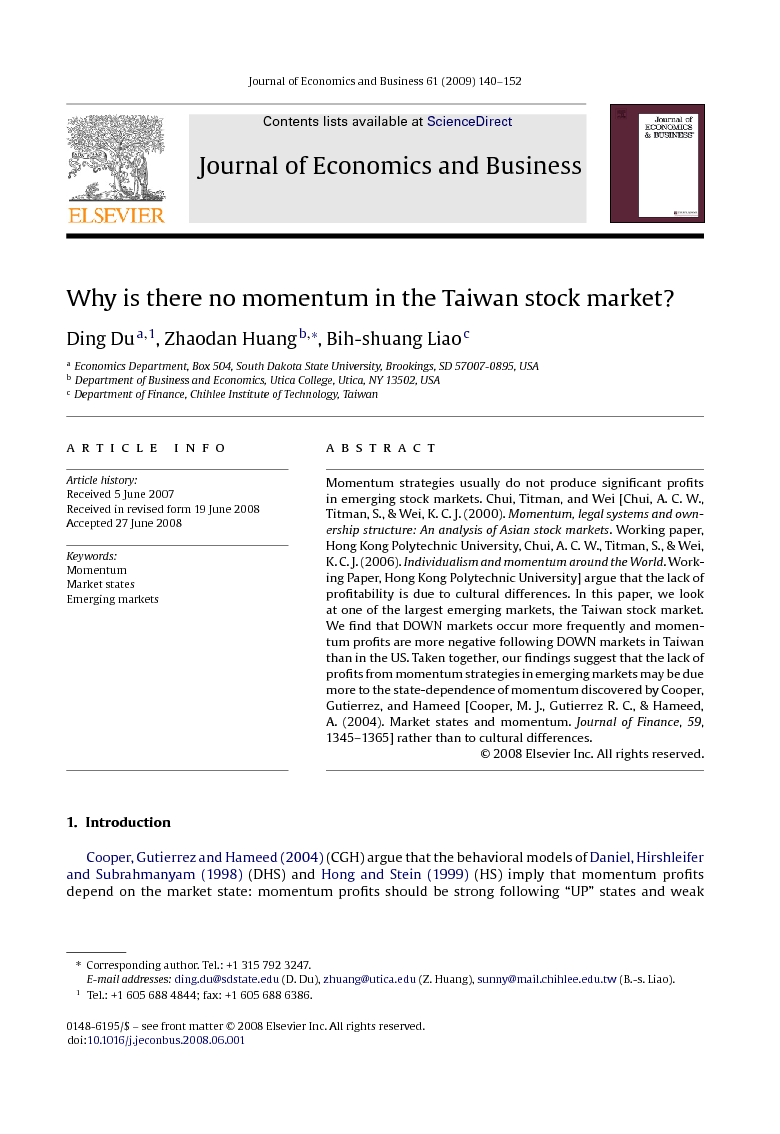 Momentum strategies usually do not produce significant profits in emerging stock markets. Chui, Titman, and Wei [Chui, A. C. W., Titman, S., & Wei, K. C. J. (2000). Momentum, legal systems and ownership structure: An analysis of Asian stock markets. Working paper, Hong Kong Polytechnic University, Chui, A. C. W., Titman, S., & Wei, K. C. J. (2006). Individualism and momentum around the World. Working Paper, Hong Kong Polytechnic University] argue that the lack of profitability is due to cultural differences. In this paper, we look at one of the largest emerging markets, the Taiwan stock market. We find that DOWN markets occur more frequently and momentum profits are more negative following DOWN markets in Taiwan than in the US. Taken together, our findings suggest that the lack of profits from momentum strategies in emerging markets may be due more to the state-dependence of momentum discovered by Cooper, Gutierrez, and Hameed [Cooper, M. J., Gutierrez R. C., & Hameed, A. (2004). Market states and momentum. Journal of Finance, 59, 1345–1365] rather than to cultural differences.

Momentum is usually weak in emerging markets but strong in developed markets. Chui et al., 2000 and Chui et al., 2006 argue that this profitability difference is due to cultural differences. We show in this paper that the lack of profitability of momentum strategies in emerging markets (such as the Taiwan market) is due more to the state-dependence of momentum discovered by CGH rather than to cultural differences. This conclusion is based on two key findings. First, the mean momentum profit following UP markets in Taiwan is strongly positive. This finding does not support the idea that the investors in the Taiwan market are less overconfident or exhibit less cognitive bias, as Chui et al., 2000 and Chui et al., 2006 suggest. Second, the mean momentum profit following DOWN markets in Taiwan is strongly negative, and there are many DOWN states in Taiwan. Taken together, these explain why standard momentum strategies are not profitable in the Taiwan stock market. Our results have important investment implications. Investors in both developed markets and emerging markets could improve their investment performance by using a conditional, not an unconditional, momentum strategy. That is, investors should follow a momentum strategy when the prior market state is UP, and a contrarian strategy when the prior market state is DOWN. This is more true to emerging markets due to the frequency and severity of DOWN markets in emerging markets.