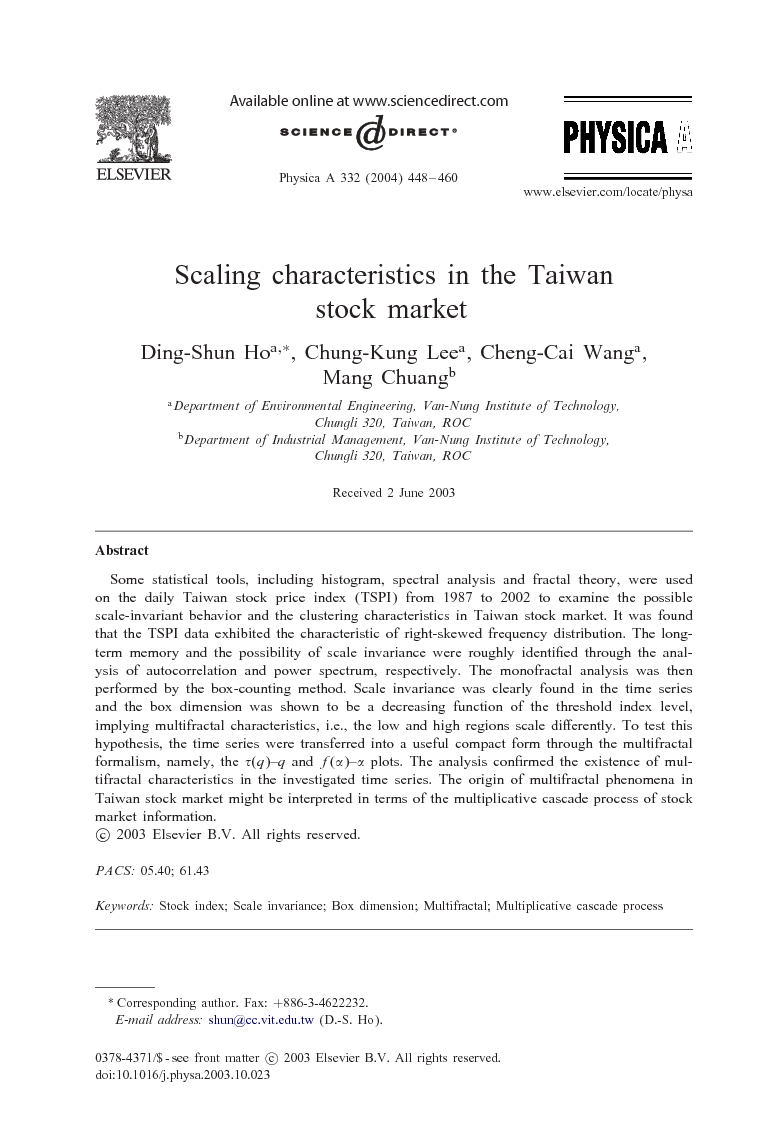 Some statistical tools, including histogram, spectral analysis and fractal theory, were used on the daily Taiwan stock price index (TSPI) from 1987 to 2002 to examine the possible scale-invariant behavior and the clustering characteristics in Taiwan stock market. It was found that the TSPI data exhibited the characteristic of right-skewed frequency distribution. The long-term memory and the possibility of scale invariance were roughly identified through the analysis of autocorrelation and power spectrum, respectively. The monofractal analysis was then performed by the box-counting method. Scale invariance was clearly found in the time series and the box dimension was shown to be a decreasing function of the threshold index level, implying multifractal characteristics, i.e., the low and high regions scale differently. To test this hypothesis, the time series were transferred into a useful compact form through the multifractal formalism, namely, the τ(q)–q and f(α)–α plots. The analysis confirmed the existence of multifractal characteristics in the investigated time series. The origin of multifractal phenomena in Taiwan stock market might be interpreted in terms of the multiplicative cascade process of stock market information.

The financial time series is characterized by many large fluctuations with no obvious autocorrelation. The complexity of such time series has made its interpretation very difficult. There are two types of approaches to extract economic information from the collected time series data. The bottom-up approach is to build a model based on the current knowledge of the fundamental dynamics of financial markets, and to make predictions accordingly. The top-down approach starts with the statistical analysis of the collected time series data and finds correlations to the other interacting factors. Whichever the approach employed, however, the reliability of the result is strongly affected by our fundamental knowledge on the complex structure of financial time series. As a time series, the financial data are usually characterized by a probability distribution that cannot be fitted using a Gaussian distribution and possesses a power-law behavior being similar to a phase transition phenomenon [1] and [2]. Some prominent approaches, including the Lévy stable distribution [3], leptokurtic distribution using mixtures of distribution [4], and ARCH/GARCH models [5] and [6], have been used to interpret the non-Gaussian behavior. However, these models cannot address the scaling behavior of the probability distributions in financial time series. This new property (scale characteristics) has been the focus of intense research for many scientists in the last years and the word “Econophysics” is sometimes used to refer to these works [7] and [8]. It was found that many financial time series indeed exhibited interesting scaling properties [9], [10], [11], [12] and [13]. Moreover, the idea of multiplicative cascade, which is at the heart of the arguments in favor of multiscaling in turbulence, is frequently adopted to interpret the generating process of scaling characteristics in financial market although it is not easily applicable to price time series [1], [2], [14] and [15]. On the other hand, the modeling of the microscopic dynamics of economic systems based on the idea of scaling has also been studied [16], [17], [18] and [19]. These approaches have provided some new insights into the behavior of complex financial markets and have given a better understanding of the underlying stochastic dynamics. In addition, if financial data is shown to be scale invariant in time domain, i.e., scale shifts are theoretically possible, it may also have significant usage in data analysis [20] and [21]. It is important, therefore, to confirm whether financial data are scale invariant in time domain, and identify the physics behind this property. In this article, both the long-term memory and the possibility of scale invariance in Taiwan stock price index (TSPI) were firstly identified through the analysis of autocorrelation and power spectrum, respectively. Then, the clustering structure of the time series and its multiscaling characteristics will be analyzed by box-counting as well as multifractal scaling analysis.

The clustering properties of TSPI were investigated by means of some statistical methods. The time series possess a right-skewed frequency distribution that is well represented by the lognormal model. On the other hand, the autocorrelation does not decay to zero exponentially but in a slower manner and the power spectrum exhibits a classical f−5/3 power-law shape over a range of frequencies. Both box-counting and multifractal analysis indicate that the stock price time series can be viewed as multifractal measures that may be the result of a random multiplicative process of market information.