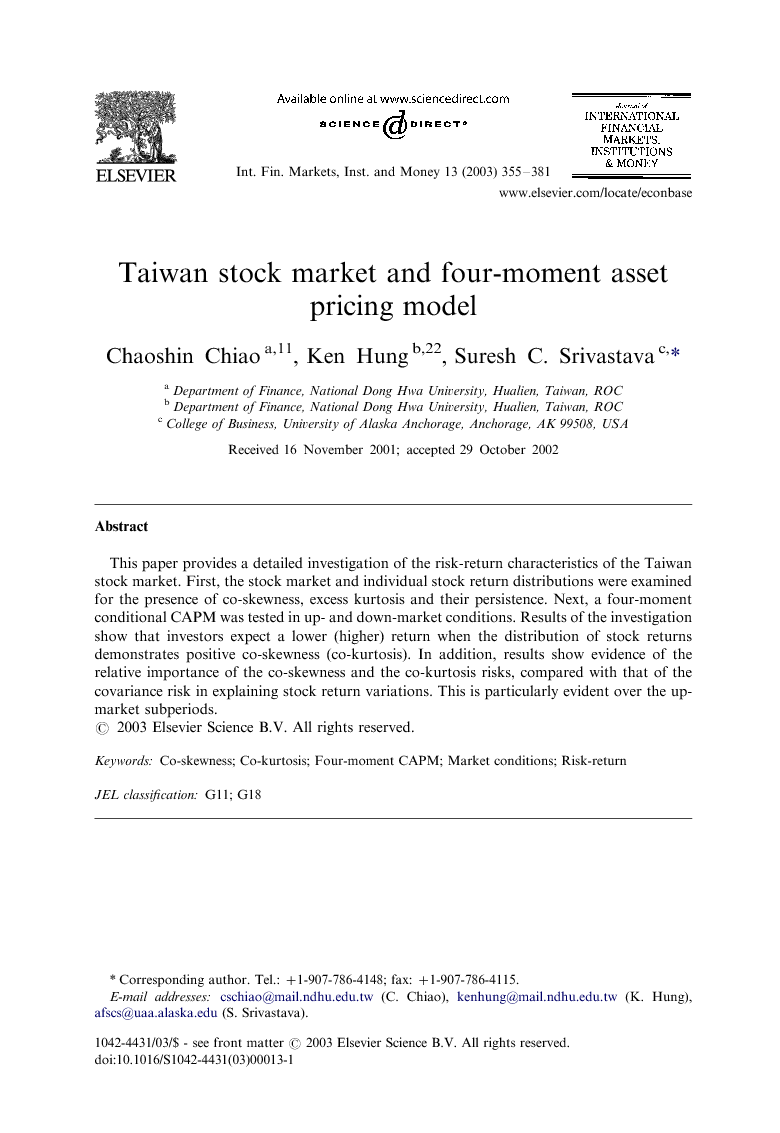 This paper provides a detailed investigation of the risk-return characteristics of the Taiwan stock market. First, the stock market and individual stock return distributions were examined for the presence of co-skewness, excess kurtosis and their persistence. Next, a four-moment conditional CAPM was tested in up- and down-market conditions. Results of the investigation show that investors expect a lower (higher) return when the distribution of stock returns demonstrates positive co-skewness (co-kurtosis). In addition, results show evidence of the relative importance of the co-skewness and the co-kurtosis risks, compared with that of the covariance risk in explaining stock return variations. This is particularly evident over the up-market subperiods.

Traditional mean-variance based CAPM is one of the few theoretical models that has substantial influence on practical finance. It is extensively applied as a benchmark for performance evaluation and measurement of abnormal returns. Large volumes of research exist on the test of the risk-return relationship based on the Sharpe–Lintner (standard) version of (two-moment) CAPM. The noteworthy implication of this model is that investors are only compensated for bearing the systematic covariance risk. The product of beta and risk premium determines the amount of compensation. Lately, many economists have cast doubt on the explanatory power of the market portfolio or beta in determining stock returns. Most notably, Fama and French (1992) found that other variables, such as firm size and book-to-market ratio, capture cross-sectional variations in common stock returns better than the beta. A number of authors have investigated the inadequacy of the mean-variance approach and have added the third moment of the return distribution to account for investors’ preference for positive skewness. Jean, 1971, Jean, 1973, Arditti, 1971 and Arditti and Levy, 1975 investigated the relationship between skewness and return of individual securities and portfolios. Francis (1975) showed that total skewness is not priced. However, Kraus and Litzenberger (1976) argued that systematic skewness (co-skewness) and not the total skewness is relevant for the market model. Additional three-moment CAPM research by Simkowitz and Beedles, 1978, Friend and Westerfield, 1980, Barone-Adesi, 1985, Sears and Wei, 1985, Tan, 1991, Lim, 1989, Chunhachinda et al., 1997, Peiro, 1999, Harvey and Siddique, 1999 and Harvey and Siddique, 2000 explored the importance of skewness in asset pricing. Sears and Wei (1988) emphasized that ignoring the co-skewness risk may bias the estimates in tests for the risk-return trade-off. Mandelbrot, 1963 and Fama, 1963 conjectured that the stock returns may have fat tails. Recently, Fang and Lai (1997) found that investors are compensated for bearing the systematic co-kurtosis risk, as well as the systematic covariance and co-skewness risks with higher expected returns. However, this remains a matter of debate: “Should co-skewness and co-kurtosis risk measures (third and fourth moments of return distribution) be added to supplement to the covariance risk”? A persuasive argument can be made that an asset-pricing model for emerging market returns must include the co-skewness and co-kurtosis risk. While much research has investigated the investor preferences for positive skewness and kurtosis in developed equity markets, only a few have studied the issue in emerging markets3. The plausible reasons for the lack of studies may be due to the characteristics of emerging markets or relative newness. Hartmann and Khambata (1993) found emerging markets to have low market capitalization, a smaller number of listed stocks, low trading volume and turnover, market domination by a few large stocks, and high volatility. Korajczyk, 1996 and Bakaert and Harvey, 1997 showed that liberalization of emerging markets have helped infuse foreign capital into emerging markets and, hence, reduce volatility. Chunhachinda et al. (1997) demonstrated the importance of skewness in the valuation of risky emerging market assets. Eftekhari and Satchell (1999) examined return nonnormalities and investors’ exposure to risk in emerging markets. Hwang and Satchell (1999) incorporated higher moments to model risk premia for emerging markets. Mitra and Low (1998) compared and contrasted the skewness and kurtosis of emerging and developed market indices. However, many of these studies of emerging markets have focused on market indices rather than individual stocks. This paper investigates the risk-return characteristics of one fast growing market in Asia, the Taiwan stock market4. The study analyzes Taiwan stock market returns as well as individual stock returns. First, distributional properties of market returns are examined, using monthly return data from January 1974 through December 1998. The presence of co-skewness and excess kurtosis, and their persistence confirmed that Taiwan stock market return distribution is asymmetric, and skewness and (excess) kurtosis in returns have persisted through time. These two observations provide an adequate rationale for introducing third and fourth moment risk measures in asset pricing models. Second, traditional two-, three- and four-moment CAPMs are used to investigate the risk-return relationship of individual stocks. These models are referred to in this paper as “unconditional CAPM”. Following Pettengill et al. (1995), the unconditional four-moment CAPM was extended to a model conditional upon up- and down-market conditions, and the risk-return relationship of individual stock returns were reexamined. The full data series were separated into up- and down-market subperiods in order to address investors’ greater concern for the downside risk and to differentiate between ex-ante expectations and ex-post realizations. This issue will be discussed in the next section. Finally, the paper estimates the elasticity of the estimated coefficients of the conditional four-moment CAPM. The rest of this paper's organization is as follows. In Section 2, the two key theoretical issues: the up-market and down-market conditions and the higher-moment CAPM are discussed. In Section 3, the sources of the Taiwan stock market data are introduced. In Section 4, the distributional properties of the market portfolio and individual stock returns such as asymmetry, skewness, kurtosis, and their over-time persistence are examined. In Section 5, several unconditional and a conditional four-moment return generating models are tested. Then results of unconditional and conditional CAPMs are compared, their differences analyzed and implications discussed. Finally, the paper is summarized in Section 5.