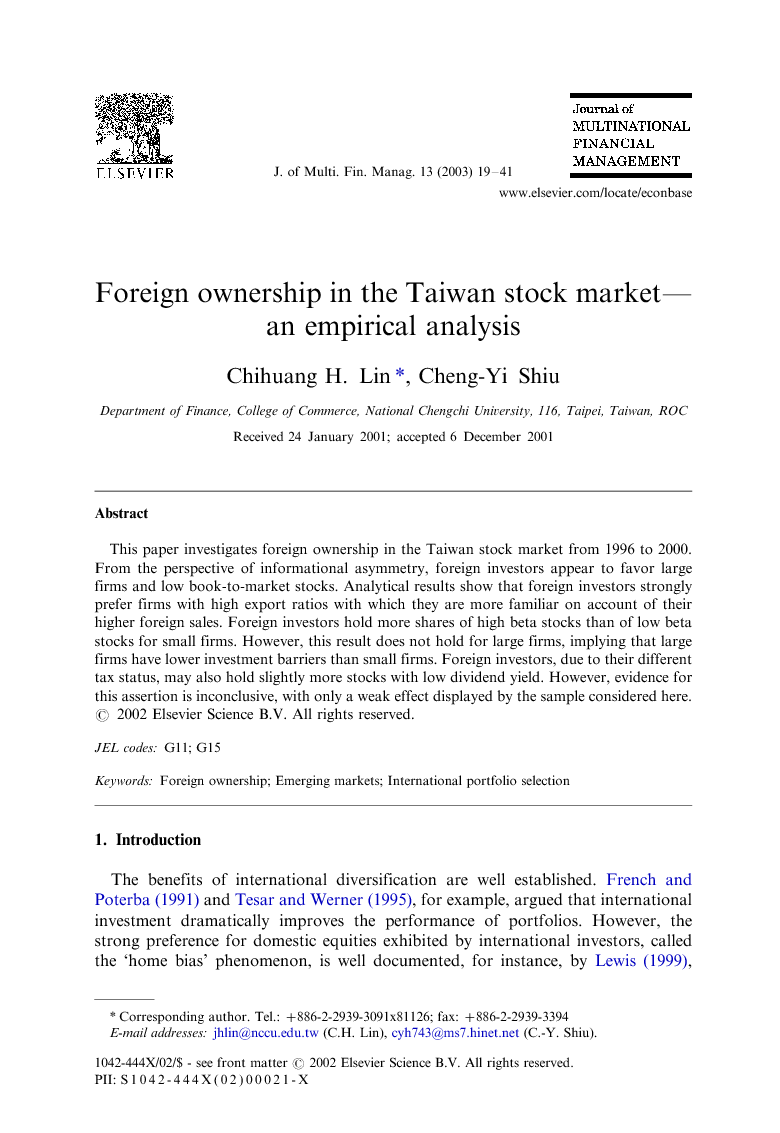 This paper investigates foreign ownership in the Taiwan stock market from 1996 to 2000. From the perspective of informational asymmetry, foreign investors appear to favor large firms and low book-to-market stocks. Analytical results show that foreign investors strongly prefer firms with high export ratios with which they are more familiar on account of their higher foreign sales. Foreign investors hold more shares of high beta stocks than of low beta stocks for small firms. However, this result does not hold for large firms, implying that large firms have lower investment barriers than small firms. Foreign investors, due to their different tax status, may also hold slightly more stocks with low dividend yield. However, evidence for this assertion is inconclusive, with only a weak effect displayed by the sample considered here.

The benefits of international diversification are well established. French and Poterba (1991) and Tesar and Werner (1995), for example, argued that international investment dramatically improves the performance of portfolios. However, the strong preference for domestic equities exhibited by international investors, called the ‘home bias’ phenomenon, is well documented, for instance, by Lewis (1999), French and Poterba (1991) and Tesar and Werner (1995) who studied international diversification gains and the home bias phenomenon. Recently, Kang and Stulz (1997) and Dahlquist and Robertsson (2001) examined foreign ownership in Japanese and Swedish stock markets, respectively. Kang and Stulz (1997) found that foreign investors in Japan prefer large, low leveraged firms, and firms with high export ratios. Dahlquist and Robertsson (2001) found that foreigners prefer large firms, and those with high liquidity. Their results show that foreign investors favor firms with certain characteristics, such as large size and low debt ratio. That is, global investors do not hold a global portfolio, a domestic portfolio and a bond portfolio, as predicted by the International Capital Assets Pricing Model (Solnik, 1974). Global investors actually consider specific advantages when selecting their foreign assets. The disproportional holding of stocks is not only evident in international investment, but also applied to domestic portfolio selection. Falkenstein (1996) demonstrated that U.S. mutual funds hold more shares in large domestic firms than in small firms. Coval and Moskowitz (1999) examined U.S. investors’ holdings in domestic portfolios and found investment managers strongly preferred stocks close to home. Dahlquist and Robertsson (2001) also compared the ownership of Swedish stocks by foreign investors with that by domestic institutional investors, revealing that foreign and institutional investors can be characterized by similar attributes. The academic literature attributes these findings to investment barriers and asymmetric information among investors. Stulz (1981) focused on barriers to international investment, such as governmental restrictions on foreign and domestic capital flow, foreign tax and higher transaction costs. These barriers caused local investors not to hold foreign assets until the return on foreign assets is sufficiently high to compensate for the barrier cost. Merton (1987) proposed the ‘investor base’ hypothesis, arguing that investors only receive information from firms familiar to them. Coval and Moskowitz (1999) found evidence of preference among US investment managers for geographically close investments. These studies suggest that asymmetric information and investment barriers, although not fully explaining the phenomenon, are important factors in explaining portfolio selection bias. Furthermore, tax considerations are also important in allocating assets and selecting portfolios.1 The difference between the taxation of foreign and domestic investors influences foreign ownership. Liljeblom et al. (2001) showed the positive relation between falls in the ex-dividend day price and the degree of foreign ownership, indicating that foreign investors disfavor stocks with high dividends. These empirical results suggest that foreign investors hold fewer shares with high dividend yields to mitigate the negative impact of disharmonious taxation. This paper examines foreign ownership in Taiwan's stock market, to more deeply elucidate international portfolio selection. The ratio of merchandise exports to GDP was 34.4% for Taiwan in 1998, higher than 7.9% for the US and 10.1% for Japan.2 One reason for the importance of the foreign sector in Taiwan economy is that many Taiwanese firms manufacture brand-name products that were originally designed and owned by US firms. For example, Acer is an important producer of the IBM notebook, and Pou Chen Corporation makes shoes for NIKE. Foreign investors in Taiwan's stock market, most of them are from the US, suffer more severe informational asymmetry than local investors. However, foreign investors have great access to the foreign product markets and the foreign customers of Taiwanese firms, than do local investors. In international trading and outsourcing, the difference between the information of local investors and that of foreigners is smaller for high export firms in Taiwan than for low exports firms. This difference nevertheless powerfully rationalizes foreign investors’ holding of more shares in these high export ratio firms, despite that fact these firms’ returns may correlate more closely with those of US stocks than do low-export ratio firms and thus represent less diversification. In Taiwan, domestic and foreign investors are taxed differently. Capital gains are tax-free in Taiwan. Dividends distributed from earnings are taxed as ordinary income for local investors, while foreign investors must pay a 25% withholding tax. We predict that foreign investors should favor equities with lower dividend yields since institutional investors can not enjoy tax refunds or credits in their host country. Taiwan's stock market thus offers a good opportunity to test the dividend clientele hypothesis. This study proposes several hypotheses concerning factors that affect foreign holdings on the Taiwan market. The sample includes foreign ownership of companies listed on the Taiwan Stock Exchange (TSEC) from 1996 to 2000. Foreign investors are found to favor large firms with high export ratios, and low book-to-market equity. Foreign ownership in small firms is higher for high beta portfolios than for low beta portfolios. These results are consistent with the asymmetric information hypothesis and the investment barrier model. The findings on the tax clientele effect are weak and inconclusive. The rest of this paper is organized as follows. Section 2 proposes some testable hypotheses. Section 3 then introduces the sample market, namely the TSEC. Section 4 describes data and methodology, and Section 5 reports empirical results. Section 6 concludes.

Foreign investors are essential in emerging markets, and their levels of ownership, although not high, are increasing. This study investigates foreign ownership in Taiwan, from 1996 to 2000 and identifies the factors that affect foreign ownership in emerging markets. Foreign investors strongly prefer shares of large firms, and low book-to-market stocks, due to the effects of informational asymmetry. Furthermore, foreign investors are shown to favor to investment in firms with high export ratios, a finding that is consistent with that of Kang and Stulz (1997). We assert that foreign investors know about firms with high export ratios, and thus hold more shares in these firms. Our evidence supports the informational asymmetry hypothesis. Furthermore, this investigation finds that, in their holdings of small firms, foreign investors hold more shares of high beta stocks, but no similar evidence exists for their holdings of large firms. Foreign investors have higher investment barriers to investment in small firms than in large firms. The results support the Stulz (1981) investment barrier model. Finally, foreign investors, because of their tax status, tend to hold shares of stocks with low dividend yields. However, the evidence for this claim is mixed and weak.