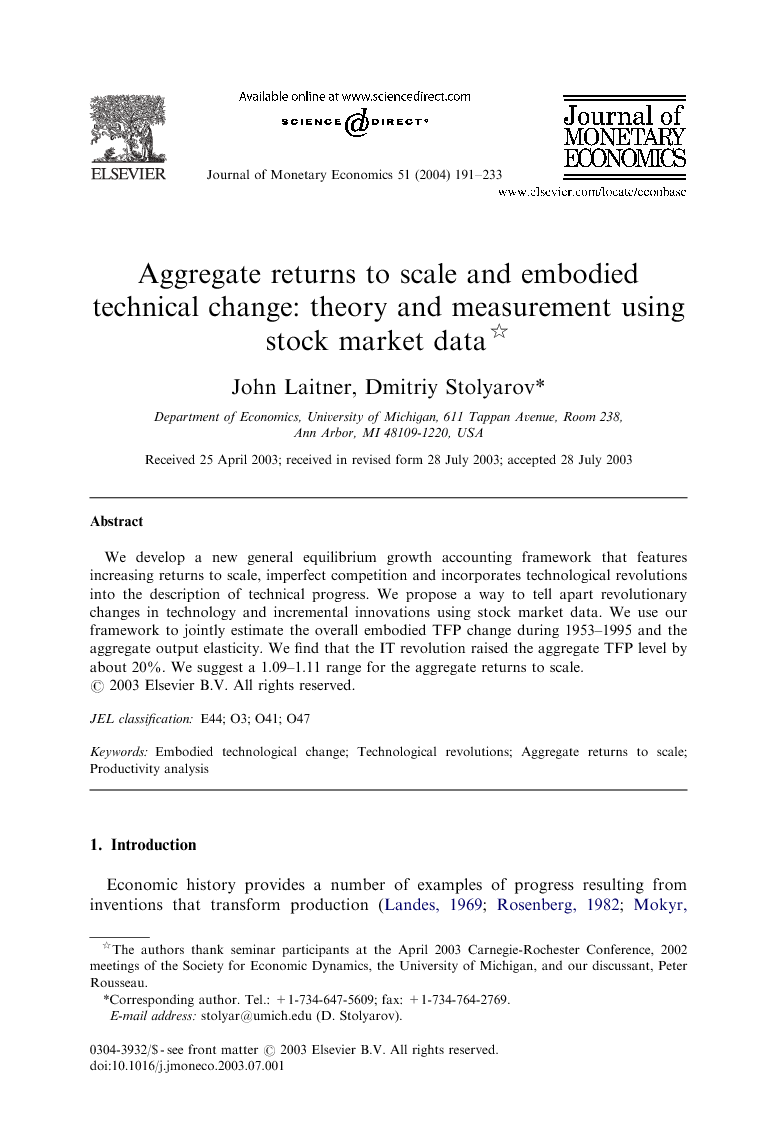 We develop a new general equilibrium growth accounting framework that features increasing returns to scale, imperfect competition and incorporates technological revolutions into the description of technical progress. We propose a way to tell apart revolutionary changes in technology and incremental innovations using stock market data. We use our framework to jointly estimate the overall embodied TFP change during 1953–1995 and the aggregate output elasticity. We find that the IT revolution raised the aggregate TFP level by about 20%. We suggest a 1.09–1.11 range for the aggregate returns to scale.

Economic history provides a number of examples of progress resulting from inventions that transform production (Landes, 1969; Rosenberg, 1982; Mokyr, 1990). Many commentators characterize the recent information technology revolution as such a transforming change. This paper develops a new general equilibrium growth accounting framework with embodied technical progress that can incorporate technological revolutions as well as continuous change and also features increasing returns to scale and imperfect competition. Using data on stock market values, financial rates of return, input and output quantities, and investment good prices, we attempt to estimate the degree of aggregate returns to scale in the U.S. economy and the relative importance of incremental progress and technological revolutions in the last 50 years. Following Solow (1960) and more recent work of Hulten (1992), Greenwood et al. (1997), Greenwood and Jovanovic (2001), and others, this paper assumes that new capital goods embody technological change. Although invention comes for free, the economy must invest in new physical capital and applied knowledge in order for a new technology to enhance production. Given the process for the basic technology, our general equilibrium framework determines time paths of prices and quantities. Despite the complexity of our model, the aggregate properties and, surprisingly, the simple equation of motion of Solow (1960) carry over. This makes it straightforward to use our model as a general equilibrium growth accounting framework. The model has three elements distinct from Solow's (1960) analysis: (1) we incorporate drastic technological innovations into the description of technological change; (2) we generalize the notion of capital to include intangible stocks of applied knowledge as well as physical plant and equipment; and, (3) we allow the possibility of increasing returns to scale. The first new element makes our framework potentially consistent with the popular idea that the U.S. economy underwent a profound change due to the IT revolution, and it relates transforming changes to low frequency stock market cycles. The second element allows our model to match recent large discrepancies between the market value of businesses and the production cost of their physical capital (see, for example, Hall, 2001; Laitner and Stolyarov, 2003). The third element enables us to derive new estimates of aggregate returns to scale and to identify separately the contribution of input accumulation to growth. Our work links to three different literatures on productivity analysis, technological change, and growth. First, this paper is related to the productivity analysis literature based on general equilibrium models of embodiment, such as Greenwood et al. (1997), Gort et al. (1999), and Greenwood and Jovanovic (2001). From a theoretical perspective, our model differs from existing models of embodiment in the three ways mentioned above. Also, we use a calibration procedure that matches the time paths of macroeconomic variables rather than just the variables’ long-run average values. Lastly, we bring stock market and financial rate of return data into the analysis. Second, our model relates to the literature on general purpose technologies (GPT), particularly Helpman and Trajtenberg (1998) and Howitt (1998). The GPT literature explicitly models the invention process that generates endogenous growth. We instead take the process for basic technology to be exogenous, and focus on setting up the production sector in a way that is suitable for bringing our model to data. Third, our work relates to the empirical productivity analysis literature, particularly to the work following Hall (1990), which re-estimates the Solow residual without imposing constant returns to scale and perfect competition. Hall (1990) finds a surprisingly high degree of increasing returns to scale, and he raises the issue of how difficult it is to identify separately returns to scale and TFP growth. Much of the subsequent literature (e.g., Caballero and Lyons (1992) and Basu and Fernald 1995 and Basu and Fernald 1997 to name just a few examples) focuses on overcoming the problem and providing unbiased estimates of aggregate returns to scale. To this day, there is no broad agreement in this literature on the degree of aggregate returns to scale. Our first contribution to this literature is to provide a new approach that relies on general equilibrium, rather than firm-level, theory. Our second contribution is that we measure technological progress both from the relationship of input and output quantities and through changes in stock market valuations and the price of investment goods per “efficiency unit.” Our theoretical steps yield a system of dynamic equations for the economy's aggregate variables. We use the system to estimate the model's parameters with post-WWII U.S. data. We find the data is consistent with a dramatic TFP increase from a technological revolution occurring around 1972–1974, and it is inconsistent with smooth TFP growth alone over the entire period. We estimate that the IT revolution has raised the aggregate TFP level by 15–20 percent, and that it accounts for about 40 percent of overall productivity growth during 1953–1995. Our analysis warns that measuring neutral technological change as the difference between productivity advance and the rate of embodied technological change may overstate its contribution to growth: if technological change is punctuated, the capital stock will grow faster than output after revolutions, so capital deepening can masquerade as neutral technological change. For the same reason, productivity decompositions based on balanced growth approximations may be inaccurate, especially when the sample period is not much longer than the interval between technological revolutions. We use our model to estimate the aggregate degree of increasing returns to scale and to disentangle growth due to productivity improvement from growth due to input accumulation. Our preferred point estimates of the aggregate output elasticity range from 1.09 to 1.11 and have 95% confidence intervals which lie above 1 and below 1.20. The paper proceeds as follows. Section 2.1 introduces the model and characterizes the steady state equilibrium given the level of basic technology. Section 2.2 allows the basic technology to progress stochastically in discrete upward steps. For each technology level, the model has a unique steady-state equilibrium, and the economy converges toward the steady state between changes in technology. Section 2.3 considers continuous, or combined continuous and discrete, technological progress. Section 3 establishes the correspondence between the model's variables and quantities in the data, describes our estimation strategy and presents our parameter estimates. Section 4 discusses estimation results, and Section 5 concludes.

We develop a new way to decentralize an economy with aggregate increasing returns to scale. Although the treatment of constant returns and increasing returns economies in the growth literature has been somewhat separate, our approach treats both within a unified framework. The classic Solow (1960) model is a special case of ours. More importantly, we show that the aggregation properties that made Solow's model suitable for growth accounting carry over to our setting with increasing returns to scale and discontinuous embodied technological change. Increasing returns require imperfect competition, and our model has two implications about industrial organization: our equilibrium requires a constant markup of price over marginal cost, and the equilibrium implies a constant number of oligopolists per industry over time. As a depiction of the U.S. economy, a model with oligopoly and a constant concentration arguably has more appeal than one based on monopolistic competition or pure monopoly.13 We use our model to provide a new methodology for disentangling TFP growth and returns to scale. Whether technological change is continuous or punctuated, we can use two types of data at the same time: our model characterizes technological progress and returns to scale in terms of the relation of quantities of inputs and outputs and in terms of changes in the price of old capital or new investment goods per efficiency unit. When technological progress is discontinuous, our model provides additional predictions about non-steady state behavior. We believe that we can estimate returns to scale more precisely than existing approaches based on production function regressions alone. The estimates we favor set the aggregate output elasticity for the U.S. at about 1.1.