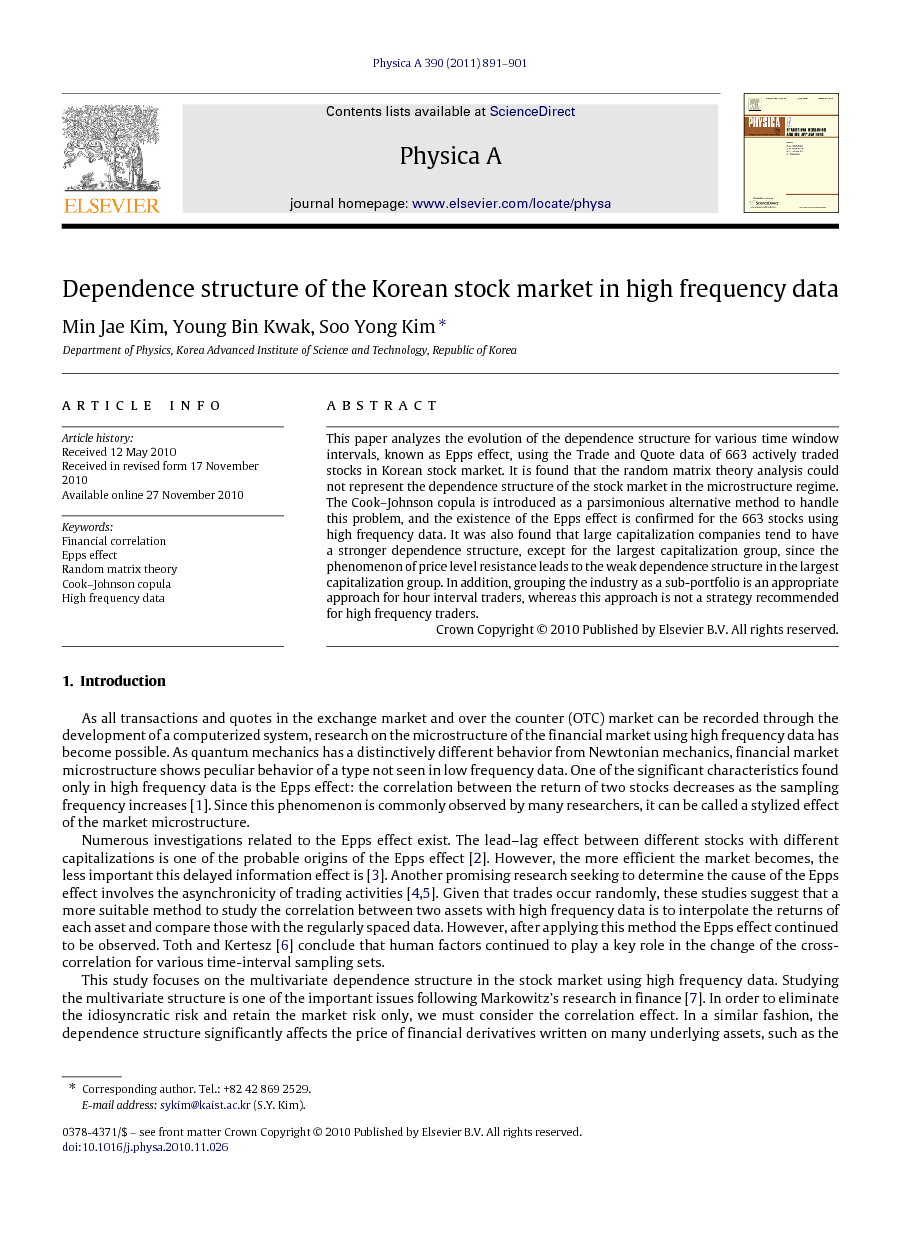 This paper analyzes the evolution of the dependence structure for various time window intervals, known as Epps effect, using the Trade and Quote data of 663 actively traded stocks in Korean stock market. It is found that the random matrix theory analysis could not represent the dependence structure of the stock market in the microstructure regime. The Cook–Johnson copula is introduced as a parsimonious alternative method to handle this problem, and the existence of the Epps effect is confirmed for the 663 stocks using high frequency data. It was also found that large capitalization companies tend to have a stronger dependence structure, except for the largest capitalization group, since the phenomenon of price level resistance leads to the weak dependence structure in the largest capitalization group. In addition, grouping the industry as a sub-portfolio is an appropriate approach for hour interval traders, whereas this approach is not a strategy recommended for high frequency traders.

As all transactions and quotes in the exchange market and over the counter (OTC) market can be recorded through the development of a computerized system, research on the microstructure of the financial market using high frequency data has become possible. As quantum mechanics has a distinctively different behavior from Newtonian mechanics, financial market microstructure shows peculiar behavior of a type not seen in low frequency data. One of the significant characteristics found only in high frequency data is the Epps effect: the correlation between the return of two stocks decreases as the sampling frequency increases [1]. Since this phenomenon is commonly observed by many researchers, it can be called a stylized effect of the market microstructure. Numerous investigations related to the Epps effect exist. The lead–lag effect between different stocks with different capitalizations is one of the probable origins of the Epps effect [2]. However, the more efficient the market becomes, the less important this delayed information effect is [3]. Another promising research seeking to determine the cause of the Epps effect involves the asynchronicity of trading activities [4] and [5]. Given that trades occur randomly, these studies suggest that a more suitable method to study the correlation between two assets with high frequency data is to interpolate the returns of each asset and compare those with the regularly spaced data. However, after applying this method the Epps effect continued to be observed. Toth and Kertesz [6] conclude that human factors continued to play a key role in the change of the cross-correlation for various time-interval sampling sets. This study focuses on the multivariate dependence structure in the stock market using high frequency data. Studying the multivariate structure is one of the important issues following Markowitz’s research in finance [7]. In order to eliminate the idiosyncratic risk and retain the market risk only, we must consider the correlation effect. In a similar fashion, the dependence structure significantly affects the price of financial derivatives written on many underlying assets, such as the basket option, the credit default swap, the multi-asset equity linked security, and others. Cross-correlation can also explain a renowned market anomaly such as the existence of excess profit in the moment strategy [8], [9] and [10]. In finance, the copula is well established to study the dependence structure of several assets and price the financial instrument which is derived from many number of underlying assets. The strength of the copula is that it can separate the marginal distribution of each variable and dependence structure of the system. On the contrary, the simple correlation assumes that each variable follows the normal distribution, and all variables are linearly dependent. Gaussian copula is popularly used to calibrate the dependence structure of assets for practitioners to handle the risk and produce new financial instruments. However, tt-copula is suggested to be more acceptable in the academic world because it can capture the fat tail structure and tail dependence of the return distribution [11] and [12]. Archimedean family requires only one parameter, so it is a parsimonious tool to analyze the dependence structure of the multivariable. Furthermore, it can capture the asymmetric return distribution; for instance, left tail for Clayton and Cook–Johnson Copula, and right tail for Gumbel copula [13], [14], [15] and [11]. Here, we choose the Cook–Johnson copula to study the dependence structure of Korea stock market because of its technical simplicity. This paper is constructed as follows. Section 2 reviews the random matrix theory (RMT) and introduces copula theory in detail because it is a relatively new concept in econophysics. In Section 3, high frequency data is analyzed using RMT for several time scales. This section demonstrates that the largest eigenvalue in a short time window data does not contain the market effect although the largest eigenvalue increases as the time window broadens like the Epps effect. The Epps effect is shown again using the alternative method, the Cook–Johnson copula. Then, the Epps effect among the different levels of capitalization groups is analyzed using the Cook–Johnson copula to compare our method with the previous study [2]. The Epps effect in the pooling assets based on industry index is also assessed to link the high frequency result to the results from finance and econophysics papers under low frequency. Finally, in Section 4 we conclude with a brief summary.