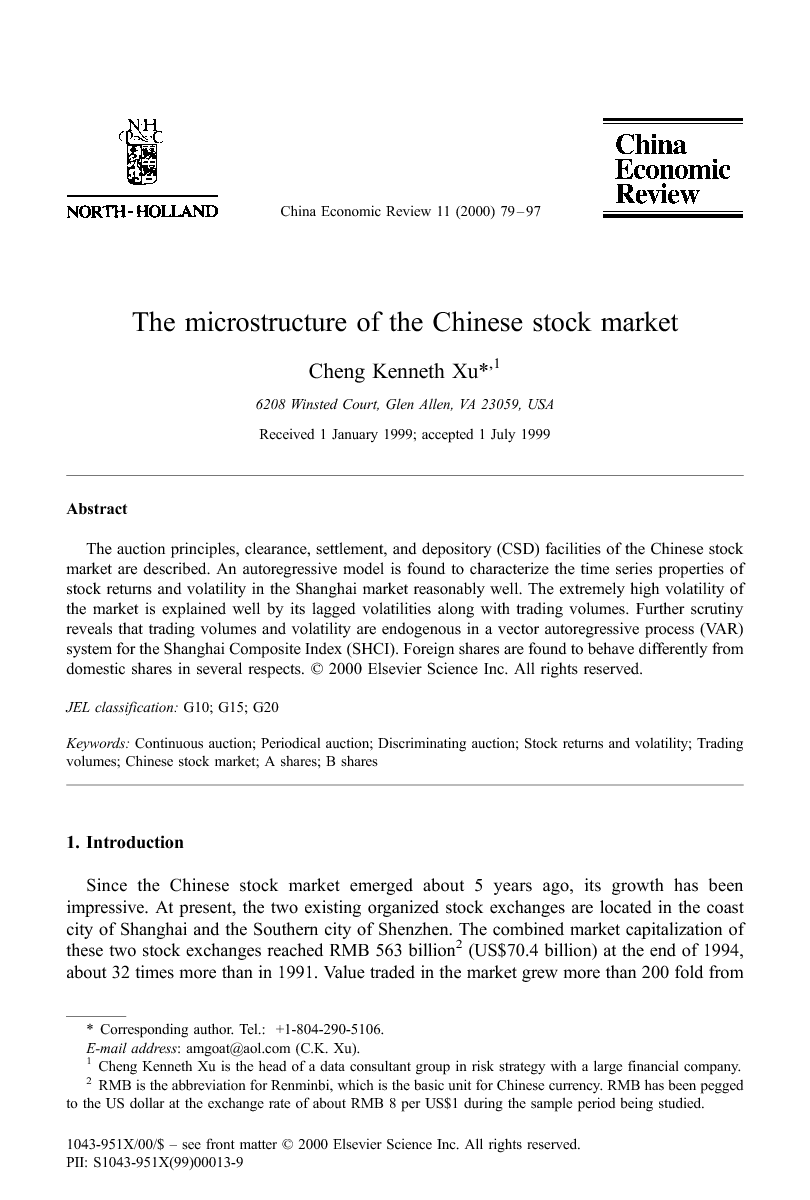 The auction principles, clearance, settlement, and depository (CSD) facilities of the Chinese stock market are described. An autoregressive model is found to characterize the time series properties of stock returns and volatility in the Shanghai market reasonably well. The extremely high volatility of the market is explained well by its lagged volatilities along with trading volumes. Further scrutiny reveals that trading volumes and volatility are endogenous in a vector autoregressive process (VAR) system for the Shanghai Composite Index (SHCI). Foreign shares are found to behave differently from domestic shares in several respects.

Since the Chinese stock market emerged about 5 years ago, its growth has been impressive. At present, the two existing organized stock exchanges are located in the coast city of Shanghai and the Southern city of Shenzhen. The combined market capitalization of these two stock exchanges reached RMB 563 billion2 (US$70.4 billion) at the end of 1994, about 32 times more than in 1991. Value traded in the market grew more than 200 fold from RMB 3 billion (US$0.4 billion) at the end of 1991 to RMB 612 billion (US$76.5 billion) in 1994. The number of listed companies increased from 14 to 336 in the same period. The number of individual stock investors exceeded 10 million by the end of 1994. There are two over-the-counter (OTC) trading systems (STAQ and NET), thousands of brokerage firms, as well as other securities related intermediaries, such as accounting firms, legal firms, and credit rating agencies. Moreover, the adoption of modern technology and a computerized automated order matching trading system, along with China's rapid economic growth have contributed to China's promising stock market development.3 Although there are many descriptive studies which review the history and development of China's stock market (e.g., Xia et al., 1992, Ma & Chung, 1993 and Karmel, 1994), there are a few empirical studies examining the return behavior of this market. Xu and Ma (1995) investigate market efficiency, the mean spillovers of stock returns between the Shanghai and Shenzhen markets, and the development of domestic market integration. Bailey (1994) studies the return behavior of foreign shares and found that these shares have diversification value in international portfolios but are not entirely separated from the international market. Despite the growing research interest in the Chinese stock market, several important issues remain unaddressed. First, the key elements regarding the microstructure of the market, such as its clearance, settlement, and depository (CSD) facilities, and the auction principles used to discover stock prices, have never been documented. Second, the time series properties of stock returns and volatility of the Chinese stock market have not been characterized by applying autoregressive models, which have been found useful in analyzing other stock markets. In particular, the extremely high volatility of the market has never been scrutinized. These issues are fundamental for understanding an emerging market and, therefore, will be closely examined in this study. The results derived from this study will serve as a reference to both academia and investors. This article is organized as follows. Section 2 describes the microstructure of the Chinese stock market. Section 3 describes the data and discusses the econometric methodology used in the study. Section 4 reports empirical results. This section first characterizes stock return and volatility behavior using an autoregressive model. It then studies the relationship between return volatility and trading volume. It finally scrutinizes the causality between return volatility and trading volume. Section 5 summarizes empirical results and concludes the article.

This article documents the microstructure of the Chinese stock market, especially the trading method used in that market. Using a novel data set, this study then scrutinizes stock returns and return volatility of China's stock market. The major findings can be summarized as follows. First, there is no statistically significant day-of-the-week effect in stock returns of the market, which is in sharp contrast with what has been found for other major markets. Second, the autoregressive model performs reasonably well in characterizing stock returns and volatility of the market, especially the volatility behavior of the SHCI. The power of this model in explaining the return volatility is enhanced further by adding trading volume as one of the independent variables. This is consistent with the results found from other major and Asian markets. Furthermore, while trading volume and return volatility are found to be endogenous in a VAR system for the SHCI, there is no evidence of causal relationship between volume and volatility for Shanghai B shares. Finally, B shares behave differently from the SHCI in terms of both stock returns and volatility.