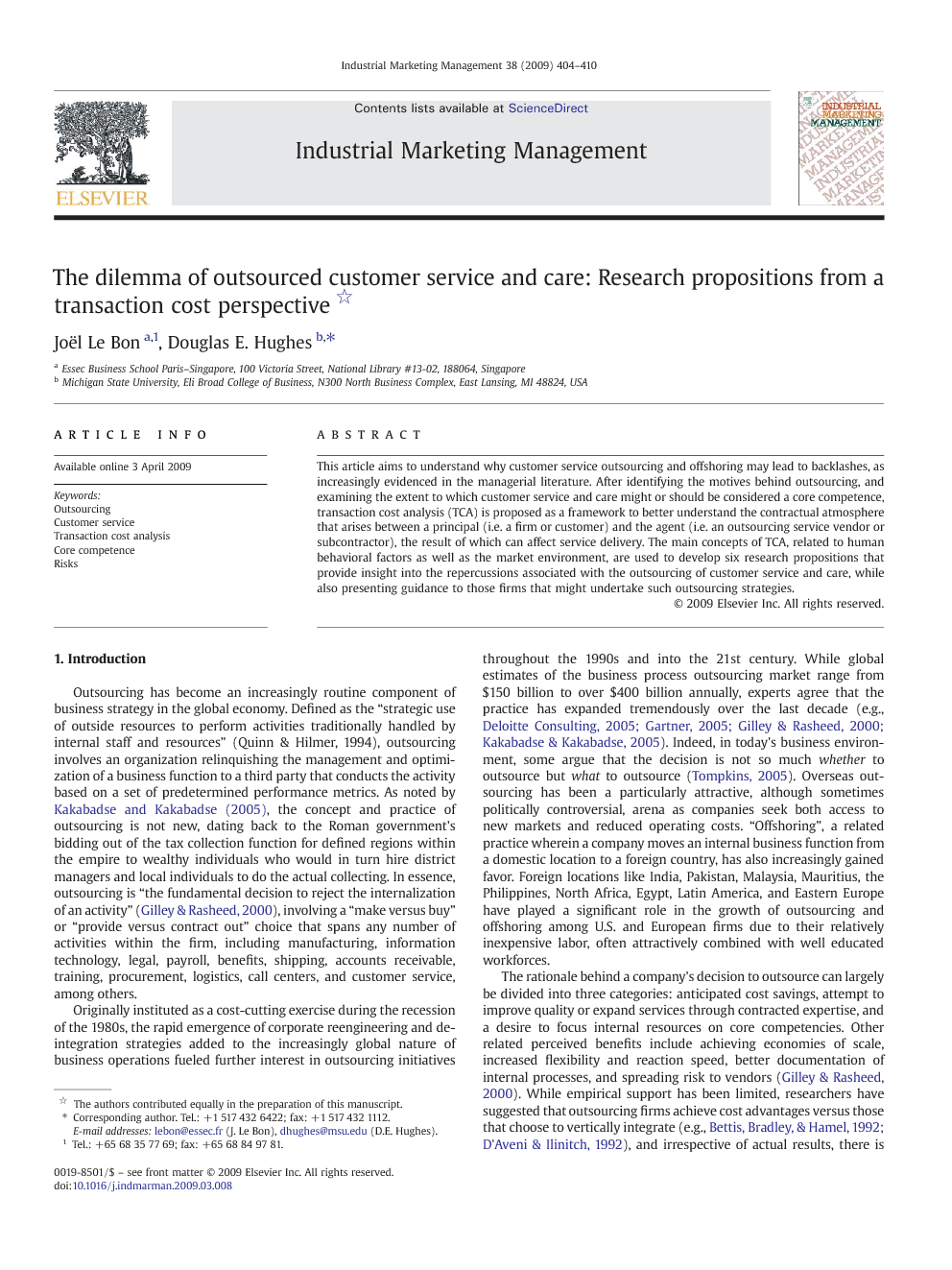 This article aims to understand why customer service outsourcing and offshoring may lead to backlashes, as increasingly evidenced in the managerial literature. After identifying the motives behind outsourcing, and examining the extent to which customer service and care might or should be considered a core competence, transaction cost analysis (TCA) is proposed as a framework to better understand the contractual atmosphere that arises between a principal (i.e. a firm or customer) and the agent (i.e. an outsourcing service vendor or subcontractor), the result of which can affect service delivery. The main concepts of TCA, related to human behavioral factors as well as the market environment, are used to develop six research propositions that provide insight into the repercussions associated with the outsourcing of customer service and care, while also presenting guidance to those firms that might undertake such outsourcing strategies.

Outsourcing has become an increasingly routine component of business strategy in the global economy. Defined as the “strategic use of outside resources to perform activities traditionally handled by internal staff and resources” (Quinn & Hilmer, 1994), outsourcing involves an organization relinquishing the management and optimization of a business function to a third party that conducts the activity based on a set of predetermined performance metrics. As noted by Kakabadse and Kakabadse (2005), the concept and practice of outsourcing is not new, dating back to the Roman government's bidding out of the tax collection function for defined regions within the empire to wealthy individuals who would in turn hire district managers and local individuals to do the actual collecting. In essence, outsourcing is “the fundamental decision to reject the internalization of an activity” (Gilley & Rasheed, 2000), involving a “make versus buy” or “provide versus contract out” choice that spans any number of activities within the firm, including manufacturing, information technology, legal, payroll, benefits, shipping, accounts receivable, training, procurement, logistics, call centers, and customer service, among others. Originally instituted as a cost-cutting exercise during the recession of the 1980s, the rapid emergence of corporate reengineering and de-integration strategies added to the increasingly global nature of business operations fueled further interest in outsourcing initiatives throughout the 1990s and into the 21st century. While global estimates of the business process outsourcing market range from $150 billion to over $400 billion annually, experts agree that the practice has expanded tremendously over the last decade (e.g., Deloitte Consulting, 2005, April, Gartner, 2005, Gilley and Rasheed, 2000 and Kakabadse and Kakabadse, 2005). Indeed, in today's business environment, some argue that the decision is not so much whether to outsource but what to outsource ( Tompkins, 2005). Overseas outsourcing has been a particularly attractive, although sometimes politically controversial, arena as companies seek both access to new markets and reduced operating costs. “Offshoring”, a related practice wherein a company moves an internal business function from a domestic location to a foreign country, has also increasingly gained favor. Foreign locations like India, Pakistan, Malaysia, Mauritius, the Philippines, North Africa, Egypt, Latin America, and Eastern Europe have played a significant role in the growth of outsourcing and offshoring among U.S. and European firms due to their relatively inexpensive labor, often attractively combined with well educated workforces. The rationale behind a company's decision to outsource can largely be divided into three categories: anticipated cost savings, attempt to improve quality or expand services through contracted expertise, and a desire to focus internal resources on core competencies. Other related perceived benefits include achieving economies of scale, increased flexibility and reaction speed, better documentation of internal processes, and spreading risk to vendors (Gilley & Rasheed, 2000). While empirical support has been limited, researchers have suggested that outsourcing firms achieve cost advantages versus those that choose to vertically integrate (e.g., Bettis et al., 1992 and D'Aveni and Ilinitch, 1992), and irrespective of actual results, there is little question that expected cost reduction is a major, if not primary, driver of the outsourcing decision (Deloitte Consulting, 2005, April, Prahalad, 2005, June and Quinn and Hilmer, 1994). Economic theories are prone to advise firms to look for cost reduction whenever it is possible to better rationalize business process efficiencies. The question of whether to internalize or externalize activities has been widely studied by Williamson, 1971, May, Williamson, 1975, Williamson, 1979, October and Williamson, 1985, leading to an important research stream on transaction cost analysis (TCA) (Rindfleisch & Heide, 1997). TCA defines the boundaries of a firm by asking whether a particular function or activity is better performed within the firm (vertical integration) or by entities outside the firm (outsourcing). Further, TCA is concerned with interfirm issues, specifically the governance structure or relationships between the company and its external partners, the result of which can affect the delivery of the service or activity being contracted out. However pertinent Williamson's theoretical foundations may be in understanding how a company should envision its outsourcing decisions, to our best knowledge, the literature does not provide yet a comprehensive theoretical framework explicating the potential downsides of such a business undertaking as it relates to customer service. A close look at Williamson's (1975) concept of the contract atmosphere between principal (company) and agent (contract service provider) may be instructive as to potential consequences for customers, and as such, warn firms on the implicit risks associated with customer service outsourcing and offshoring. Despite the concerns of managerial reports underlining the potential failures of outsourcing strategies (Deloitte Consulting, 2005), and recent well-publicized failures among several large American companies that resulted in scaling back or bringing back outsourced entities, such business process reorganization is still in fashion. Hence, this article addresses two specific questions: 1) Could backlashes associated with customer service outsourcing be predicted? 2) How can theory be useful in guiding and warning companies confronted with a decision of outsourcing customer service operations? Thus, the main objective of this research is to develop and justify a theoretical framework ultimately rooted in the TCA literature that leads to research propositions about customer service outsourcing decisions. We first question the concept of core competency in the context of outsourcing; we then examine to what extent customer service and care might or should be considered a core competency; in a third part, we identify some cautionary considerations for outsourcing that may arise from the TCA literature; and we finally conclude with a TCA-based set of research propositions that should be considered when outsourcing is at stake.

Thisarticledevelopsatheoreticalframeworkbasedonthetransaction cost analysis that calls for managerial awareness of the risks and backlashes which may be associated with the use of customer service outsourcing. First, we integrate a discussion of the motivations behind customer service outsourcing and recent real-world concerns with the execution of such strategies with broad considerations stemming from the literature on core competency, market orientation, and customer service. Then, using TCA, we develop and justifysix researchpropositions that identify conditional warnings of what could happen when fi rms contractwiththemarkettohandletheircustomerserviceoperations.We stated that fi rms must carefully consider the number of customer service vendors in the competitive landscape, the speci fi c assets that are mastered or not by them, the uncertainty surrounding the contract agreements dimensions, the behavioral uncertainty related to perfor- mance measurements, and the risks of the impact on the customer care competency due to the potential backlashes. Toourbestknowledge,ourframeworkisthe fi rstoneattemptingto specify the main elements that are critical in theoretically explaining theconditionsthatfomentbacklashestocustomerserviceoutsourcing as reported in the managerial literature. However, our paper presents some speci fi c limitations which can be viewed as research opportu- nities to test and expand upon the theoretical propositions. First, an empiricalvalidationofthedevelopedassumptionsisexpectedtoverify our assertions. Such an empirical validation would make a genuine theoreticalandmanagerialcontribution.Inaddition,futureresearchin this area could provide best practice guidelines aimed at minimizing risk when contemplating outsourcing customer service. From the theoretical side, besides adding and enriching the explanatory power of TCA in a non explored area, this could also con fi rm an anticipated relationship between customer service out- sourcing and the inevitable ex post risks and backlashes on the customer care competency. As a consequence, a managerial contribu- tion could be one of challenging the popular thinking that customer service outsourcing is acceptable because of being related to a non- cor e competency activity. Hence, the fi ndings might enhance the potential impact that outsourcing can have on the fi rm's perceived core incompetence in the customers' eyes. A second limitation of the paper is that due to its conceptual nature, we do not speak directly to the operationalization of the proposed variables for this particular research. While measurement of most concepts with respect to the TCA framework would appear to be relatively straightforward, (e.g., see Rind fl eisch & Heide,1997 ), the capture of backlashes has yet to be proposed and validated. Furthermore, we see an important challenge in measuring the perceived core customer care competency from the customer'sperspective.Becausecustomerservice outsourcing addsan independentmiddleman (i.e.thevendor)betweenthecustomers and the company, we expect a dissimilar caring attitude from outsourced operators that may not feel as involved as in-house agents would be. It could be fruitful to investigate how differences in organizational identi fi cation and organizational commitment among employees and outsourcing contractors affect service deliveryand costs in the context of our framework. We also would suggest taking advantage of the literature on justice perception to address the different management issues of customer care and delight. Beside the mentioned research limitations, this paper calls for additional theoretical understanding of two interesting issues. The fi rst issue deals with the contracts companies might want to develop with vendors beyond a de fi nitive outsourcing one. That is to say, the customer outsourcing problem is in fact an application of a more fundamental theoretical framework of the nature of fi rms and their frontiers. When trying to provide an answer to why and how fi rms exist and develop their relationships with the market, Williamson (1971, 1979) aimed to de fi ne the more appropriate organizational governance, which might also be hybrid in nature. Thus, one might want to investigate the ef fi ciencies of alternative outsourcing contracts that would not be limited to ones of separated legal entities between a fi rm and an independent subcontractor. For example, with respect to offshoring, several options are available beside the full outsourcing one, i.e. buy services from a local provider, enter into a joint venture, or set up a captive oversea center ( Aron & Singh, 2005 ). Inexploringsuchoptions, somerisks andbacklashesmightbe avoided or reduced as interdependencies are maintained with the outsourced customer service entity. Additional research should address these issues of hybrid contractual atmospheres. Another important research opportunity that comes from the one noting and in retrospect explaining backlashes, is providing the theoretical rationale that may explain why companies actually do outsource their customer service and care. We believe that the TCA may again be of help through the prism of the concept of bounded rationality. Indeed, following Simon (1957) , a decision maker is unable to integrate all the information of his/her complex and uncertain environment. As a consequence, he/she will take for granted the fi rst satisfying criteria that will come out from his/her outsourcing decisional process because of not being able to analyze and anticipate all the potential consequences. As mentioned earlier, the anticipated cost savings criteria may very often arise as the fi rst satisfying output of outsourcing decisions. Hence, it may hide the other potential risks that may also come with any customer service outsourcing operation. As bounded rationality is, to our best knowl- edge the only TCA concept that has not yet been integrated and tested empirically ( Rind fl eisch& Heide,1997 ), we believe it may be of helpto better understand the not always rational managerial decision of outsourcing such a critical competence as customer service and care.