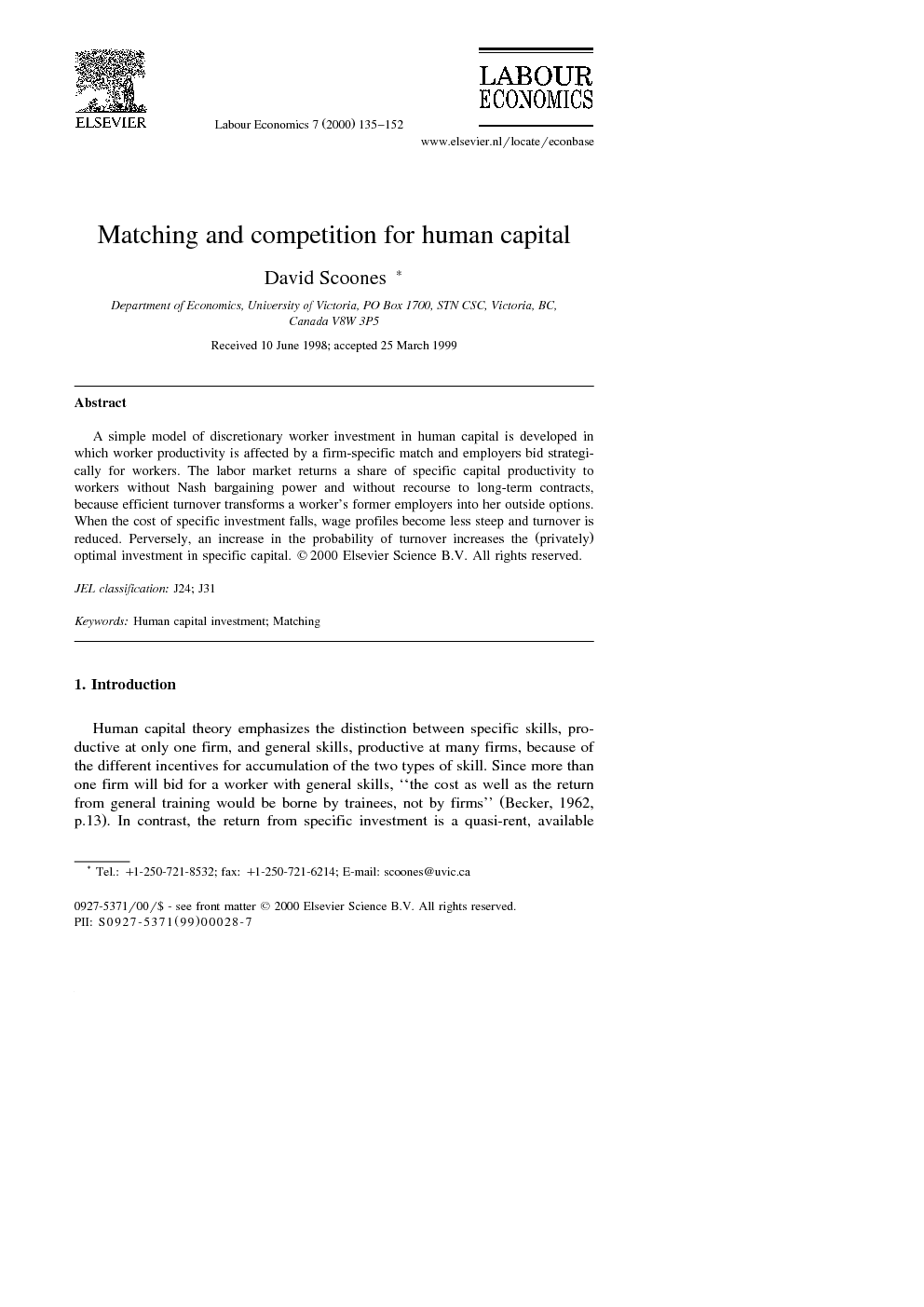 A simple model of discretionary worker investment in human capital is developed in which worker productivity is affected by a firm-specific match and employers bid strategically for workers. The labor market returns a share of specific capital productivity to workers without Nash bargaining power and without recourse to long-term contracts, because efficient turnover transforms a worker's former employers into her outside options. When the cost of specific investment falls, wage profiles become less steep and turnover is reduced. Perversely, an increase in the probability of turnover increases the (privately) optimal investment in specific capital.

This paper constructs a model in which firms hold all of the bilateral bargaining power, yet worker–firm matching ensures that workers receive a share of productivity increases resulting from relationship-specific investment. Part of the wage increase comes in the initial wage, not as a result of firms financing specific investment to ensure that workers undertake it, but rather from firms competing to attract workers whom they know will yield higher profits when trained. The size of the wage increase is related to the potential investment in specific skills at firms other than that which wins the worker. In an industry for which opportunities across firms for human capital investment are very similar, this would look like an upfront payment for specific investment. Workers undertake specific investments, looking forward to future competition between their current employer and outside firms. In some cases, workers with poorer current matches may even invest more in specific capital. The fact that wage tenure profiles depend on both realized and potential investments in human capital complicates the testing of human capital models in the presents of matching. This might explain the results in Levine (1993), where doubt is expressed about the usefulness of human capital theory based on the finding that workers, who (according to their own assessment) perform jobs which require extensive training, face wage profiles which are no steeper, and have turnover rates that are no lower than those who work in low training jobs. It is straightforward to alter the model so that workers invest more in specific than general human capital. The easiest way is to redefine the functions H or C. Alternatively, Bernhardt and Scoones (1993) develop a model of promotion in which specific capital yields an additional benefit to workers. There firms are asymmetrically informed about the general capital of workers. When workers accumulate specific capital, employers are less reluctant to reveal their general skills by promoting them. If this promotion effect is strong enough, it may outweigh the higher direct wage incentive of general capital. Many questions cannot be addressed in this simple two-period model. It would be interesting to know if a multiperiod model could explain the wage and career dynamics reported in Topel and Ward (1992), e.g., how do career mobility and investment in human capital evolve? If employers bidding for experienced workers knew that these workers might leave again, how would their offers be affected? These questions are the subject of future research.