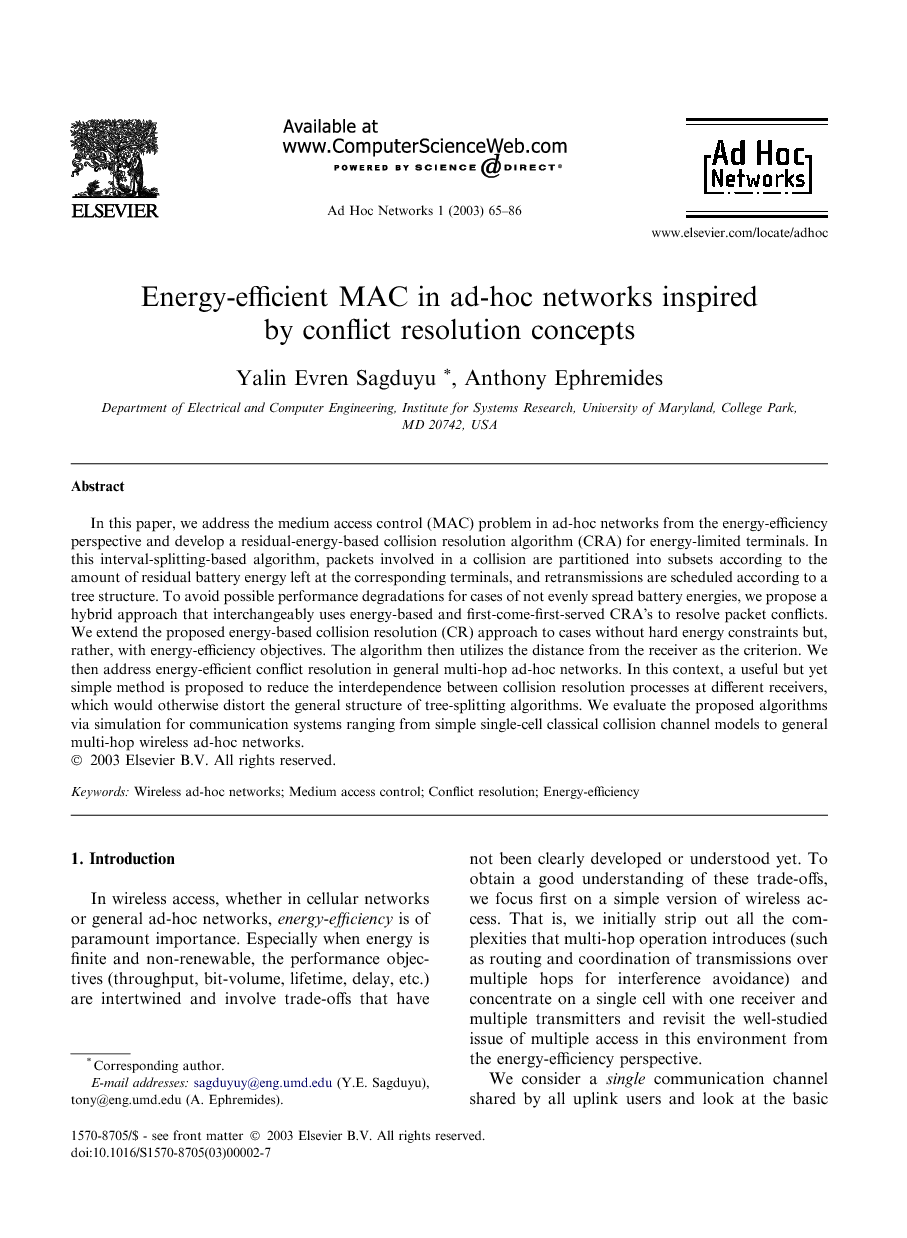 In this paper, we address the medium access control (MAC) problem in ad-hoc networks from the energy-efficiency perspective and develop a residual-energy-based collision resolution algorithm (CRA) for energy-limited terminals. In this interval-splitting-based algorithm, packets involved in a collision are partitioned into subsets according to the amount of residual battery energy left at the corresponding terminals, and retransmissions are scheduled according to a tree structure. To avoid possible performance degradations for cases of not evenly spread battery energies, we propose a hybrid approach that interchangeably uses energy-based and first-come-first-served CRA’s to resolve packet conflicts. We extend the proposed energy-based collision resolution (CR) approach to cases without hard energy constraints but, rather, with energy-efficiency objectives. The algorithm then utilizes the distance from the receiver as the criterion. We then address energy-efficient conflict resolution in general multi-hop ad-hoc networks. In this context, a useful but yet simple method is proposed to reduce the interdependence between collision resolution processes at different receivers, which would otherwise distort the general structure of tree-splitting algorithms. We evaluate the proposed algorithms via simulation for communication systems ranging from simple single-cell classical collision channel models to general multi-hop wireless ad-hoc networks.

In wireless access, whether in cellular networks or general ad-hoc networks, energy-efficiency is of paramount importance. Especially when energy is finite and non-renewable, the performance objectives (throughput, bit-volume, lifetime, delay, etc.) are intertwined and involve trade-offs that have not been clearly developed or understood yet. To obtain a good understanding of these trade-offs, we focus first on a simple version of wireless access. That is, we initially strip out all the complexities that multi-hop operation introduces (such as routing and coordination of transmissions over multiple hops for interference avoidance) and concentrate on a single cell with one receiver and multiple transmitters and revisit the well-studied issue of multiple access in this environment from the energy-efficiency perspective. We consider a single communication channel shared by all uplink users and look at the basic form of random access that was proven to have the best stable throughput properties, namely the one based on conflict resolution [1], [2], [3] and [4]. We focus on random, rather than scheduled, access because at some level (perhaps at the reservation subchannel level) some form of random access will be unavoidable in any wireless network. The main idea in our paper is to base the criterion for splitting the number of interfering users not on ID [1] or arrival time [2], as was done before, but on the amount of residual energy left at each node. This novel criterion produces surprising performance gains. The premise of using residual battery energies as tree-splitting criteria for conflict resolution relies on accurate and precise monitoring of battery capacities by individual nodes. Advances in portable battery technology provide practical solutions for accurate measurements of battery energies, which are also theoretically supported by discrete-time stochastic battery models for high level power and accurate battery-lifetime estimation [5], [6] and [7]. We consider both the simple classical collision channel model as well as the signal-to-interference-plus-noise-ratio (SINR)-based physical model for packet collision. We then allow mobility (which has significant effect on performance of the SINR-based model) and then, after showing the performance gain achieved, we outline an extension of our approach to multi-hop ad-hoc networks. We consider both the case of finite, non-renewable energy as well as the case of unlimited energy in which, however we require energy-efficient operation. In this paper, we introduce several energy-efficiency concepts using conflict resolution algorithms as reliable means for random access. However, our objectives fall short of proposing a medium-access-control (MAC) protocol ready to use in wireless ad-hoc networks. We believe that energy-based conflict resolution promises energy-efficient solutions for random access and should be studied in detail before we can clearly understand how to utilize these ideas in a full-fledged MAC protocol. The paper is organized as follows. Section 2 is devoted to the energy-limited case for a single cell with a finite number of nodes that have uniformly distributed amounts of initial battery energy. We describe our residual-energy-based tree-splitting (REBS) algorithm and compare its performance to the first-come-first-served (FCFS) algorithm as well as to the purely random tree-splitting (RS) algorithm. In this section, we also explore the dependence of performance measures on energy interval partitioning methods, battery energy measurement errors as well as feedback errors. In Section 3, we revise the REBS algorithm to make it applicable to the case of nodes with equal amounts of initial battery energy. We propose a hybrid approach that employs a quaternary interval partitioning method to start with FCFS algorithm and gradually switch to REBS algorithm. Section 4 introduces a new energy-efficiency criterion for conflict resolution in systems without hard energy constraints and describes a distance-based tree-splitting (DBS) algorithm. In Section 5, we analyze the interactions between collision resolution processes in multi-receiver systems and develop a partial decoupling method based on load-balancing among contending nodes. This is followed by the extension of our energy-based approach to multi-hop ad-hoc networks and a brief study of routing effects on the performance of the CRA’s in Section 6. Finally, we draw some conclusions and outline thoughts for future work in Section 7.

In this paper, we addressed the MAC problem in energy-limited wireless networks and outlined energy-efficient solutions inspired by conflict resolution ideas. Our objective was not to propose a full-fledged MAC protocol but rather to show via simulations that energy-based conflict resolution approach can have feasible applications in wireless communication networks ranging from simple collision channels to multi-hop ad-hoc networks. We first presented a residual-energy-based CRA that increases throughput, extends node lifetimes, decreases average CRP lengths and energy costs for successfully transmitted packets in single-cell systems. We identified the performance loss of the REBS algorithm in the particular case, when all nodes start operating with equal initial energy. To solve this problem partially, we proposed a hybrid approach that interchangeably uses the FCFS and REBS algorithms throughout the CR process, and showed via simulations that this method achieves desirable performance gains in the case of equal initial energy at the expense of increased complexity. We then applied these ideas to energy-efficient operation for the case of unlimited energy supply, where instead of the residual energy we employed the distance between transmitter and receiver as the criterion for splitting. Note that we used both the conventional collision channel as well as the physical model that takes SINR values into account. We also evaluated the performance under mobility, which is important for the case of physical model. Furthermore, we extended the notion of residual-energy-based conflict resolution to multi-hop ad-hoc networks and developed a simple method to reduce the interdependence between the simultaneous CR processes at different receivers, which might otherwise cause severe performance degradation. Further studies should concentrate on extending this CR tree-decoupling method based on a simplified packet reception criterion to more sophisticated reception models as well as to networks with arbitrary number of nodes and arbitrary topologies.