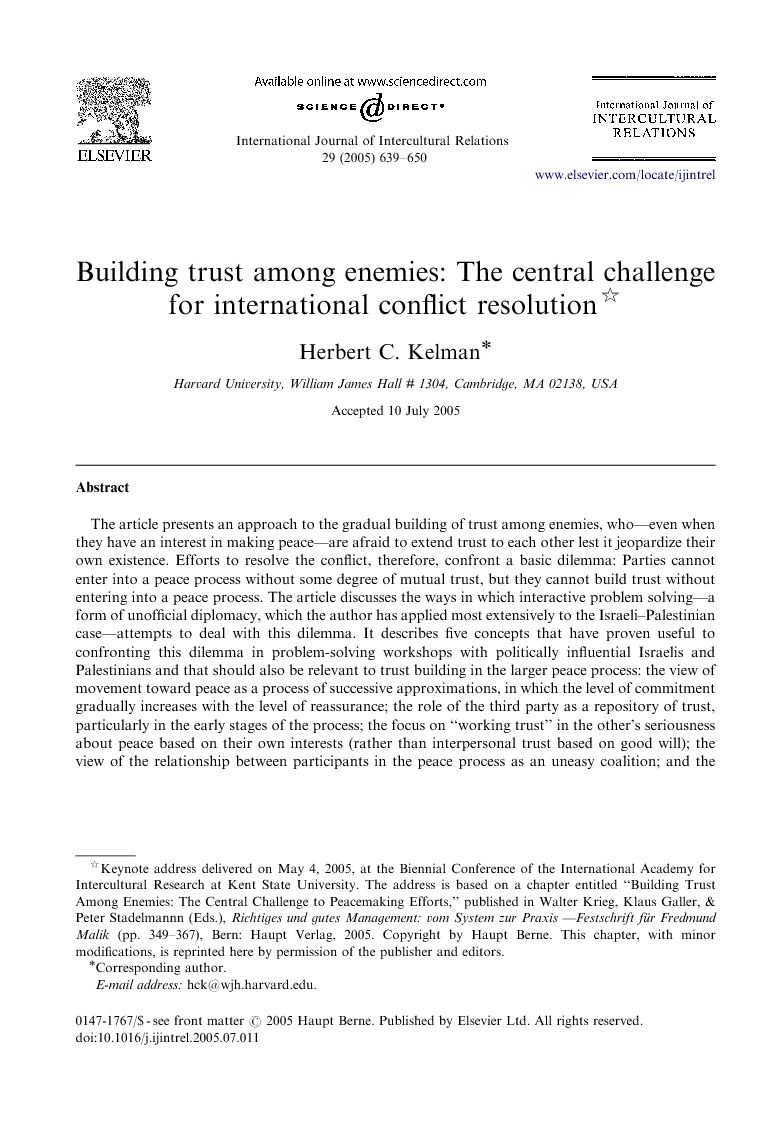 The article presents an approach to the gradual building of trust among enemies, who—even when they have an interest in making peace—are afraid to extend trust to each other lest it jeopardize their own existence. Efforts to resolve the conflict, therefore, confront a basic dilemma: Parties cannot enter into a peace process without some degree of mutual trust, but they cannot build trust without entering into a peace process. The article discusses the ways in which interactive problem solving—a form of unofficial diplomacy, which the author has applied most extensively to the Israeli–Palestinian case—attempts to deal with this dilemma. It describes five concepts that have proven useful to confronting this dilemma in problem-solving workshops with politically influential Israelis and Palestinians and that should also be relevant to trust building in the larger peace process: the view of movement toward peace as a process of successive approximations, in which the level of commitment gradually increases with the level of reassurance; the role of the third party as a repository of trust, particularly in the early stages of the process; the focus on “working trust” in the other's seriousness about peace based on their own interests (rather than interpersonal trust based on good will); the view of the relationship between participants in the peace process as an uneasy coalition; and the development of a systematic process of mutual reassurance, based on responsiveness and reciprocity.

Today is the thirty-fifth anniversary of the shootings on the Kent State University campus, which took place on May 4, 1970. The shootings at Kent State shocked the entire country and marked an important turning point in public attitudes toward the Vietnam War. The violence at Kent State reflected the high degree of mutual distrust between university students and political authorities that had built over the course of the war years. Students increasingly lost trust in the government's policy in Vietnam and administration of the military draft. The authorities, in turn—at the state and national levels—had lost trust in universities, students, and indeed all dissenting elements (cf. Taylor, Shuntich, McGovern, & Genther, 1971, p. 150). Trust is a central requirement for the peaceful and effective management of all relationships—between individuals, between groups, and between individuals or groups and the organizations and societies to which they belong. Trust is an essential ingredient in both communal and exchange relationships (cf. Clark & Mills, 1979). In a communal relationship, such as friendship or marriage, mutual trust is a given. The relationship is defined by the parties’ responsiveness to each other's needs and concern for each other's welfare, and there is a strong normative expectation that they will not harm or deceive each other and that each will look out for the other's interests. A violation of trust precipitates a serious crisis in a communal relationship and often marks the end of it. In an exchange relationship, mutual trust is a fundamental condition for the advancement of the parties’ interests. For example, Malik (2003) lists it as one of six core principles of effective management. Trust in the relationship between managers and their subordinates and colleagues is not a given, but it must be built and tested over time. To build a relationship of mutual trust, as Malik points out, managers must extend trust to their subordinates (though not without checking against possible abuse of this trust) and they must earn the trust of their subordinates by their own trustworthy behavior (Malik, 2003, pp.149–163). The development of mutual trust is equally essential in efforts to resolve conflict and transform the relationship between enemies into a relationship characterized by stable peace and cooperation. But, by definition, the conditions for creating trust between enemies are elusive at best—particularly in deep-rooted, protracted conflicts between identity groups, such as the Israeli–Palestinian conflict, on which much of my work has focused for more than 30 years. In such relationships, in contrast to communal relationships, mutual distrust is a given: Both parties believe—usually with a long history of supporting evidence—that the other is bent on frustrating their needs, on undermining their welfare, and on causing them harm. Interestingly, civil wars and intercommunal conflicts share one characteristic with communal relationships: a high degree of interdependence between the parties. The adversaries live in close proximity of each other and their lives are inextricably intertwined. Separation is extremely difficult to achieve, as recent events in the Israeli–Palestinian relationship have demonstrated. But interdependence by itself cannot transform a relationship marked by profound mutual distrust. A peace process becomes possible when the parties conclude that it is in their own best interest to negotiate an end to the conflict—in effect, to enter into an exchange relationship. As enemies, however, the parties are severely handicapped in their ability and readiness to follow Malik's recommendations for building the trust on which a productive exchange depends. They are afraid to extend trust to the other because they consider it likely that they will be betrayed, at great cost to their own side. They are reluctant to be open, truthful, and generous in their interactions, because they consider it likely that the other side will take advantage of them. Although each party may have a genuine interest in making peace, it is unwilling to risk acting on the assumption that the enemy shares that interest. Thus, efforts to resolve international or intercommunal conflicts—particularly existential conflicts between identity groups, each of which perceives the other as a fundamental threat to its own existence—confront a difficult dilemma: The parties cannot enter into a peace process without some degree of mutual trust, but they cannot build trust without entering into a peace process. Distrust thus has a self-perpetuating quality. It keeps the parties from engaging in the kinds of interaction that could potentially help them develop trust in the other's readiness to make peace. The conflict resolution work in which my colleagues and I have been engaged over the years, with special emphasis on the Israeli–Palestinian case, can be seen as a contribution toward overcoming that dilemma. After a brief description of interactive problem solving—my approach to conflict resolution—I shall discuss five concepts that have evolved in the course of our work and that point to ways in which we try to deal with the dilemma of building trust among enemies so as to enable them to begin and advance a productive peace process.

My approach to building trust among enemies is modest and cautious, as exemplified by the five concepts that I have described. I start with the assumption that parties caught up in a conflict between identity groups necessarily enter a peace process with deep suspicion of one another. The roots and dimensions of that suspicion can be readily understood. I do not urge them to take a leap of faith into trusting one another or to transcend their profound mutual distrust by forging personal bonds of friendship. Our program is not based—as some of its detractors or even some of its supporters have mistakenly assumed—on the proposition that peace between groups engaged in a deep-rooted conflict can be achieved through personal contact and the establishment of personal relationships among their members. To the contrary, our starting point is the assumption that distrust among enemies is inherent in the relationship, understandable, and even necessary. It must be reduced slowly, gradually, and on the basis of persuasive evidence that the reality is changing. Thus, I propose that movement toward peace entails a process of successive approximations, in which commitments made are commensurate with assurances received; that the conflicting parties need a third party as a repository of trust to be able to begin exploring a new relationship; that they must start out by developing working trust in each other's seriousness about making peace out of their own interests, rather than interpersonal trust based on good will; that they must be cautious about forming excessively cohesive coalitions across the conflict lines, lest they lose credibility in their own communities; and that they must engage in a systematic process of mutual reassurance, based on responsiveness and reciprocity, in order to build and maintain trust in the peace process and the peace partner. Responsiveness and reciprocity at the core of mutual influence represent the means for weaving interests and justice into a common framework for conflict resolution and ultimate reconciliation.