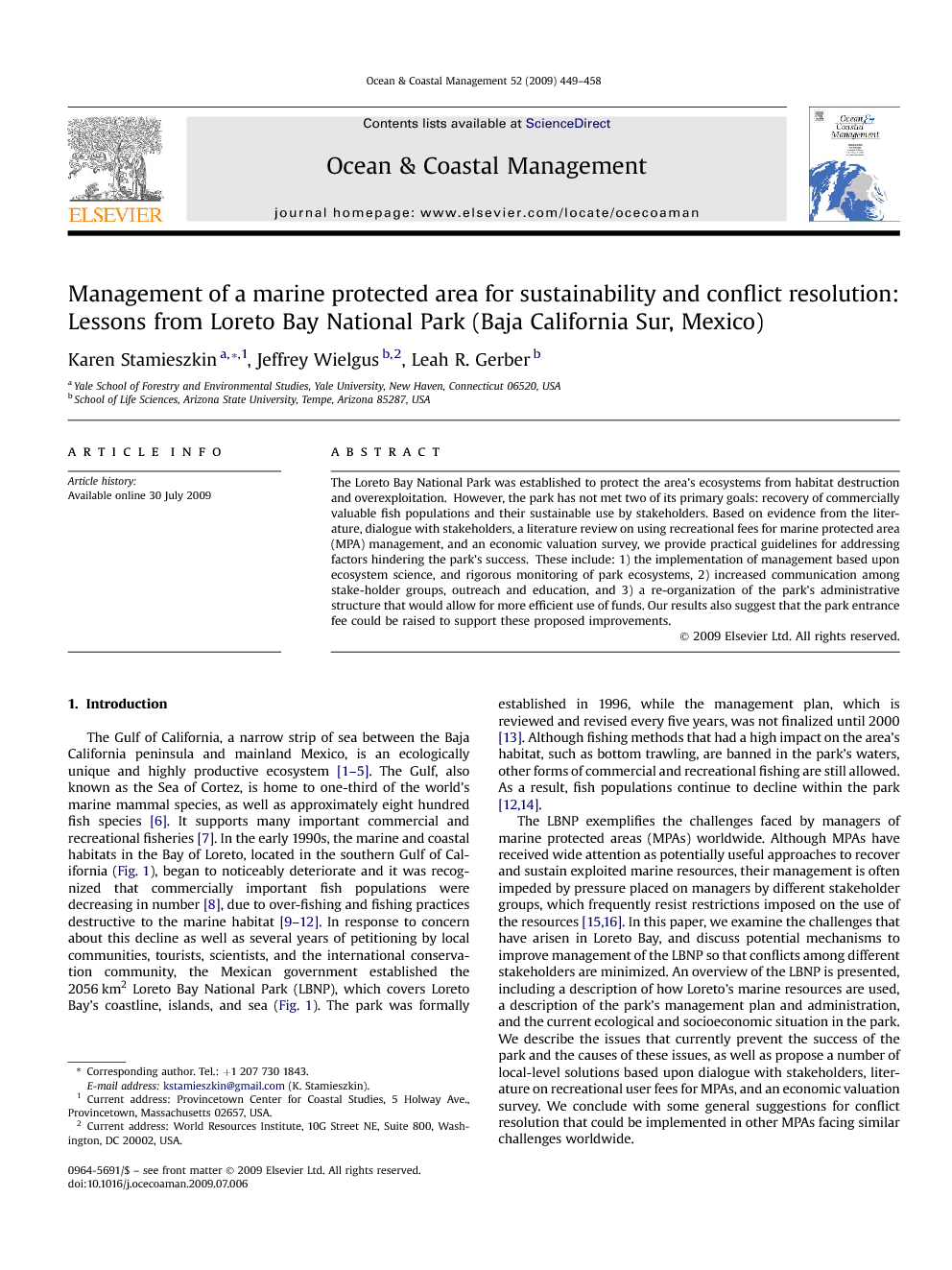 The Loreto Bay National Park was established to protect the area's ecosystems from habitat destruction and overexploitation. However, the park has not met two of its primary goals: recovery of commercially valuable fish populations and their sustainable use by stakeholders. Based on evidence from the literature, dialogue with stakeholders, a literature review on using recreational fees for marine protected area (MPA) management, and an economic valuation survey, we provide practical guidelines for addressing factors hindering the park's success. These include: 1) the implementation of management based upon ecosystem science, and rigorous monitoring of park ecosystems, 2) increased communication among stake-holder groups, outreach and education, and 3) a re-organization of the park's administrative structure that would allow for more efficient use of funds. Our results also suggest that the park entrance fee could be raised to support these proposed improvements.

The Gulf of California, a narrow strip of sea between the Baja California peninsula and mainland Mexico, is an ecologically unique and highly productive ecosystem [1], [2], [3], [4] and [5]. The Gulf, also known as the Sea of Cortez, is home to one-third of the world's marine mammal species, as well as approximately eight hundred fish species [6]. It supports many important commercial and recreational fisheries [7]. In the early 1990s, the marine and coastal habitats in the Bay of Loreto, located in the southern Gulf of California (Fig. 1), began to noticeably deteriorate and it was recognized that commercially important fish populations were decreasing in number [8], due to over-fishing and fishing practices destructive to the marine habitat [9], [10], [11] and [12]. In response to concern about this decline as well as several years of petitioning by local communities, tourists, scientists, and the international conservation community, the Mexican government established the 2056 km2 Loreto Bay National Park (LBNP), which covers Loreto Bay's coastline, islands, and sea (Fig. 1). The park was formally established in 1996, while the management plan, which is reviewed and revised every five years, was not finalized until 2000 [13]. Although fishing methods that had a high impact on the area's habitat, such as bottom trawling, are banned in the park's waters, other forms of commercial and recreational fishing are still allowed. As a result, fish populations continue to decline within the park [12] and [14]. The LBNP exemplifies the challenges faced by managers of marine protected areas (MPAs) worldwide. Although MPAs have received wide attention as potentially useful approaches to recover and sustain exploited marine resources, their management is often impeded by pressure placed on managers by different stakeholder groups, which frequently resist restrictions imposed on the use of the resources [15] and [16]. In this paper, we examine the challenges that have arisen in Loreto Bay, and discuss potential mechanisms to improve management of the LBNP so that conflicts among different stakeholders are minimized. An overview of the LBNP is presented, including a description of how Loreto's marine resources are used, a description of the park's management plan and administration, and the current ecological and socioeconomic situation in the park. We describe the issues that currently prevent the success of the park and the causes of these issues, as well as propose a number of local-level solutions based upon dialogue with stakeholders, literature on recreational user fees for MPAs, and an economic valuation survey. We conclude with some general suggestions for conflict resolution that could be implemented in other MPAs facing similar challenges worldwide.