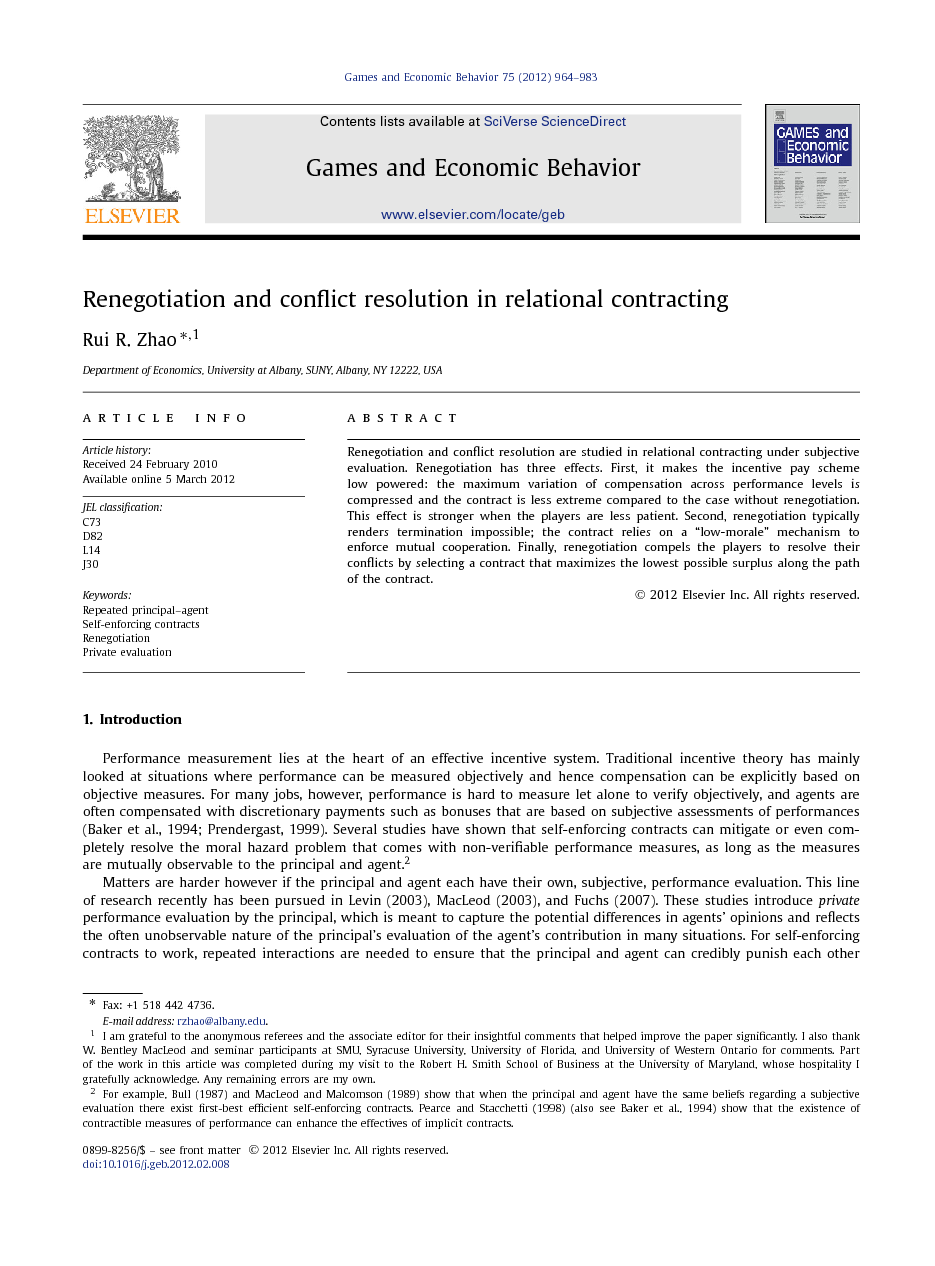 Renegotiation and conflict resolution are studied in relational contracting under subjective evaluation. Renegotiation has three effects. First, it makes the incentive pay scheme low powered: the maximum variation of compensation across performance levels is compressed and the contract is less extreme compared to the case without renegotiation. This effect is stronger when the players are less patient. Second, renegotiation typically renders termination impossible; the contract relies on a “low-morale” mechanism to enforce mutual cooperation. Finally, renegotiation compels the players to resolve their conflicts by selecting a contract that maximizes the lowest possible surplus along the path of the contract.

This paper studies a simple repeated principal–agent model with private evaluation. To provide incentive for the agent to exert effort, relational contracts necessarily destroy surpluses in the form of inefficiently low effort following low pay.When the two parties cannot bind themselves to such ex post inefficient agreements, they try to negotiate away from them. The effective outcome that can survive such renegotiations is called renegotiation proof. Renegotiation-proofness imposes an endogenous floor on the surplus from any continuation contract. This floor generally is above the default level of surplus from terminating the relationship. As such, recurrent low morale becomes an indispensable part of renegotiationproof contracts. These results shed light on periodic conflicts in organizations and in general long-run relationships where subjective and private evaluations are important and commitment to harsh punishments is difficult to sustain.My results also show that in such environments the incentive contracts may appear to be low powered compared with the situation when evaluation is subjective and renegotiation is absent. Since low-powered incentive contracts and subjective evaluation are commonly observed at the same place, an explanation for their co-existence is important. As pointed out in the introduction, subjective evaluation does not automatically render incentive contracts useless, because there are ways to circumvent the issue of verifiability and enforceability and to provide essentially the same kind of incentives for the agent as the case when evaluation is objective. By taking into account of the possibility of renegotiation, the result in this paper is able to offer an explanation for the co-existence of low-powered incentive contracts and subjective evaluation.An important extension of the present model is to allow risk-averse agents. The contract then has to take into consideration intertemporal risk sharing.Also, in the present paper my analysis focuses on public equilibrium and renegotiation is allowed in every period.10 It would be interesting to consider the case when the principal could delay her report on the agent’s performance and accordingly renegotiation is permitted only infrequently. From the work of Abreu et al. (1991), Fuchs (2007), and others we know that infrequent information release will enhance efficiency in the current model. On the other hand, infrequent information release also relies on harsher punishments to enforce cooperation. Then renegotiation could play a bigger role as it limits the severity of punishment and thereby restrict the delay of information release. This is a potentially interesting avenue for future research.