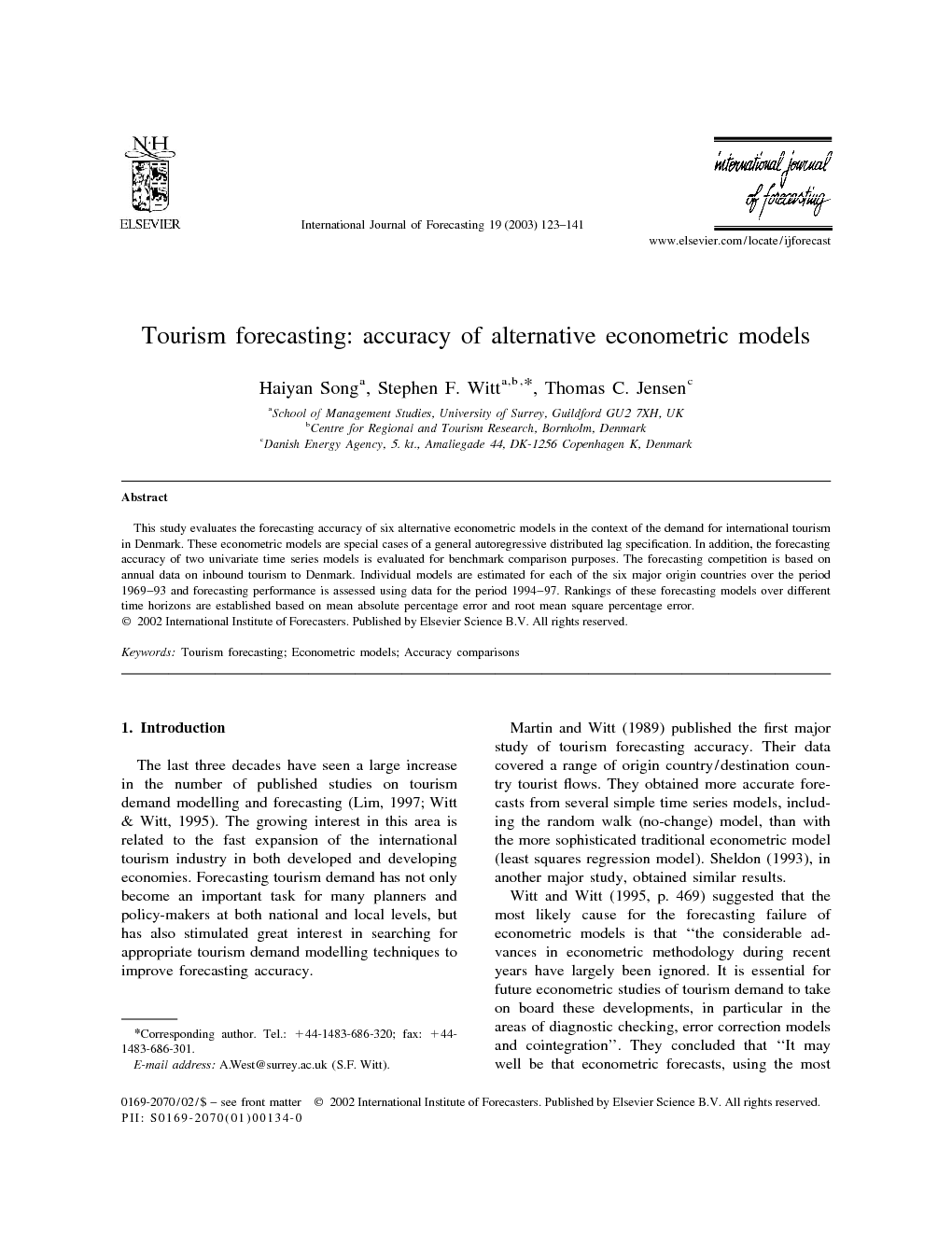 This study evaluates the forecasting accuracy of six alternative econometric models in the context of the demand for international tourism in Denmark. These econometric models are special cases of a general autoregressive distributed lag specification. In addition, the forecasting accuracy of two univariate time series models is evaluated for benchmark comparison purposes. The forecasting competition is based on annual data on inbound tourism to Denmark. Individual models are estimated for each of the six major origin countries over the period 1969–93 and forecasting performance is assessed using data for the period 1994–97. Rankings of these forecasting models over different time horizons are established based on mean absolute percentage error and root mean square percentage error.

The relative forecasting accuracy of six econometric models has been evaluated. These models comprise: a static regression; two ECMs, one based on the WB approach and the other on the JML approach; an ADLM; an unrestricted VAR model (in differences form); and a TVP model. In addition, two univariate time series models — an ARIMA model and the no-change model — have been included in the comparison. The forecasting performance of the various models has been assessed using data on international tourism demand. The empirical results show that the TVP model generates the most accurate one-year-ahead forecasts, followed by the static model, but that the no-change model is not far behind. The TVP and static models generate the most accurate two-years-ahead forecasts, but it is not possible to differentiate between these models in terms of forecasting performance. Again the no-change model is not far behind. For three- and four-years-ahead forecasts the static model is ranked first. For every forecasting horizon — one, two, three and four years ahead — the JML and ARIMA models generate the least accurate forecasts. These empirical results have clear implications for practitioners. It should, however, be borne in mind that the results regarding the static tourism demand model relate to the case where the variables in the model are cointegrated. The superiority of the TVP model over its competitors for short-term forecasting suggests that it is important to take structural instability into consideration when generating short-term tourism demand forecasts. This empirical result is consistent with the findings of previous research on international tourism where the TVP model has been shown to outperform alternative forecasting models in the short run (Song and Witt, 2000). It also supports the empirical results obtained in other studies related to the demand for housing and food (Song et al., 1996, Song et al., 1997 and Brown et al., 1997). The WB model outperforms the JML model, even though two cointegration relationships were identified for three of the six origin countries. This shows the importance of taking small sample problems into account in tourism demand forecasting, and suggests that it is more important to allow for small sample size than multiple cointegration relationships. This empirical result supports the decision by Jensen (1998) to choose the WB model when working with a limited number of observations on tourism demand. The superiority of the naı̈ve no-change model over the ECMs is in agreement with the empirical results obtained by Kulendran and Witt (2001) and Song and Witt (2000). These authors obtained the same outcome as in this study for completely different data sets (e.g. Kulendran and Witt examined UK outbound tourism to Germany, Greece, Netherlands, Portugal, Spain and USA using quarterly data). This demonstrates the non-data-specific nature of the result. (Kulendran & King (1997) have suggested that a possible reason for the relatively poor forecasting accuracy of ECMs is that the level of differencing required to achieve stationarity is determined by hypothesis testing, and it is well known that tests for unit roots often lack power.) Furthermore, the empirical finding that the no-change model generates more accurate tourism demand forecasts than the ARIMA model supports the findings of Chan (1993) and Kulendran and Witt (2001). In general, the no-change model performs well. It is ranked first, second or third (out of eight models) for 33% of origins for one-year-ahead forecasts and 50% of origins for two-years-ahead forecasts, according to both MAPE and RMSPE, and the lowest position reached in the aggregate (across all origins) accuracy rankings is fourth. The relatively poor forecasting performance of the VAR model for all forecasting horizons other than four years ahead may have arisen because it is the only causal model included in the forecasting comparison which generates ex ante forecasts. Alternatively, however, the low ranking may suggest that the distinction between endogenous and exogenous variables in tourism demand forecasting models is fairly clear, or at least that allowing for the distinction not to be clear does not result in more accurate forecasts except perhaps in the longer term.