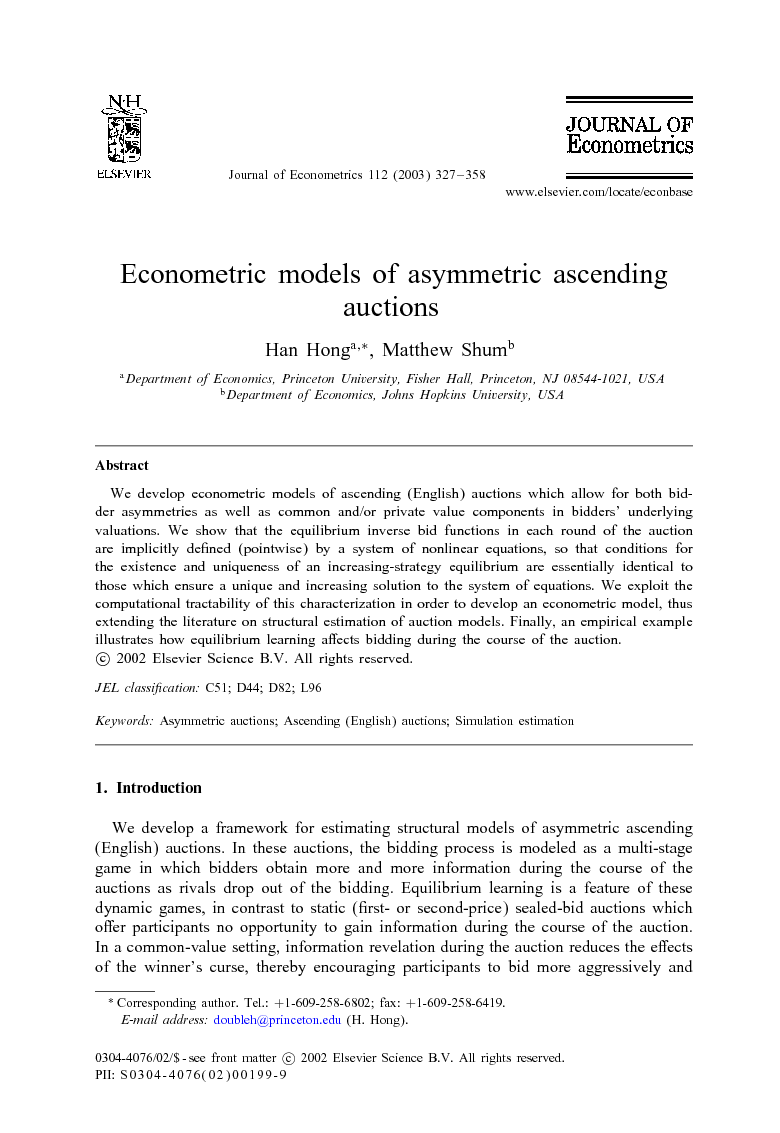 We develop econometric models of ascending (English) auctions which allow for both bidder asymmetries as well as common and/or private value components in bidders’ underlying valuations. We show that the equilibrium inverse bid functions in each round of the auction are implicitly defined (pointwise) by a system of nonlinear equations, so that conditions for the existence and uniqueness of an increasing-strategy equilibrium are essentially identical to those which ensure a unique and increasing solution to the system of equations. We exploit the computational tractability of this characterization in order to develop an econometric model, thus extending the literature on structural estimation of auction models. Finally, an empirical example illustrates how equilibrium learning affects bidding during the course of the auction.

We develop a framework for estimating structural models of asymmetric ascending (English) auctions. In these auctions, the bidding process is modeled as a multi-stage game in which bidders obtain more and more information during the course of the auctions as rivals drop out of the bidding. Equilibrium learning is a feature of these dynamic games, in contrast to static (first- or second-price) sealed-bid auctions which offer participants no opportunity to gain information during the course of the auction. In a common-value setting, information revelation during the auction reduces the effects of the winner's curse, thereby encouraging participants to bid more aggressively and raising expected seller revenue relative to a sealed-bid auction. Many real-world auction mechanisms—from art and collectible auctions to the Japanese “button” auction cited by Milgrom and Weber (1982, p. 1104)—resemble the auctions we study, and perhaps these mechanisms arose to allow for the possibility of information revelation. The theoretical literature on ascending auctions (including the paradigmatic model presented in Milgrom and Weber (1982)) has focused primarily on symmetric models, in which the bidders’ signals about the value of the object are assumed to be generated from identical distributions. However, recent applied research in auctions (e.g. work by Hendricks and Porter (1988) on offshore gas auctions, and by Klemperer (1998) on the PCS spectrum auctions) suggests that symmetry may not be a realistic assumption for many real-world situations. For these reasons, we develop an econometric framework for asymmetric ascending auctions which can be used in applied analyses. We begin with a brief characterization of Bayesian–Nash equilibrium bidding behavior in asymmetric ascending auctions. This complements recent work (Maskin and Riley, 2000; Bulow et al., 1999; Bajari, 1998; Campo et al., 1998; Froeb et al., 2000) on asymmetric first-price auctions, and by Wilson (1998) and Maskin and Riley (2000) on asymmetric ascending auctions. We find that the increasing-strategy equilibrium bid functions in each round of an ascending auction exhibit an attractive analytic property: specifically, the inverse bid functions are implicitly defined by a system of nonlinear equations, pointwise in the bids. Therefore, conditions for the existence of an increasing-strategy equilibrium are essentially identical to those which ensure an increasing solution to the system of equations, given primitive model assumptions about the joint distribution of the bidders’ underlying valuations and private signals. This attractive analytic property also facilitates numerical calculation of the equilibrium bidding strategies, which makes the econometric implementation of these models feasible. This was recognized by Wilson (1998), who analytically derives the equilibrium bid functions for a log-additive log-normal asymmetric ascending auction model given a diffuse prior assumption on the distribution of the common value component. Following this cue, we develop an econometric model of the asymmetric ascending auction for this log-additive case which differs from Wilson's model in that we do not assume a diffuse prior for the common value distribution.1 This extends the scope of the literature on the structural estimation of auction models (e.g. Paarsch, 1992; Laffont et al., 1995; Li et al., 2000) to asymmetric ascending auctions within the CV paradigm. Perhaps the closest antecedents of our work are papers by Donald et al. (1997) on bidding in simultaneous ascending auctions within the symmetric independent private values paradigm, and by Bajari and Hortacsu (1999) on bidding in symmetric common-value ascending auctions. We provide an empirical illustration of this model by estimating it using data from the PCS spectrum auctions run by the U.S. Federal Communications Commission (FCC). While our model accommodates the multiple-round aspect of these auctions, it does not include other essential details, such as the simultaneous selling of multiple licenses, and the flexible eligibility rules. Therefore, we view the main purpose of this example as illustrating the econometric model and suggesting solutions to problems which arise in implementing the estimation method in practice, rather than providing robust empirical findings concerning the FCC auctions.2 We present estimated bid functions which illustrate how equilibrium learning affects bidding behavior during the course of an ascending auction. We start, in Section 2, by a brief description of equilibrium bidding behavior in the asymmetric ascending auction. In Section 3 we develop an econometric model based on a log-normal specification of the auction model, and discuss estimation issues in Section 4. Section 5 contains the empirical example, and Section 6 concludes.

We have characterized an increasing-strategy Bayesian Nash equilibrium in asymmetric ascending (English) auctions. We showed that the equilibrium (inverse) bidding strategies in each round of the auction are defined implicitly via systems of nonlinear equations. This formed the basis of an algorithm we devised to calculate the likelihood function for an observed vector of bids. In the case that bidders’ private signals are drawn from nonidentical log-normal distributions, we show that the vector of log-dropout prices observed in a given ascending auction is distributed as truncated multivariate normal. We illustrated the use of this model with data from the FCC spectrum auctions, and estimated examples of bid functions to demonstrate how equilibrium learning affects bidding behavior in ascending auctions. An important extension to our current model is to relax the irrevocable dropout assumption. However, the result may be an “open call” auction which, as noted by Vickrey (1961), is strategically equivalent to a sealed bid second-price auction (since, essentially, without the irrevocable dropout requirement, no information can be credibly revealed during the course of the auction). Nonetheless, there has been very little work to date on the structural estimation of sealed bid second-price auction models accommodating both common values and asymmetries.28 This may be due in part to the difficulties involved in calculating equilibrium bidding strategies in these auctions. However, the empirical framework developed in this paper can be directly generalized to other auction formats, including the first- and second-price sealed bid auctions. The common element in all these auction models is that the equilibrium bid functions are described by systems of equations, which facilitates the numerical or computational algorithms required for empirical implementation of these models. We discuss these issues in more detail in Hong and Shum (1999), and we plan to apply this methodology to first- and second-price auction settings in future research.