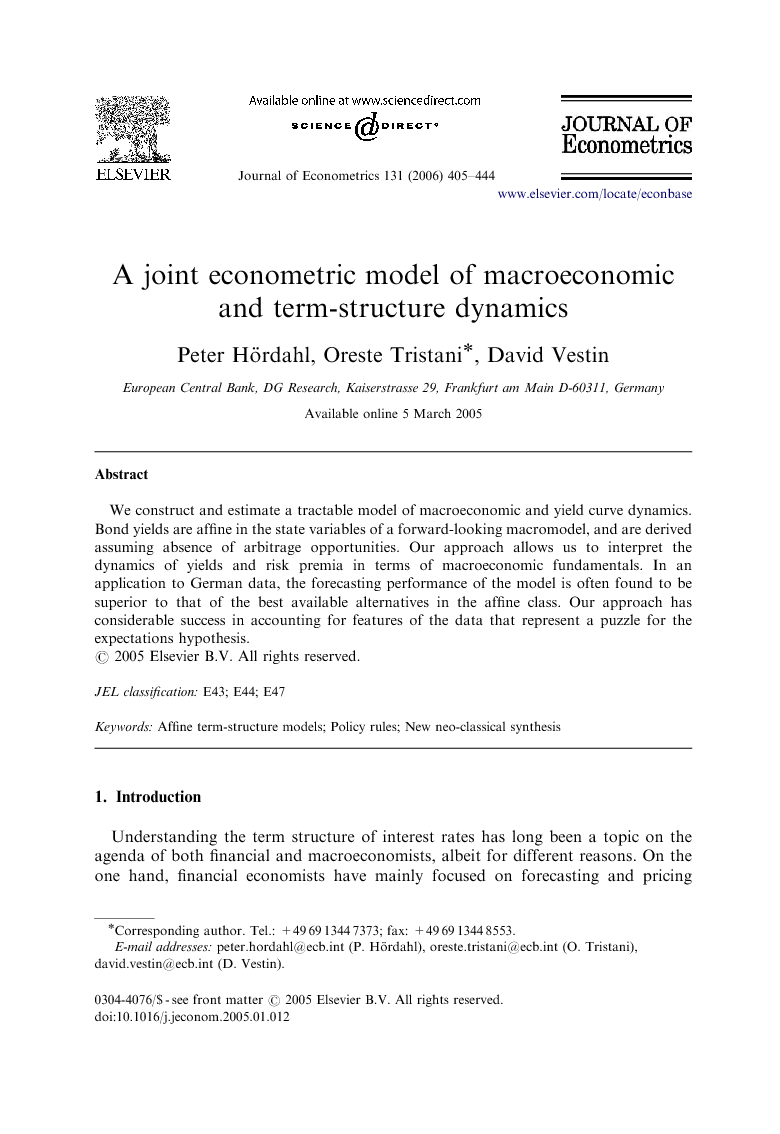 We construct and estimate a tractable model of macroeconomic and yield curve dynamics. Bond yields are affine in the state variables of a forward-looking macromodel, and are derived assuming absence of arbitrage opportunities. Our approach allows us to interpret the dynamics of yields and risk premia in terms of macroeconomic fundamentals. In an application to German data, the forecasting performance of the model is often found to be superior to that of the best available alternatives in the affine class. Our approach has considerable success in accounting for features of the data that represent a puzzle for the expectations hypothesis.

Understanding the term structure of interest rates has long been a topic on the agenda of both financial and macroeconomists, albeit for different reasons. On the one hand, financial economists have mainly focused on forecasting and pricing interest rate-related securities. They have therefore developed powerful models based on the assumption of absence of arbitrage opportunities, but typically left unspecified the relationship between the term structure and other economic variables. Macroeconomists, on the other hand, have focused on understanding the relationship between interest rates, monetary policy and macroeconomic fundamentals. In doing so, however, they have typically relied on the “expectations hypothesis’’, in spite of its poor empirical record. Combining these two lines of research seems fruitful, in that there are potential gains going both ways. This paper aims at presenting a unified empirical framework where a small structural model of the macroeconomy is combined with an arbitrage-free model of bond yields. We build on the work of Piazzesi (2005) and Ang and Piazzesi (2003), who introduce macroeconomic variables into the standard affine term structure framework based on latent factors—e.g. Duffie and Kan (1996) and Dai and Singleton (2000). The main innovative feature of our paper is that we use a structural macroeconomic framework rather than starting from a reduced-form VAR representation of the data. One of the advantages of this approach is to allow us to relax Ang and Piazzesi's restriction that inflation and output be independent of the policy interest rate, thus facilitating an economic interpretation of the results. Our framework is similar in spirit to that in Wu (2002), who prices bonds within a calibrated rational expectations macromodel. The difference is that we estimate our model and allow a more empirically oriented specification of both the macroeconomy and the market price of risk.1 Our estimation results, based on German data, show that macroeconomic factors affect the term structure of interest rates in different ways. Monetary policy shocks have a marked impact on yields at short maturities, and a small effect at longer maturities. Inflation and output shocks mostly affect the curvature of the yield curve at medium-term maturities. Changes in the perceived inflation target have more lasting effects and tend to have a stronger impact on longer term yields. Our results also suggest that including macroeconomic variables in the information set helps to forecast yields. The out-of-sample forecasting performance of our model is superior to that of the best available affine term-structure models for most maturities/horizons. Finally, we show that the risk premia generated by our model are sensible. First, the model can account for the features of the data which represent a puzzle for the expectations hypothesis, namely the finding of negative and large—rather than positive and unit—coefficients obtained, for example, by Campbell and Shiller (1991), in regressions of the yield change on the slope of the curve. Second, regressions based on risk-adjusted yields do, by and large, recover slope coefficients close to unity, i.e. the value consistent with the rational expectations hypothesis. The rest of the paper is organized as follows. Section 2 describes the main features of our general theoretical approach and then provides a brief overview of our estimation method. It also discusses the specific macroeconomic model which we employ in our empirical application. The estimation results, based on our application to German data, are described in Section 3. Section 4 then discusses the forecasting performance of our model, compared to leading available alternatives. The ability of the model to solve the expectations puzzle is tested in Section 5. Section 6 concludes.

This paper presents a general set-up allowing to jointly model and estimate a macroeconomic-plus-term structure model. The model extends the term structure literature, since it shows how to derive bond prices using no-arbitrage conditions based on an explicit structural macroeconomic model, including both forward-looking and backward-looking elements. At the same time, we extend the macroeconomic literature by studying the term structure implications of a standard macro-model within a dynamic no-arbitrage framework. In an empirical application, we show that there are synergies to be exploited from current advances in macroeconomic and term-structure modelling. The two approaches can be seen as complementary and, when used jointly, give rise to sensible results. Notably, we show that our estimates of macroeconomic parameters, that are partly determined by the term structure data, are consistent with those that would be estimated using only macroeconomic information. At the same time, our model's explanatory power for the term structure is comparable to that of term structure models based only on unobservable variables. We assess the performance of our model mainly along two dimensions: forecasting and ability to solve the expectations hypothesis puzzle. While yields do not seem to provide useful additional information in forecasting macroeconomic variables, our model performs very well in forecasting yields. We argue that this is both due to the inclusion of macroeconomic variables in the information set and due to the imposition of a large number of no-arbitrage and structural restrictions. Our macro-based term structure model can also match features of yield curve data which represent a puzzle for the expectations hypothesis. These results confirm that the dynamics of stochastic risk premia are important determinants of yield dynamics, and that all such dynamics can be ultimately reconducted to underlying macroeconomic dynamics within a consistent framework.