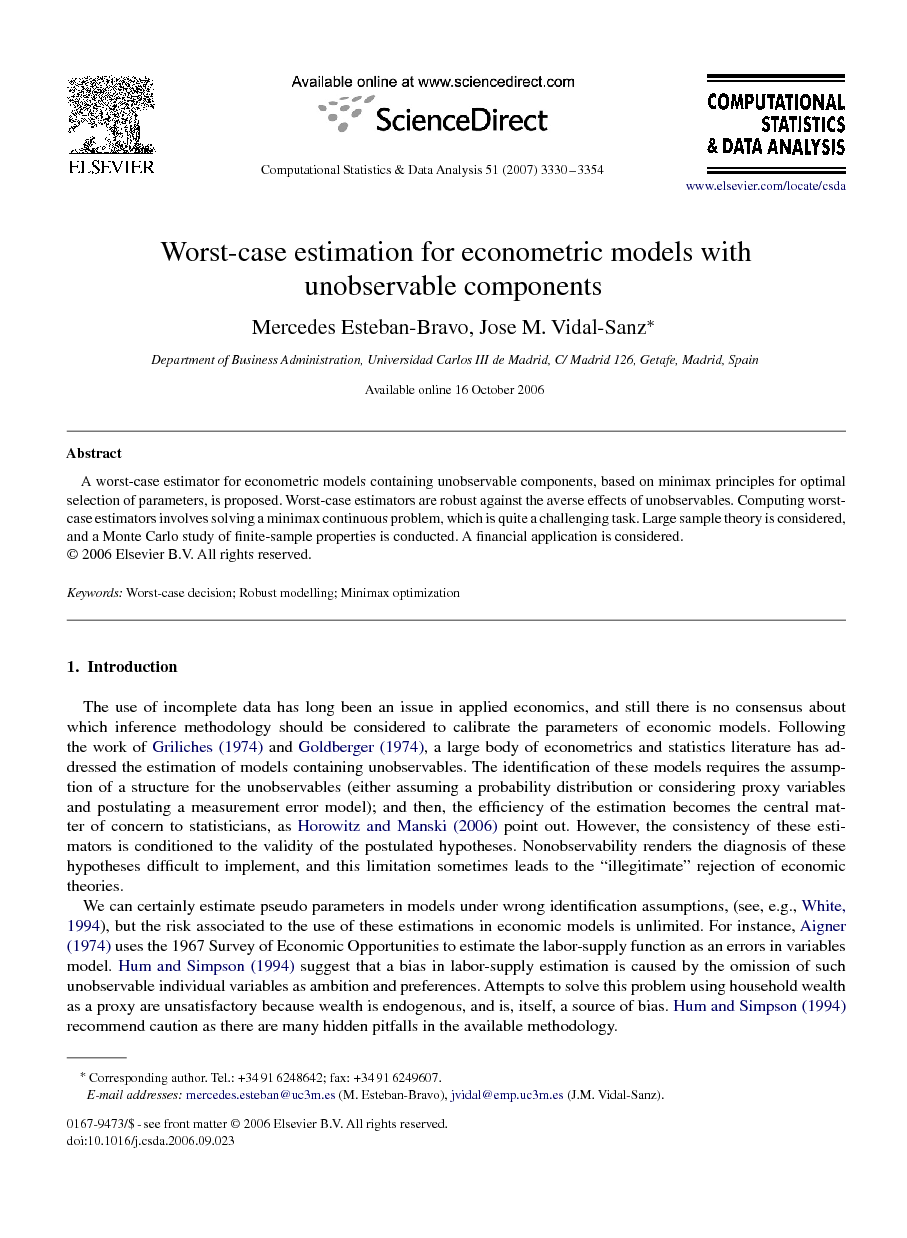 The use of incomplete data has long been an issue in applied economics, and still there is no consensus about which inference methodology should be considered to calibrate the parameters of economic models. Following the work of Griliches (1974) and Goldberger (1974), a large body of econometrics and statistics literature has addressed the estimation of models containing unobservables. The identification of these models requires the assumption of a structure for the unobservables (either assuming a probability distribution or considering proxy variables and postulating a measurement error model); and then, the efficiency of the estimation becomes the central matter of concern to statisticians, as Horowitz and Manski (2006) point out. However, the consistency of these estimators is conditioned to the validity of the postulated hypotheses. Nonobservability renders the diagnosis of these hypotheses difficult to implement, and this limitation sometimes leads to the “illegitimate” rejection of economic theories. We can certainly estimate pseudo parameters in models under wrong identification assumptions, (see, e.g., White, 1994), but the risk associated to the use of these estimations in economic models is unlimited. For instance, Aigner (1974) uses the 1967 Survey of Economic Opportunities to estimate the labor-supply function as an errors in variables model. Hum and Simpson (1994) suggest that a bias in labor-supply estimation is caused by the omission of such unobservable individual variables as ambition and preferences. Attempts to solve this problem using household wealth as a proxy are unsatisfactory because wealth is endogenous, and is, itself, a source of bias. Hum and Simpson (1994) recommend caution as there are many hidden pitfalls in the available methodology. In view of frequently expressed scepticism over untestable identification hypotheses in models containing unobservables, recent research has focused on conservative inferences enhancing the computation of finite sample bounds for the unidentified estimators (see, e.g., Horowitz and Manski, 1998, Horowitz and Manski, 2000 and Horowitz and Manski, 2006; Horowitz et al., 2003; Imbens and Manski, 2004; Chernozhukov et al., 2004; Honoré and Tamer, 2005; see also Fishman and Rubin, 1998). However, in the case of wide bounds there is little information about the parameter (Horowitz et al., 2003, p. 421); and again, the parameter can be only determined invoking untestable assumptions. The aim of this paper is to present a robust approach based on minimax principles for optimal selection and estimation of parameters in models with unobservables. In other words, we propose a worst-case (WC) strategy to seek optimal estimators—that we will call “worst-case” estimators—in the WC value of the unobservable components. The WC estimation procedure guarantees best upper-bound loss in view of the WC values of the unobservable variables. The WC estimation method should be seen as a complement approach to standard techniques that postulate distributional assumptions for the unobservable variables. A cautious modeller should consider different estimation methods and balance the resulting estimates to determine a robust model. Under appropriate conditions, we prove consistency and asymptotic normality of WC estimators. From a computational point of view, computing WC estimators is quite a challenging task, as it involves solving a minimax continuous problem. Pioneering contributions to the study of minimax optimization have been made by Danskin (1967), Bram (1966), Rockafellar (1970), and Dem’yanov and Malozemov (1972). We use the global optimization algorithm considered by Žaković and Rustem (2003). This approach first specifies an equivalent semi-infinite programming problem to the original problem and then solves the semi-infinite programming problem by a global optimization approach. WC techniques have also been appreciated in different economic contexts. Minimax principles have been applied in game theory in the study of decision making in n-person conflicts (see e.g., Rosen, 1965). In a WC strategy, decision makers seek to minimize the maximum damage that their rival can inflict upon them. When the rival can be interpreted as nature, rather than another individual, the WC strategy seeks optimal responses in the WC value of uncertainty. WC approach has also been appreciated in finance, with applications in portfolio management, see e.g. Balbás and Ibañez (2002), Rustem and Howe, 1997 and Rustem and Howe, 2002. The use of minimax approaches for designing robust economic policies has been considered by Hansen and Sargent (2001), linking max–min utility theory and robust control theory. The robust design of monetary policies based on minimax optimization have been considered by Rustem et al., 2005 and Rustem et al., 2002, Tetlow and von zur Muehlen (2001) and the unpublished monograph of Hansen and Sargent (2005), among others. Minimax principles have also been applied to different statistical problems, including such problem as the statistical efficiency of point estimators (see e.g., Lehmann, 1983, pp. 249–290), hypothesis tests for maximizing the minimum power when there is no uniformly most powerful test (see Lehmann, 1986, Chapter 9), uniform bounds for the consistency of nonparametric density estimators (see e.g., Devroye, 1987), optimal sampling designs from finite populations (see e.g., Gabler, 1990), robust estimation of wavelet regression models with unknown disturbance components (see e.g., Tian and Herzberg, 2006), computation of upper and lower bounds for variances of discrete variables (Fishman and Rubin, 1998) and robust Bayesian analysis minimizing the expected loss for the WC prior (Noubiap and Seidel, 2001). Huber (1964) introduces a groundbreaking robust method of estimating location parameters for contaminated normal distributions, minimizing the maximal (WC) asymptotic variance that can happen over a neighborhood of the specified model (see also Huber, 1994, Chapter IV). In Section 2 of this paper we present the WC estimation method. Section 3 is devoted to the asymptotic properties of the WC estimators. Section 4 extends the method to overidentified problems, presenting a WC generalized method of moments (GMM). Because minimax problems usually turn out to be too unmanageable for closed solutions Section 5 addresses the numerical computation of WC estimators. In Section 6, we conduct a Monte Carlo simulation to study the finite sample behavior of WC estimators. Section 7 presents an illustration of the applicability of the method to Economics. In the concluding section we summarize the findings and discuss how some regularity assumptions can be circumvented. Proofs are placed in the appendix.

This paper proposes a WC or minimax approach for estimating econometric models containing unobservable components. Instead of postulating parameters or distributional assumptions for the unobservable variables, we consider the estimators that best fit the available data in view of the worst realization of the unobservable. This method is robust with respect to the unknown probability distribution of unobservables. Computing WC estimators involves solving a minimax continuous problem, which is usually analytically intractable, and the use of efficient numerical methods is required. In particular, we use the global optimization algorithm considered by Žaković and Rustem (2003). The numerical results of Monte Carlo simulations and the financial illustration reveals that the proposed estimation method should be seen as an effective complement to other available methodologies with unobservables. WC estimators can be considered for other problems rather than unobservable data. For example: • when the specification of alternative nonnested models is considered. Let g1(Xt,θ),…,gS(Xt,θ)g1(Xt,θ),…,gS(Xt,θ) denote alternative log likelihood models. Then estimators can be constructed solving View the MathML sourceminθ∈Θmaxy∈Y1T∑t=1Tyjgj(Xt,θ), Turn MathJax on where View the MathML sourceY={y∈RS:∑j=1Syj=0,yj⩾0} is the positive simplex in RSRS; • in overidentified models with moment conditions E[gj(Xt,θ0)]=0E[gj(Xt,θ0)]=0 for j=1,…,Sj=1,…,S and Θ⊂RKΘ⊂RK with S>KS>K. When S is very large, the optimal GMM may have a high bias in small samples. To improve it, the literature has considered a particular type of WC estimators known as generalized empirical likelihood (GEL) estimators, given by View the MathML sourceargminθ∈Θmaxy∈Y1T∑t=1Tρ∑j=1Syjgj(Xt,θ), Turn MathJax on where YY is the positive simplex, ρρ an appropriate function and θ0=θwcθ0=θwc. GEL estimators have smaller high order bias and often smaller high order variance than GMM estimators; see Newey and Smith (2004) and Newey et al. (2005). These two applications show that the boundedness of YY is often satisfied in practice. However, there may exist situations in which it would be useful to relax this hypothesis and Lemma 2 can be used to overcome this issue. Let μwcμwc be a unique solution of problem (4) in Lemma 2. (1) If μwcμwc is absolutely continuous with density function mwc(y)mwc(y), consider a Schauder basis {φk}{φk} for the L1L1 space (although we may also assume that the density function belongs to L2L2 and set an orthonormal basis), then mwc(y)=∑kckφk(y)mwc(y)=∑kckφk(y) and we can estimate the solution to View the MathML sourceminθmaxμ∫Q(θ,y)μ(dy) by the solution to View the MathML sourceminθ∈Θmax{c1,…,cK}∑k=1Kck∫QT(θ,y)φk(y)dy. Turn MathJax on Often, a large but finite number of basis functions is enough to get a good approximation, and we can use the asymptotic results of this paper. Alternatively, if K→∞K→∞ when T→∞T→∞ it can be seen as a sieves estimation problem, but this case lies beyond the scope of this paper. (2) If μwcμwc has a finite number K of jumps, and we can estimate the solution to View the MathML sourceminθmaxμ∫Q(θ,y)μ(dy) by the solution to View the MathML sourceminθ∈Θmax{μi},{yi}∑i=1Kμi∫QT(θ,yi). Turn MathJax on Nonetheless, the boundedness of YY is in fact a condition that can be fully assumed in practice. Notice that economic variables are usually bounded; e.g. variables related to wealth, human or natural resources which are scarce and limited. Further, a practitioner can always establish the range of values of the unobservable with probability almost one from empirical work. This range could come from market agents or economic literature.