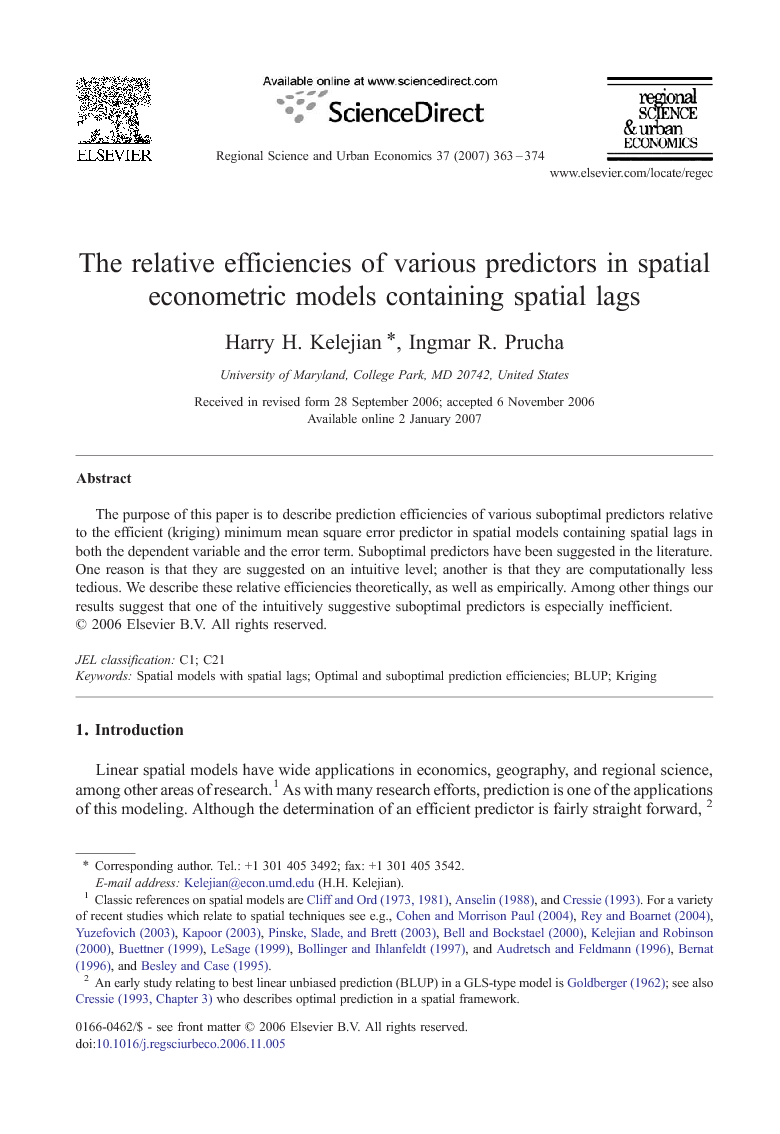 The purpose of this paper is to describe prediction efficiencies of various suboptimal predictors relative to the efficient (kriging) minimum mean square error predictor in spatial models containing spatial lags in both the dependent variable and the error term. Suboptimal predictors have been suggested in the literature. One reason is that they are suggested on an intuitive level; another is that they are computationally less tedious. We describe these relative efficiencies theoretically, as well as empirically. Among other things our results suggest that one of the intuitively suggestive suboptimal predictors is especially inefficient.

Linear spatial models have wide applications in economics, geography, and regional science, among other areas of research.1 As with many research efforts, prediction is one of the applications of this modeling. Although the determination of an efficient predictor is fairly straight forward, 2 suboptimal predictors have been considered in the literature. One reason for this is that suboptimal predictors are often suggested on an intuitive level; another is that they are typically computationally simpler than efficient predictors.3 Essentially, the purpose of this paper is to give results which illustrate the extent of inefficiencies of various predictors in a spatial model. Specifically, we consider prediction issues in the context of a linear spatial model which contains exogenous variables, a spatially lagged dependent variable, and a spatially lagged error term.4 In the context of this model, we consider three nested information sets which a researcher would have access to and might be considered for purposes of prediction. Corresponding to these information sets we consider three predictors defined as conditional means based on these information sets. We refer to the predictor based on the largest information set as the full information predictor, and to the other two predictors as limited information predictors. For future reference we note that the smallest of these information sets only contains the exogenous variables and the weighting matrix. As expected, predictors corresponding to the larger information sets are more complex than those corresponding to smaller sets, and so there are trade-offs between simplicity and prediction efficiency. We also consider a “user-friendly and intuitive” predictor which is biased, namely, the right hand side of the regression model. The bias arises because of the correlation between the spatially lagged dependent variable and the error term.5 Finally, we consider an intuitive but biased predictor, as well as the full information predictor in the context of a spatial error model as a special case of our general model. For each of our considered predictors we give an estimate of its predictive efficiency relative to the full information predictor. All of our results specialize to models in which one, or both of these spatial lags are absent. In addition, qualitative extensions to space-time models will become evident. As a preview, it turns out that in our general model the worst predictor, by far, is the conditional mean which is based only on the exogenous variables and the weighting matrix. For example, in the numerical experiments we considered, its predictive efficiency relative to that of the full information predictor is, on average, only between 4% and 12.2%. Although the biased predictor is a considerable improvement, it is still significantly worse than the full information predictor, as well as the other conditional mean predictor considered which recognizes spatial lags in both the dependent variable and in the error term. Interestingly, in the context of a spatial error model, the intuitive but biased predictor performs reasonably well in that its prediction efficiency relative to the full information predictor is, on average, between, roughly, 91.7% and 97.7%. Again, in this model the predictor determined as the conditional mean on the exogenous variables and weighting matrix is substantially worse than the other considered predictors. We also find that the prediction inefficiencies involved for all of our considered predictors relative to the corresponding full information predictor generally increase as the sparseness of the weighting matrix increases. The suggestion, therefore, is to avoid simpler but inefficient predictors when the weighting matrix is relatively sparse. Finally, the inefficiencies involved in the simpler predictors increase dramatically at certain extreme values of the autoregressive parameters. In Section 2 we specify the model. Section 3 describes the predictors considered, and their mean squared errors of prediction. The experimental design and corresponding numerical results relating to the relative prediction efficiencies are given in Section 4. Concluding comments are given in Section 5.