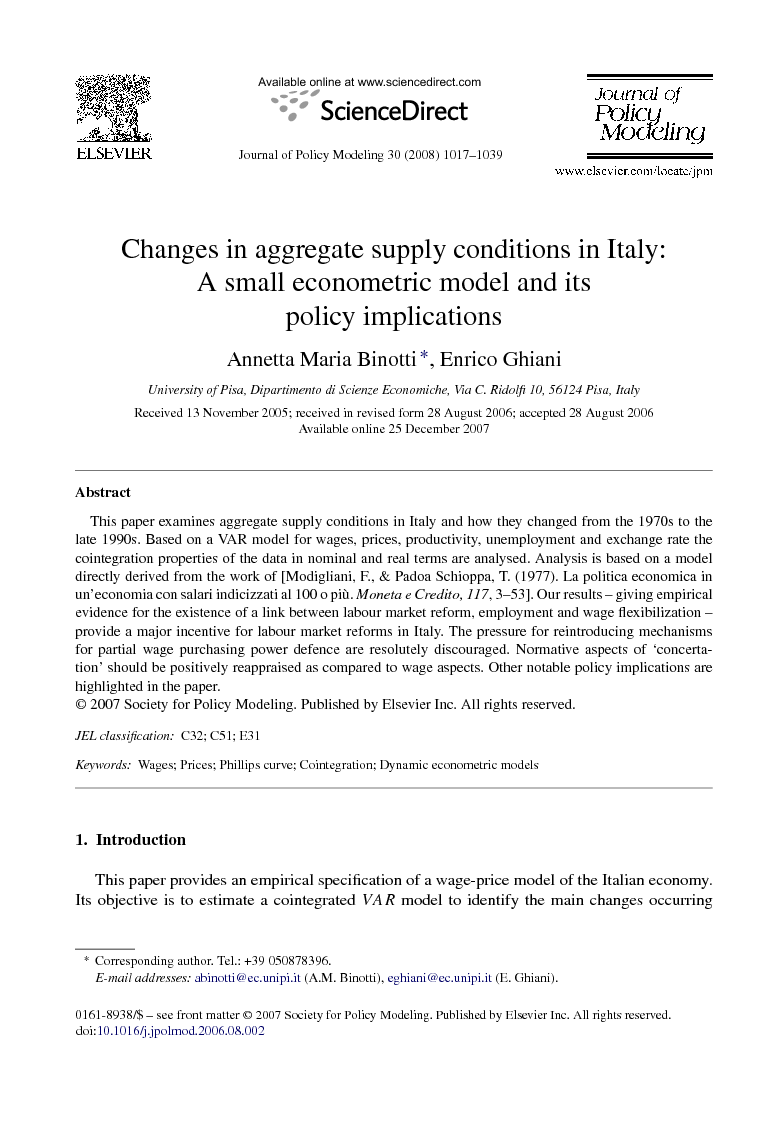 This paper examines aggregate supply conditions in Italy and how they changed from the 1970s to the late 1990s. Based on a VAR model for wages, prices, productivity, unemployment and exchange rate the cointegration properties of the data in nominal and real terms are analysed. Analysis is based on a model directly derived from the work of [Modigliani, F., & Padoa Schioppa, T. (1977). La politica economica in un’economia con salari indicizzati al 100 o più. Moneta e Credito, 117, 3–53]. Our results – giving empirical evidence for the existence of a link between labour market reform, employment and wage flexibilization – provide a major incentive for labour market reforms in Italy. The pressure for reintroducing mechanisms for partial wage purchasing power defence are resolutely discouraged. Normative aspects of ‘concertation’ should be positively reappraised as compared to wage aspects. Other notable policy implications are highlighted in the paper.

This paper provides an empirical specification of a wage-price model of the Italian economy. Its objective is to estimate a cointegrated VARVAR model to identify the main changes occurring in the aggregate supply conditions from the early 1970s to the late 1990s. We will investigate whether, during this time span, there were any changes in the characteristics of the static equations of the real demand and supply wage, and we will examine the set of possible dynamic responses indicated by the model. Two periods will be compared, prior and subsequent to the early 1980s, with very different supply systems1 due to: (a) changes in industrial relations and their effects on contract systems (gradual wage de-indexation), social legislation and industrial productivity; (b) progressive European integration and liberalization of the financial markets and the labour market, as well as changes in the exchange rate regime; finally, (c) oil countershocks. It is widely claimed in the literature that these changes exerted a positive effect on supply conditions, leading towards a reduction in equilibrium unemployment.2 Such an assessment is based on empirical studies which mainly analyse the characteristics of the static equilibrium equations;3 however, we will focus on the identification and theoretically consistent interpretation of dynamic mechanisms: the endogenous response of price and wage inflation, but also of unemployment, productivity and the real import price will be evaluated – within the framework of a ‘competing claims’ model – in the light of the theoretical model. Our findings, which highlight some elements of discontinuity between the two subperiods considered, show that the divergence is more pronounced than would appear from the static equations. Our analysis of the macroeconomic events of the period differs in some respects from that prevailing in the literature. For the 1970s the usual interpretation underlines the role of trade union-derived shocks on the supply wage, and that of oil shocks on the demand wage. We were unable to detect any role played by trade union variables, while the importance of real import prices emerged very clearly. However, this variable mainly exerted its effects on the supply wage (and therefore through wage resistance) rather than the demand wage. This appears to be more consistent with the behaviour of real wages and the wage share during the period examined. For the 1980s, the pattern of static equations is once again in line with the conventional picture, while dynamic analysis shows the emergence of endogenous responses to disequilibrium (productivity and unemployment), which were not present during the previous period. The empirical model presented in this paper also allows for an assessment of how the characteristics of the Phillips curve evolved during the three decades considered. It is thus possible to underscore the process whereby real wages were made increasingly flexible during the 1980s and 1990s. Our analysis assesses the macroeconomic results of the process of flexibilization first initiated in Italy in the 1980s and implemented through policies to deregulate labour relations. Evidence suggests that there is a link between labour market reform, employment and wage flexibilization policies and so encourages the implementation of the labour market reforms in Italy. In Section 2, we will introduce the theoretical model used as reference for our empirical analysis. This model is based on a well-known work by Modigliani and Padoa Schioppa (1977), which we adapted to the requirements of empirical testing. In Section 3, after a brief comment on the time series, we will introduce a VAR representation of the labour market model and we will use the cointegration approach to identify long-run equations among variables of interest. Finally, by applying the ‘general to specific’ strategy, we will draw up a model capable of describing the short-run dynamics and incorporating information regarding long-run equations. The main empirical results will be extensively discussed in Sections 4 and 5. Sections 6 and 7 provide, respectively, the policy implications of our empirical results and concluding remarks.

We have presented a small aggregate econometric model of the dynamics of money wages and prices for Italy, characterised by ‘distributive conflict’ and imperfect competition and directly derived from the work of Modigliani and Padoa Schioppa (1977). The objective of the analysis was to verify whether, over the span of time considered, there was an important change in Italy in aggregate supply conditions, and to examine the features of any such change. The analysis was developed within the class of cointegrated VARVAR models. The results of the empirical model find an immediate economic interpretation in the theoretical model used. Our analysis confirms the assumption that a major change took place in the Italian macroeconomic system at the beginning of the 1980s, chiefly in the conditions under which the labour market operated. The data reject the assumption that the same set of static relations applied for each of the two sub-periods studied. Furthermore, the picture of the endogenous responses to the disequilibrium of the different variables changes dramatically during the early 1980s. Our analysis leads to a reading of the macroeconomic events of the period that differs noticeably from the more consolidated analysis we find in the literature. For the 1970s, both the role of trade union shocks, as an element that affected the supply wage, and the effects of oil shocks on the demand wage are widely stressed. In our study, we were unable to highlight a role for trade union variables but emerged with evidence the role played by real import prices in the supply wage (wage resistance): the latter appears to have increased considerably due to the oil shocks, while the effects on the demand wage seem to have been negligible. This result seems to be more consistent with the behaviour of real wages and the wage share in the 1970s. The picture of the static relations presented in this work for the first period coincides with that drawn by Modigliani and Padoa Schioppa (1977). It is characterised by the rigidity of real wages and by the absence of an endogenous response of unemployment to the distributive disequilibrium. Unemployment takes on the features of an exogenous variable that can be modelled as a random walk. The rigidity scenario is completed by the absence of a dynamic adjustment of productivity to the disequilibrium. For the 1980s and 1990s, static relations show a return to the traditional picture, while the dynamic analysis shows the activation of endogenous responses of productivity and the unemployment rate that were not present in the previous years: labour market conditions (through the unemployment rate) once again became an important factor in determining real wages; the influence of the exchange rate on the labour market was considerably attenuated (due to the effect of de-indexation); and finally, the assumption of the neutrality of productivity is rejected (thus confirming the supposition that a slow but significant wage countershock may have arisen during the years in question). Analysis of the endogenous responses of unemployment and productivity suggests that, during the last two decades of the 20th century, major symptoms of macroeconomic flexibilization became manifest in the labour market. Signs indicating similar trends are drawn from the analysis of the Phillips curve, as the empirical results presented in our paper suggest that a cointegrating relation between inflation and unemployment (long-run Phillips curve) reappeared in Italy during the 1980s and 1990s, associated with a map of short-run Phillips curves characterised by the presence of an ECM. With regard to the changes in the degree of permissiveness of supply conditions for demand policies, the transition (during the 1980s) to a regime where the response of nominal magnitudes to disequilibrium was attenuated had the effect of extending the margins for an expansive role of monetary policies. The appearance of an endogenous response of productivity operated in the same direction. By contrast, the lower elasticity of wages to the exchange rate operated in the opposite direction. The greater elasticity of wages to unemployment accentuated the extent of the disequilibrium determined by a given increase in employment and therefore discouraged the use of expansive demand policies.