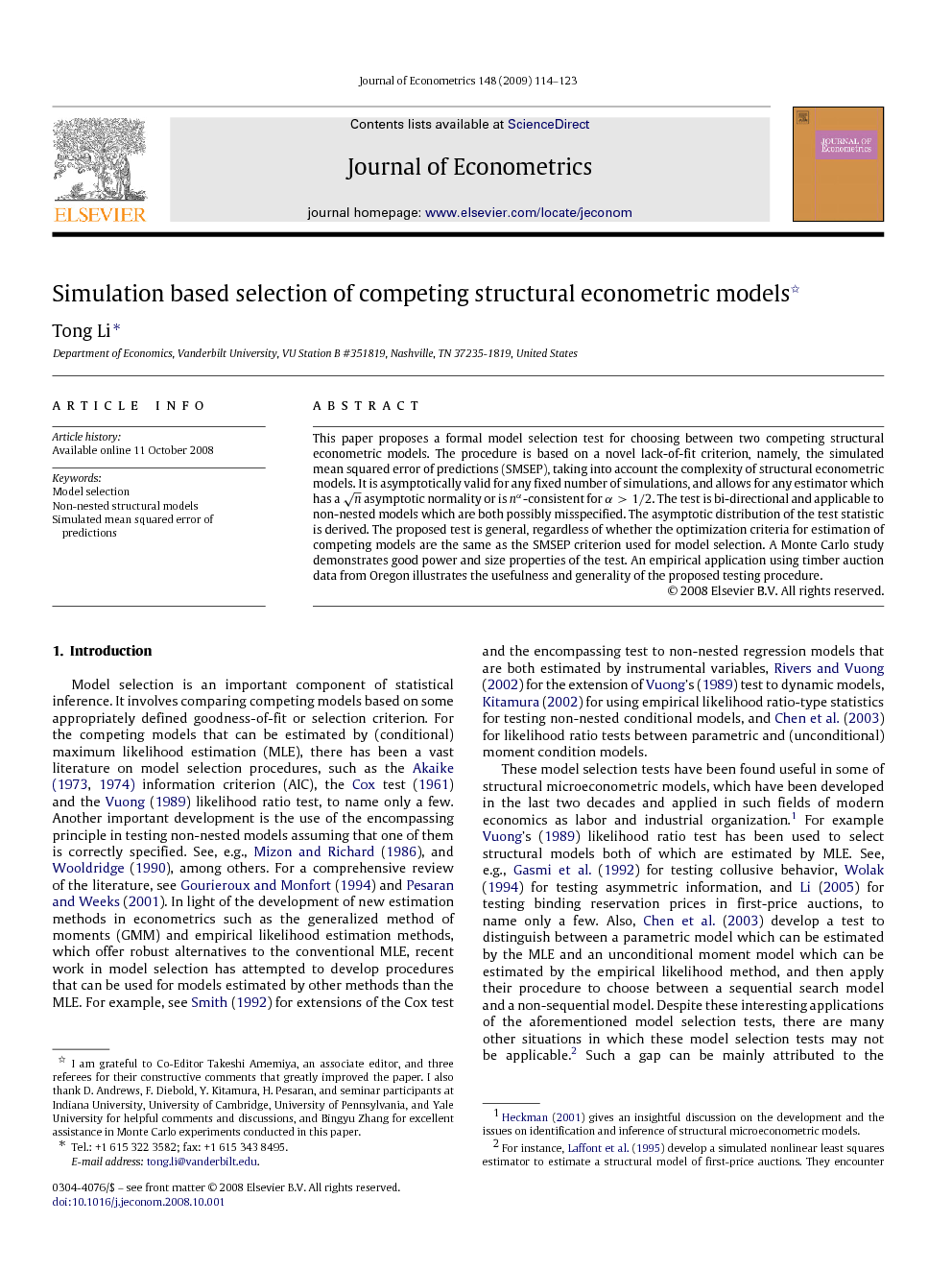 This paper proposes a formal model selection test for choosing between two competing structural econometric models. The procedure is based on a novel lack-of-fit criterion, namely, the simulated mean squared error of predictions (SMSEP), taking into account the complexity of structural econometric models. It is asymptotically valid for any fixed number of simulations, and allows for any estimator which has a View the MathML sourcen asymptotic normality or is nαnα-consistent for α>1/2α>1/2. The test is bi-directional and applicable to non-nested models which are both possibly misspecified. The asymptotic distribution of the test statistic is derived. The proposed test is general, regardless of whether the optimization criteria for estimation of competing models are the same as the SMSEP criterion used for model selection. A Monte Carlo study demonstrates good power and size properties of the test. An empirical application using timber auction data from Oregon illustrates the usefulness and generality of the proposed testing procedure.

This paper develops a general framework for testing between competing non-nested structural econometric models. Our method allows for any estimators that are either root-nn asymptotically normally distributed or consistent at a rate faster than root-nn, and can be used for distinguishing between two models that are both possibly misspecified. The statistical significance of the difference between two models under consideration is assessed through a simulation based lack-of-fit criterion, taking into account the complex nature of structural econometric models. As such, our approach provides a new model selection method for choosing between competing structural models. Our Monte Carlo studies demonstrate the good size and power properties of the test. We apply our testing procedure to determine the number of potential bidders in the timber auctions in Oregon. Such an application illustrates the usefulness and generality of our test, and also demonstrates the importance of developing model selection tests in structural econometric models. This paper has been focusing on selection of fully parametric structural models. While the results in the paper do not apply to nonparametric structural models, it is possible to extend them to the semiparametric framework provided that the conditional expectation of the dependent variable can be simulated with the structural parameter estimates. Also, as previously mentioned, this paper is motivated by the need to develop a general model selection test for structural models when the estimation methods used do not allow one to use the existing procedures. On the other hand, because of its generality, our proposed method can also be applied to the cases in which the existing model selection tests work as well. For instance, when two competing structural models are estimated by the MLE, we can use the Vuong (1989) likelihood ratio test as well as our test for model selection. Thus, it would be interesting in this case to compare the asymptotic properties of both tests as well as their finite sample performances. These are left for future research.