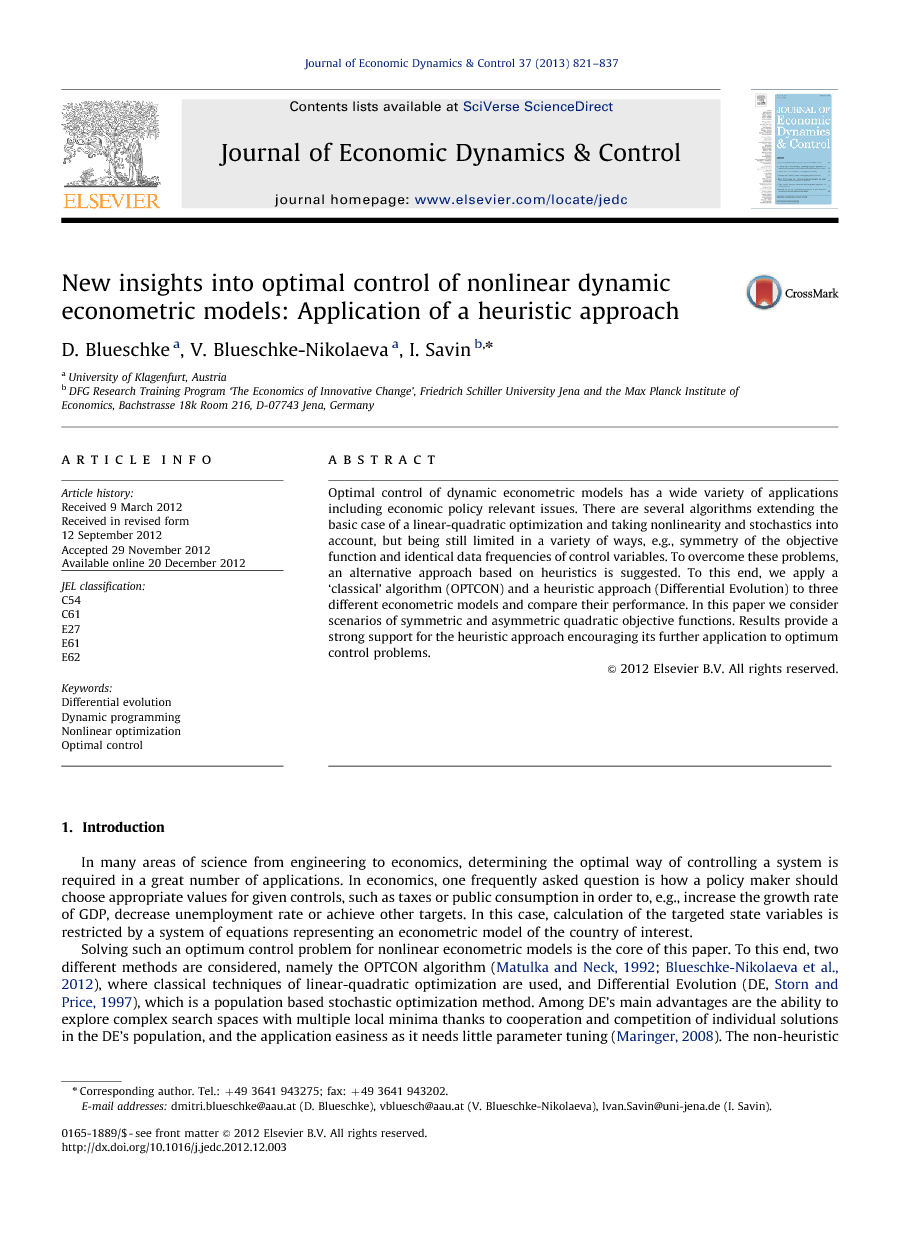 Optimal control of dynamic econometric models has a wide variety of applications including economic policy relevant issues. There are several algorithms extending the basic case of a linear-quadratic optimization and taking nonlinearity and stochastics into account, but being still limited in a variety of ways, e.g., symmetry of the objective function and identical data frequencies of control variables. To overcome these problems, an alternative approach based on heuristics is suggested. To this end, we apply a ‘classical’ algorithm (OPTCON) and a heuristic approach (Differential Evolution) to three different econometric models and compare their performance. In this paper we consider scenarios of symmetric and asymmetric quadratic objective functions. Results provide a strong support for the heuristic approach encouraging its further application to optimum control problems.

In many areas of science from engineering to economics, determining the optimal way of controlling a system is required in a great number of applications. In economics, one frequently asked question is how a policy maker should choose appropriate values for given controls, such as taxes or public consumption in order to, e.g., increase the growth rate of GDP, decrease unemployment rate or achieve other targets. In this case, calculation of the targeted state variables is restricted by a system of equations representing an econometric model of the country of interest. Solving such an optimum control problem for nonlinear econometric models is the core of this paper. To this end, two different methods are considered, namely the OPTCON algorithm (Matulka and Neck, 1992 and Blueschke-Nikolaeva et al., 2012), where classical techniques of linear-quadratic optimization are used, and Differential Evolution (DE, Storn and Price, 1997), which is a population based stochastic optimization method. Among DE's main advantages are the ability to explore complex search spaces with multiple local minima thanks to cooperation and competition of individual solutions in the DE's population, and the application easiness as it needs little parameter tuning (Maringer, 2008). The non-heuristic approach, the OPTCON algorithm, on the other hand, is a more reliable and fast instrument for solving optimum control problems in standard applications. However, like nearly all ‘classical’ methods, the OPTCON algorithm has several limitations. One, which is sometimes criticized in literature, is the required symmetry of the objective function. For the problems considered in this paper, the objective function is given in quadratic tracking form and equally penalizes positive and negative deviations from the given target values. In many situations, however, incorporation of different penalizing procedures for positive and negative deviations (in form of additional weighting coefficients) or inclusion of some indifference intervals would be desirable. Whereas it is nearly impossible to allow for this extension in the classic algorithm, it can be achieved by using a heuristic approach. Before approaching the case of an asymmetric objective function, one has to make sure that DE can deliver a ‘good’ solution to the basic case of an optimum control problem. To demonstrate this, DE and OPTCON are applied to three macroeconometric models (with a deterministic scenario) and the performance of the two strategies is compared. Both methods are implemented in Matlab 7.11 to simplify their comparison. Due to the stochastic nature of DE and resulting need for several restarts of the strategy, a higher computational time is expected. For this reason, several possibilities to increase DE computational efficiency are also discussed. Once the applicability of the heuristic approach has been demonstrated for the basic problem, it is extended and applied to solve the optimum control problem with an asymmetric objective function to three macroeconometric models. To this end, certain thresholds around the target values are introduced, inside which the objective function can be handled differently for positive and negative deviations. The resulting changes in the solutions are carefully analyzed and discussed both from the technical and economical perspectives. The paper proceeds as follows. In Section 2 we define the class of problems to be tackled by the algorithms and describe the limitations, which are present in the OPTCON algorithm and are typical for ‘classical’ optimization methods. Section 3 briefly reviews the OPTCON algorithm as a classical approach and introduces DE as an alternative heuristic strategy. In Section 4 we analyze simulation results obtained for the two approaches with symmetric objective functions and extend DE to the asymmetric objective function scenario, testing the two strategies based on three econometric models (SLOVNL, SLOPOL4 and SLOPOL8). Section 5 concludes with a summary of the main findings and an outlook to further research.