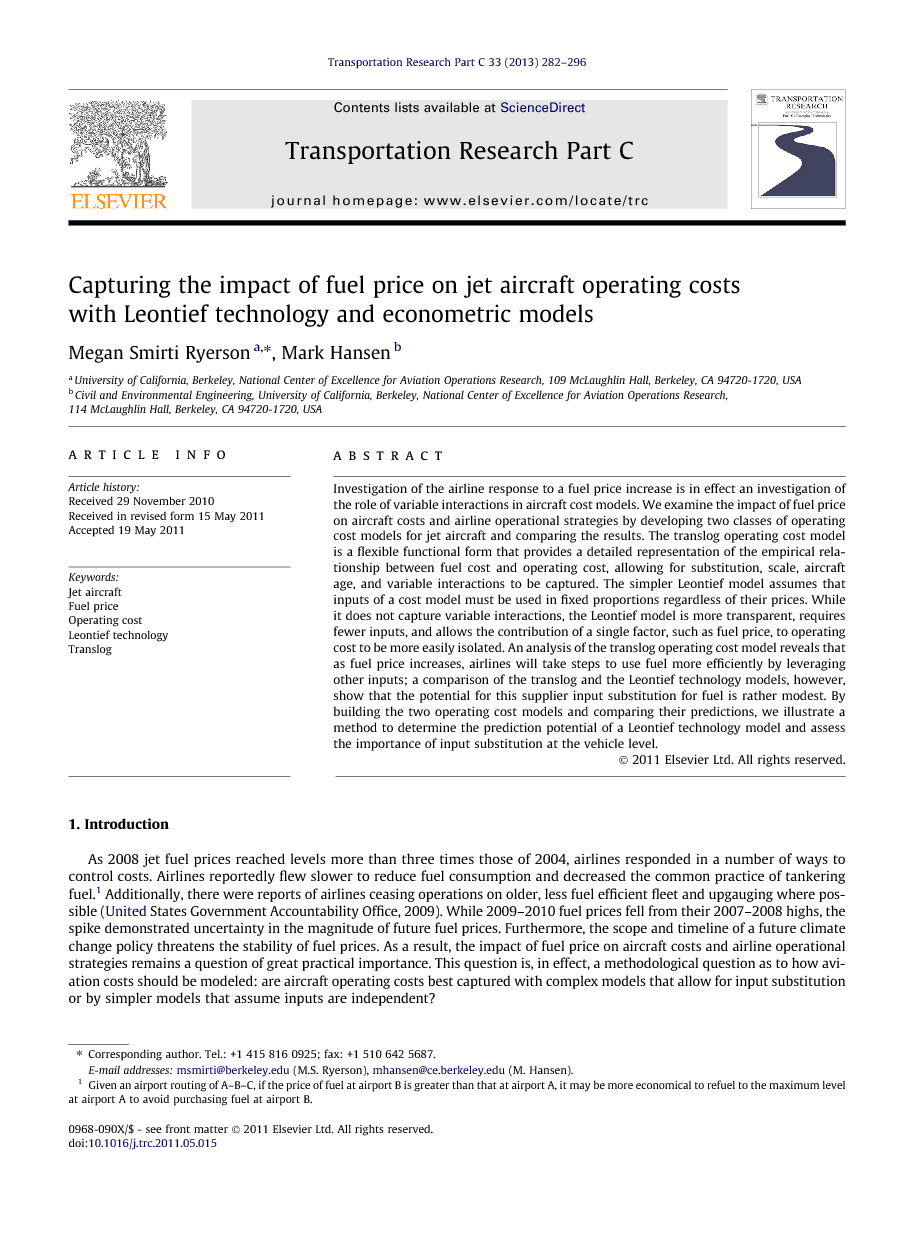 Investigation of the airline response to a fuel price increase is in effect an investigation of the role of variable interactions in aircraft cost models. We examine the impact of fuel price on aircraft costs and airline operational strategies by developing two classes of operating cost models for jet aircraft and comparing the results. The translog operating cost model is a flexible functional form that provides a detailed representation of the empirical relationship between fuel cost and operating cost, allowing for substitution, scale, aircraft age, and variable interactions to be captured. The simpler Leontief model assumes that inputs of a cost model must be used in fixed proportions regardless of their prices. While it does not capture variable interactions, the Leontief model is more transparent, requires fewer inputs, and allows the contribution of a single factor, such as fuel price, to operating cost to be more easily isolated. An analysis of the translog operating cost model reveals that as fuel price increases, airlines will take steps to use fuel more efficiently by leveraging other inputs; a comparison of the translog and the Leontief technology models, however, show that the potential for this supplier input substitution for fuel is rather modest. By building the two operating cost models and comparing their predictions, we illustrate a method to determine the prediction potential of a Leontief technology model and assess the importance of input substitution at the vehicle level.

As 2008 jet fuel prices reached levels more than three times those of 2004, airlines responded in a number of ways to control costs. Airlines reportedly flew slower to reduce fuel consumption and decreased the common practice of tankering fuel.1 Additionally, there were reports of airlines ceasing operations on older, less fuel efficient fleet and upgauging where possible (United States Government Accountability Office, 2009). While 2009–2010 fuel prices fell from their 2007–2008 highs, the spike demonstrated uncertainty in the magnitude of future fuel prices. Furthermore, the scope and timeline of a future climate change policy threatens the stability of fuel prices. As a result, the impact of fuel price on aircraft costs and airline operational strategies remains a question of great practical importance. This question is, in effect, a methodological question as to how aviation costs should be modeled: are aircraft operating costs best captured with complex models that allow for input substitution or by simpler models that assume inputs are independent? We address the aviation cost modeling tradeoff while examining the impact of fuel price on aircraft costs and airline operational strategies by developing two classes of operating cost models for jet aircraft and comparing the results. Using published airline data we develop the translog and the Leontief technology operating cost models. In developing the translog model, we seek to both update and improve upon the translog econometric operating cost model for jet aircraft developed by Wei and Hansen (2003) and to consider in more detail the effect of fuel price. In improving on the model, we use econometric methods that account for correlation across airlines, aircraft, and time. We also estimate on a larger and more up-to-date data set, which includes a broader range of aircraft types and explanatory variables. The translog model developed in this study provides the most complete representation of the empirical relationship between fuel cost and operating cost, allowing for substitution, scale, aircraft age, and other effects – including interactions – to be captured. It can also be used to model the impact of fuel price on the aircraft size that minimizes operating cost; however, the detailed nature of the translog model (hereafter, TM) makes it challenging to gain immediate insights and to predict future operating costs. The simpler Leontief model is more transparent, requires fewer inputs, and allows the contribution of a single factor, such as fuel price, to operating cost to be more easily isolated. The Leontief technology cost models (hereafter, LM) developed in Ryerson and Hansen (2010) assume that inputs of a cost model, such as labor, fuel, and materials, must be used in fixed proportions regardless of their prices. Because the inputs are assumed to be in fixed proportions, these models are specific to an aircraft type. This produces a set of models rather than a single, generalized model. The development of the TM and LM and comparison of their predictions allows us to investigate the importance of the interaction effects the translog uniquely captures. The results of this investigation will inform the tradeoff between a complicated but flexible cost model and a simpler but highly restrictive one as well as shed light on airline behavior due to a fuel price increase. The remainder of this paper is organized as follows: The following sections review the modeling approach (Section 2) and the data collected for the development of the translog model (Section 3). Regularity conditions of the estimated TM are explored in Section 4, and coefficient estimates are presented and interpreted based on the objective of the study. In Section 5, predictions from the translog model and LM are compared, and conclusions are drawn in Section 6.

In this paper we develop two empirical operating cost models for jet aircraft based on a similar data set. In developing the translog model, we establish a detailed portrait of the relationship between aircraft operating cost and the variables that influence cost. We find relationships between seat capacity, fuel price, and other key variables not documented in previous literature. However, we find that the simpler Leontief technology functional form yields predictions of operating costs that are similar to the predictions of the TM. Through the comparison of the LM, which assumes the mix of inputs required to operate a given air vehicle is insensitive to factor price, and the translog operating cost model, we establish the limited role of airline input substitution in managing fuel-related cost. The implication is that, while airlines may substitute inputs such as labor for fuel, the potential to reduce fuel consumption from this practice is minimal. This finding points to fuel consumption reduction largely coming from upgauging and new and advanced technologies. By building the two models and comparing their predictions, we illustrate a method to determine the prediction potential of a Leontief technology model and assess the importance of input substitution at the vehicle level. We find a model without variable interactions, the LM, is able to predict operating costs accurately while also maintaining other desirable properties including transparency, few inputs, and ease of prediction. While the translog and Leontief technology models play an important role in aviation cost modeling, this study suggests that use of the Leontief technology model is unavoidable for tractability.