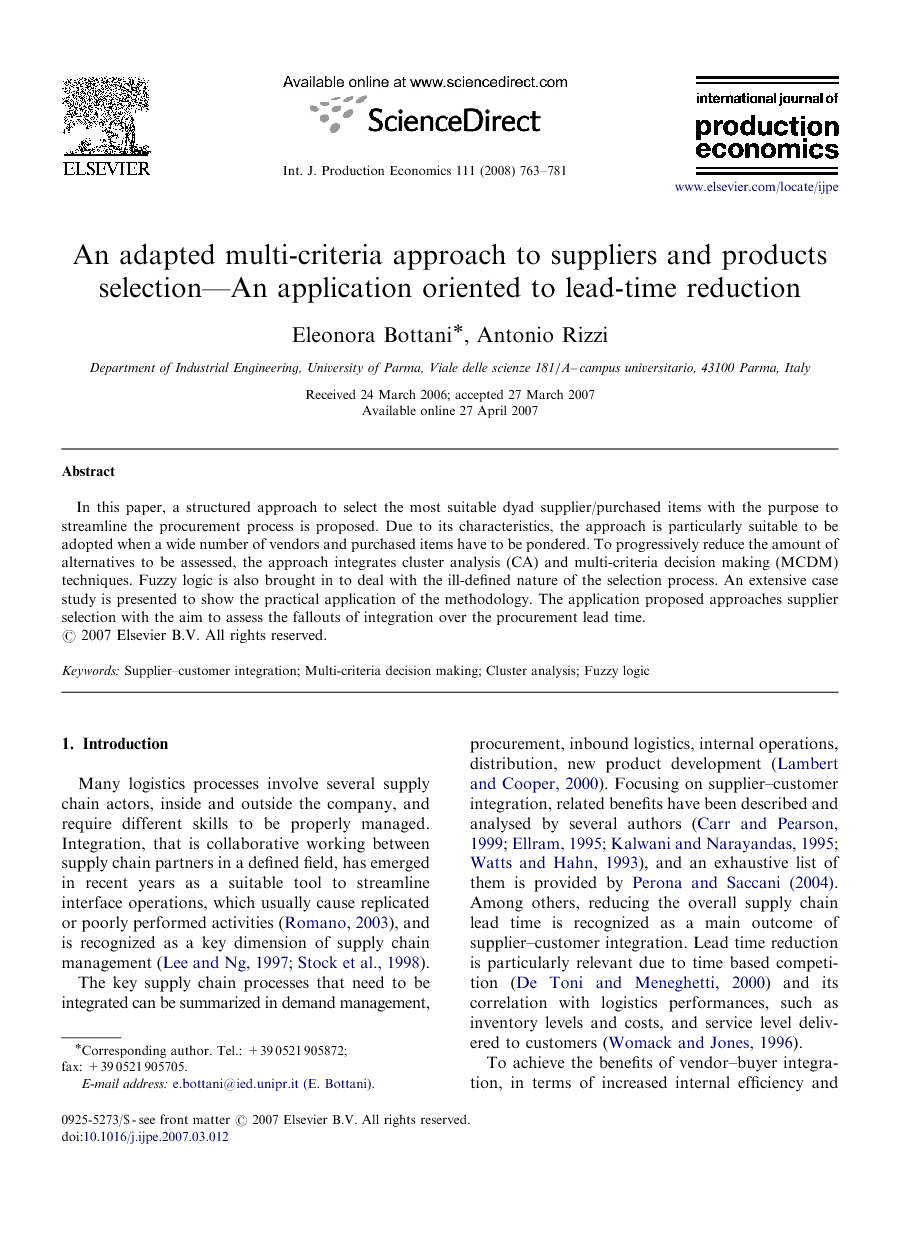 In this paper, a structured approach to select the most suitable dyad supplier/purchased items with the purpose to streamline the procurement process is proposed. Due to its characteristics, the approach is particularly suitable to be adopted when a wide number of vendors and purchased items have to be pondered. To progressively reduce the amount of alternatives to be assessed, the approach integrates cluster analysis (CA) and multi-criteria decision making (MCDM) techniques. Fuzzy logic is also brought in to deal with the ill-defined nature of the selection process. An extensive case study is presented to show the practical application of the methodology. The application proposed approaches supplier selection with the aim to assess the fallouts of integration over the procurement lead time.

Many logistics processes involve several supply chain actors, inside and outside the company, and require different skills to be properly managed. Integration, that is collaborative working between supply chain partners in a defined field, has emerged in recent years as a suitable tool to streamline interface operations, which usually cause replicated or poorly performed activities (Romano, 2003), and is recognized as a key dimension of supply chain management (Lee and Ng, 1997; Stock et al., 1998). The key supply chain processes that need to be integrated can be summarized in demand management, procurement, inbound logistics, internal operations, distribution, new product development (Lambert and Cooper, 2000). Focusing on supplier–customer integration, related benefits have been described and analysed by several authors (Carr and Pearson, 1999; Ellram, 1995; Kalwani and Narayandas, 1995; Watts and Hahn, 1993), and an exhaustive list of them is provided by Perona and Saccani (2004). Among others, reducing the overall supply chain lead time is recognized as a main outcome of supplier–customer integration. Lead time reduction is particularly relevant due to time based competition (De Toni and Meneghetti, 2000) and its correlation with logistics performances, such as inventory levels and costs, and service level delivered to customers (Womack and Jones, 1996). To achieve the benefits of vendor–buyer integration, in terms of increased internal efficiency and profitability of both players (Davis, 1993), identifying and selecting viable suppliers is a preliminary step to be properly managed (Carter et al., 1998). Moreover, once viable candidates have been chosen, further analyses may be required to determine which purchased items are appropriate for the practical implementation of collaborative processes (i.e. standard items vs customized ones) (Mukhopadhyay and Kekre, 2002). Based on these premises, this paper focuses on suppliers/items selection, and contributes to the literature addressing two specific issues, which are detailed in the following. (i) The main contribution of the paper has to be found in the methodological approach proposed, which enables to deal with selecting suppliers/items when a large number of alternatives has to be evaluated. Multi-criteria decision making (MCDM) methods have been successfully adopted in literature to deal with supplier selection issues (Nydick and Hill, 1992; Masella and Rangone, 2000; Morlacchi, 1999; Petroni and Braglia, 2000; Dulmin and Mininno, 2003; Chen et al., 2006; Amid et al., 2006; Araz and Ozkarahan, 2007). However, researchers have pointed out that these methods cannot be directly applied to assess a large number of alternatives, since they tend to generate inconsistencies (Zanakis et al., 1998). To cope with this issue, the approach developed exploits the combined application of MCDM methods and clusters analysis (CA), which allows reducing the problem dimension by grouping objects based on their similarities. Analytic hierarchy process (AHP) (Saaty, 1980 and Saaty, 1994) is adopted in the methodology proposed, since it has been widely and successfully adopted for supplier selection (Liu and Hai, 2005). Fuzzy logic is also used to address the vagueness of human thoughts in the selection process. (ii) Moreover, we propose an extensive the case study where the approach developed is applied with the aim of selecting the most suitable dyad supplier/purchased item within a company which is planning to set up a streamlined procurement program. Hence, the selection process described is oriented to reducing lead time and the overall cost of the procurement process. Supplier selection is not a new issue in logistics literature; however, it has been usually addressed under a general perspective, while its fallouts over the procurement lead time have not been investigated. Moreover, although the removal of invaluable or duplicated activities emerges as a distinctive characteristic of integrated vendor–buyer relationships (De Treville et al., 2004), few papers discuss how supplier selection can affect the procurement lead time. Conversely, researchers have focused on vendor–buyer cooperation to improve inventory control and performance (Zhang et al., 2007) and or features that should characterize suppliers for long term, win to win, partnerships (Kahraman et al., 2003; De Maio and Maggiore, 1992; Ellram, 1990; Kopczak, 1997; Simchi-Levi et al., 2000; Chang et al., 2006). A further contribution of the paper can thus be found in the definition of criteria for the assessment of suppliers and items with the purpose of reducing the procurement lead time. The paper is structured as follows. In the next section, the approach developed is presented. The methodology follows a 6-steps procedure, where CA and AHP are sequentially used to group and rank alternatives, namely suppliers and purchased items. We provide a detailed description of steps 1–3, which refer to suppliers evaluation, and briefly illustrate how the same approach can be used on items in steps 4–6. Next, the case study is presented to show the application of the methodology to a real industrial problem. Results of the application are finally presented and discussed.

The structured approach presented in this paper allows overcoming two practical hurdles of suppliers/items selection process. First, it allows dealing with a wide number of elements, while traditional MCDM methods are cumbersome to be directly applied to evaluate and rank numerous alternatives. To address this issue, the approach exploits Analytic Hierarchy Process (AHP) and Cluster Analysis (CA), allowing to progressively reduce the amount of alternatives to be assessed and to apply AHP for the selection of the most suitable clusters. Second, by exploiting fuzzy logic, the selection process properly considers the vagueness of judgements stemming from the human way of reasoning. To test its applicability and consistency, the approach has been exploited in a real case, referring to a firm operating in the beverage bottling, which had to select both suppliers and purchased items for the application of a new receiving process for components and raw materials. Through the case study, the approach addresses the issue of supplier/items selection for the purpose of applying streamlined procurement processes. By comparing the results obtained with firm's expectations, the approach emerges as appropriate for the problem in exam, since it allowed the selection of 18 suppliers out of 92 and 2113 items out of about 13,800. Starting from the work developed, two main future research directions can be found; they are detailed in the following. (i) Additional research is required to develop a comprehensive scaffold for suppliers/items selection to streamline the procurement process, encompassing the industry field, the production systems (ETO, ATO and MTO, or MTS) and other relevant features. Our work has only partially deal with this point by providing, in the case study section, some viable criteria that can be adopted to this extent. (ii) Moreover, providing a quantitative assessment of the performance of supplier–customer integration, in terms of expected reduction of procurement lead time, is a further research direction. Having proposed a case study of supplier selection oriented to lead time reduction, the work presented in this paper has represented a preliminary step in this regard.