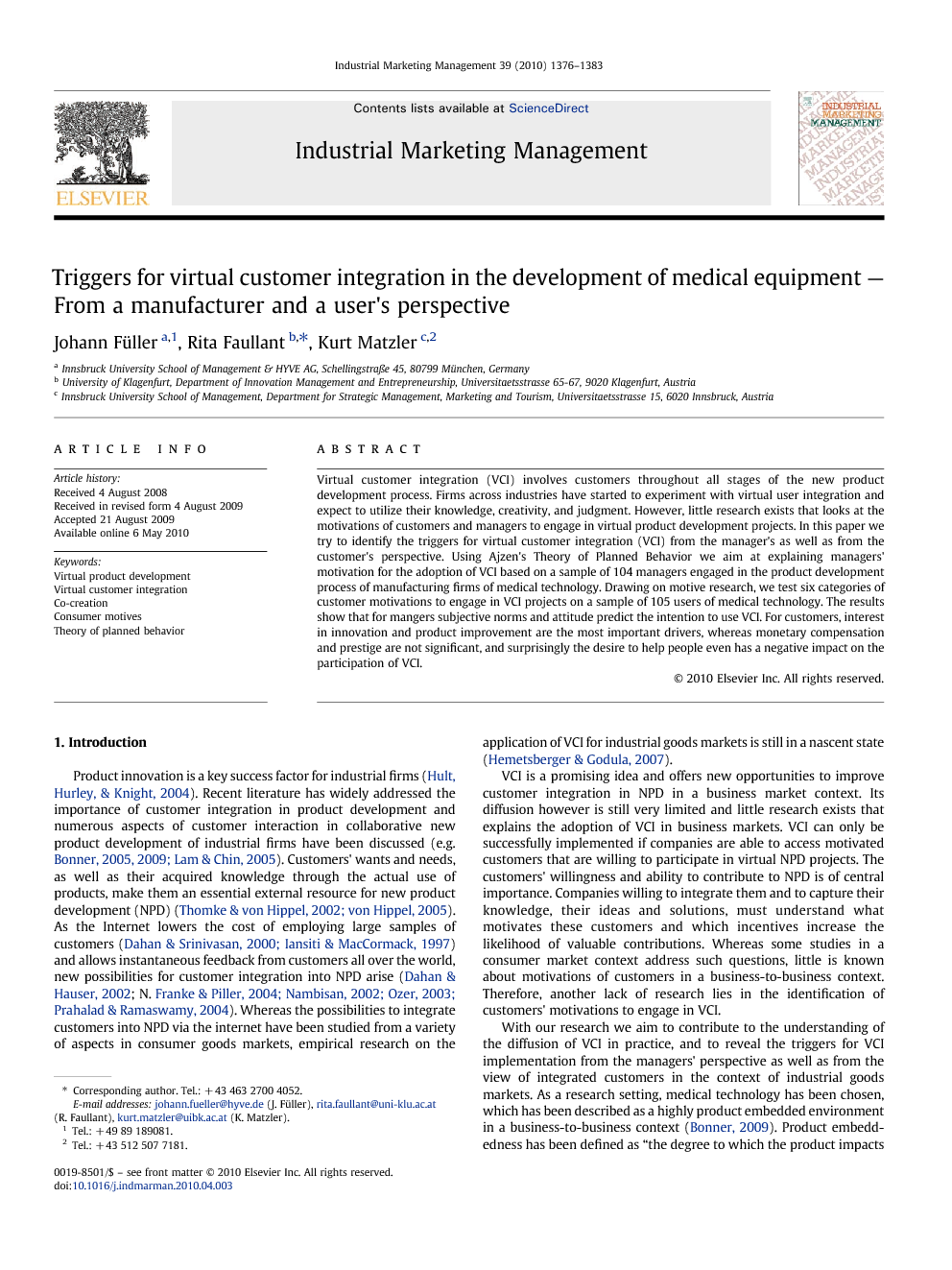 Virtual customer integration (VCI) involves customers throughout all stages of the new product development process. Firms across industries have started to experiment with virtual user integration and expect to utilize their knowledge, creativity, and judgment. However, little research exists that looks at the motivations of customers and managers to engage in virtual product development projects. In this paper we try to identify the triggers for virtual customer integration (VCI) from the manager's as well as from the customer's perspective. Using Ajzen's Theory of Planned Behavior we aim at explaining managers' motivation for the adoption of VCI based on a sample of 104 managers engaged in the product development process of manufacturing firms of medical technology. Drawing on motive research, we test six categories of customer motivations to engage in VCI projects on a sample of 105 users of medical technology. The results show that for mangers subjective norms and attitude predict the intention to use VCI. For customers, interest in innovation and product improvement are the most important drivers, whereas monetary compensation and prestige are not significant, and surprisingly the desire to help people even has a negative impact on the participation of VCI.

Product innovation is a key success factor for industrial firms (Hult, Hurley, & Knight, 2004). Recent literature has widely addressed the importance of customer integration in product development and numerous aspects of customer interaction in collaborative new product development of industrial firms have been discussed (e.g. Bonner, 2005, Bonner, 2009 and Lam and Chin, 2005). Customers' wants and needs, as well as their acquired knowledge through the actual use of products, make them an essential external resource for new product development (NPD) (Thomke and von Hippel, 2002 and von Hippel, 2005). As the Internet lowers the cost of employing large samples of customers (Dahan and Srinivasan, 2000 and Iansiti and MacCormack, 1997) and allows instantaneous feedback from customers all over the world, new possibilities for customer integration into NPD arise (Dahan & Hauser, 2002; N. Franke and Piller, 2004, Nambisan, 2002, Ozer, 2003 and Prahalad and Ramaswamy, 2004). Whereas the possibilities to integrate customers into NPD via the internet have been studied from a variety of aspects in consumer goods markets, empirical research on the application of VCI for industrial goods markets is still in a nascent state (Hemetsberger & Godula, 2007). VCI is a promising idea and offers new opportunities to improve customer integration in NPD in a business market context. Its diffusion however is still very limited and little research exists that explains the adoption of VCI in business markets. VCI can only be successfully implemented if companies are able to access motivated customers that are willing to participate in virtual NPD projects. The customers' willingness and ability to contribute to NPD is of central importance. Companies willing to integrate them and to capture their knowledge, their ideas and solutions, must understand what motivates these customers and which incentives increase the likelihood of valuable contributions. Whereas some studies in a consumer market context address such questions, little is known about motivations of customers in a business-to-business context. Therefore, another lack of research lies in the identification of customers' motivations to engage in VCI. With our research we aim to contribute to the understanding of the diffusion of VCI in practice, and to reveal the triggers for VCI implementation from the managers' perspective as well as from the view of integrated customers in the context of industrial goods markets. As a research setting, medical technology has been chosen, which has been described as a highly product embedded environment in a business-to-business context (Bonner, 2009). Product embeddedness has been defined as “the degree to which the product impacts how customers perform important functions, influences significant customer processes, requires customer effort in learning the product, creates customer dependencies on the product, and influences customers' policies and procedures” (Bonner, 2009, p 4). The contribution of this paper is threefold. First, as one of the first studies to do so, we quantitatively test customers' motivations to participate in a VCI project of NPD in a highly product embedded business-to-business context. The results show that in the business-to-business context it is also not the monetary reward but intrinsic motives that are the primary triggers leading customers to contribute. Second, we study the managers' intentions to introduce VCI in their firms by applying Ajzen's Theory of Planned Behavior (TPB) (Ajzen, 1991). A third contribution lies in the extension of TPB and motive research on virtual customer integration to a new context, thereby expanding the theory to a new domain.