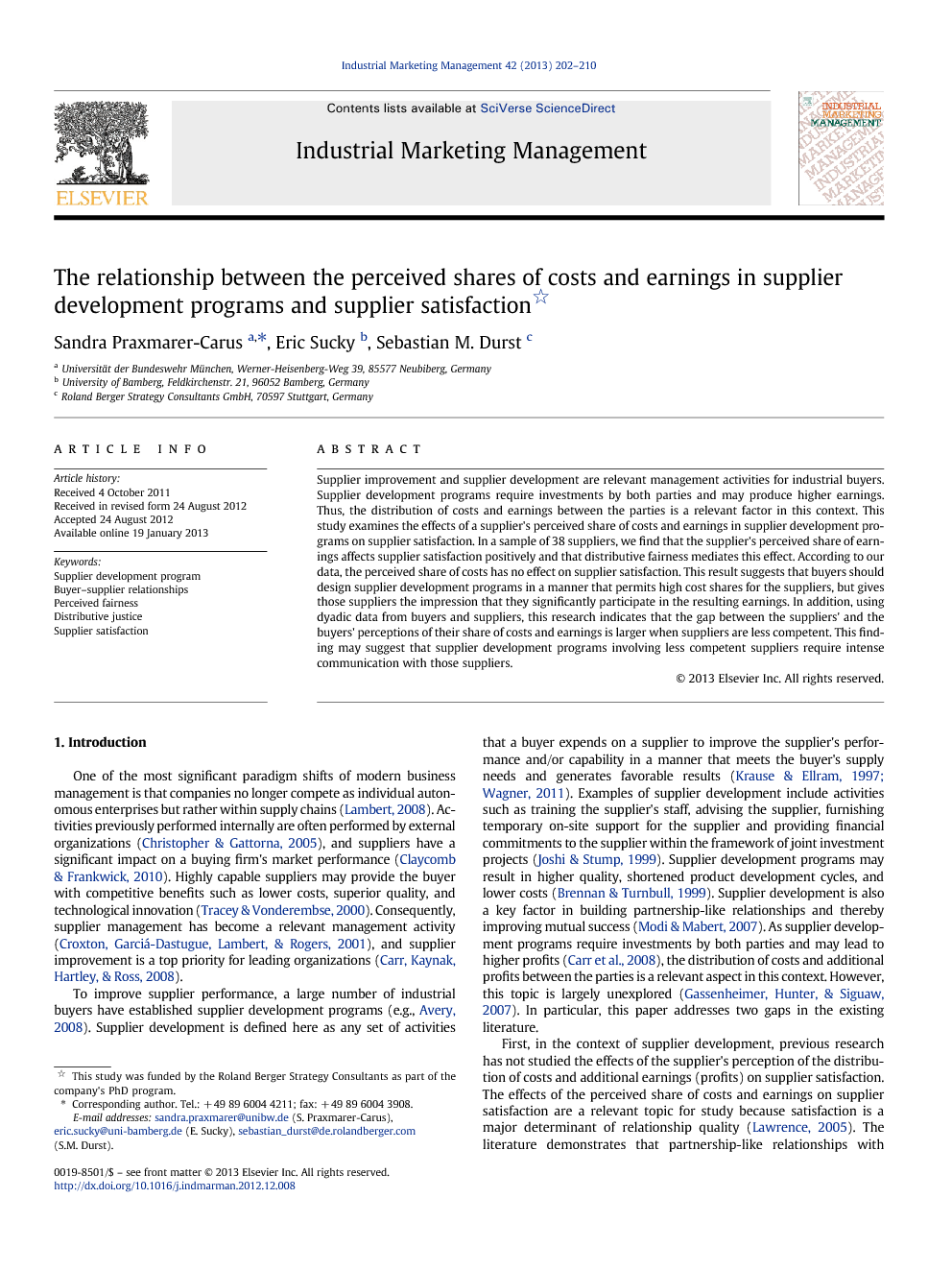 One of the most significant paradigm shifts of modern business management is that companies no longer compete as individual autonomous enterprises but rather within supply chains (Lambert, 2008). Activities previously performed internally are often performed by external organizations (Christopher & Gattorna, 2005), and suppliers have a significant impact on a buying firm's market performance (Claycomb & Frankwick, 2010). Highly capable suppliers may provide the buyer with competitive benefits such as lower costs, superior quality, and technological innovation (Tracey & Vonderembse, 2000). Consequently, supplier management has become a relevant management activity (Croxton, Garciá-Dastugue, Lambert, & Rogers, 2001), and supplier improvement is a top priority for leading organizations (Carr, Kaynak, Hartley, & Ross, 2008). To improve supplier performance, a large number of industrial buyers have established supplier development programs (e.g., Avery, 2008). Supplier development is defined here as any set of activities that a buyer expends on a supplier to improve the supplier's performance and/or capability in a manner that meets the buyer's supply needs and generates favorable results (Krause and Ellram, 1997 and Wagner, 2011). Examples of supplier development include activities such as training the supplier's staff, advising the supplier, furnishing temporary on-site support for the supplier and providing financial commitments to the supplier within the framework of joint investment projects (Joshi & Stump, 1999). Supplier development programs may result in higher quality, shortened product development cycles, and lower costs (Brennan & Turnbull, 1999). Supplier development is also a key factor in building partnership-like relationships and thereby improving mutual success (Modi & Mabert, 2007). As supplier development programs require investments by both parties and may lead to higher profits (Carr et al., 2008), the distribution of costs and additional profits between the parties is a relevant aspect in this context. However, this topic is largely unexplored (Gassenheimer, Hunter, & Siguaw, 2007). In particular, this paper addresses two gaps in the existing literature. First, in the context of supplier development, previous research has not studied the effects of the supplier's perception of the distribution of costs and additional earnings (profits) on supplier satisfaction. The effects of the perceived share of costs and earnings on supplier satisfaction are a relevant topic for study because satisfaction is a major determinant of relationship quality (Lawrence, 2005). The literature demonstrates that partnership-like relationships with suppliers improve the buying firm's performance (Liedtka, 1996 and Noordewier et al., 1990). In addition, the supplier's satisfaction determines the firm's long-term orientation and commitment (Gladstein, 1984 and Palmatier et al., 2006) and may also contribute to the buyer's reputation among other suppliers and customers (Griffith et al., 2006, Palmatier et al., 2006 and Wagner et al., 2011). The current paper studies the effects of a supplier's perceived share of costs and earnings in supplier development programs on supplier satisfaction. Furthermore, we analyze whether the perceived share of earnings has a stronger effect on perceived distributive fairness than the perceived share of costs. This comparative analysis may help buyers to construct their supplier development programs in a manner that improves suppliers' satisfaction. The study uses data from 38 suppliers to test the related hypotheses. Second, previous studies have not compared buyers' and suppliers' perceptions of their respective share of costs and earnings using dyadic data. However, such potential perception gaps are relevant for investigation because they provide sources for misunderstandings that can lead to the dissatisfaction of a partner and the consequent termination of the business relationship by that partner. A consistent perception is, for instance, when both partners indicate that the supplier accounts for 60% of the program's costs. An inconsistent perception occurs when the buyer and the supplier both perceive that they incur 60% of the costs. The current study analyzes asymmetries in buyers' and suppliers' perceptions of their shares of costs and earnings in supplier development programs and tests whether perception gaps depend on supplier competence. It is relevant to identify factors that may contribute to smaller or larger perception gaps, as such knowledge may enable buyers to anticipate potential problems related to perceived distributive fairness. The study uses buyers' and suppliers' dyadic perceptions (38 data pairs) to test hypotheses related to perception gaps. The structure of this paper is as follows. Section 2 introduces supplier development programs. In Section 3, the paper discusses the effects of the perceived share of costs and earnings on supplier satisfaction and presents the hypotheses H1 through H3. Then, in Section 4, the paper discusses potential perception gaps regarding the sharing of costs and earnings as perceived by the buyer and the supplier (hypotheses H4a and H4b). 5 and 6 present the empirical study testing our hypotheses. Section 7 discusses the findings and Section 8 discusses limitations of the study and suggests avenues for future research.