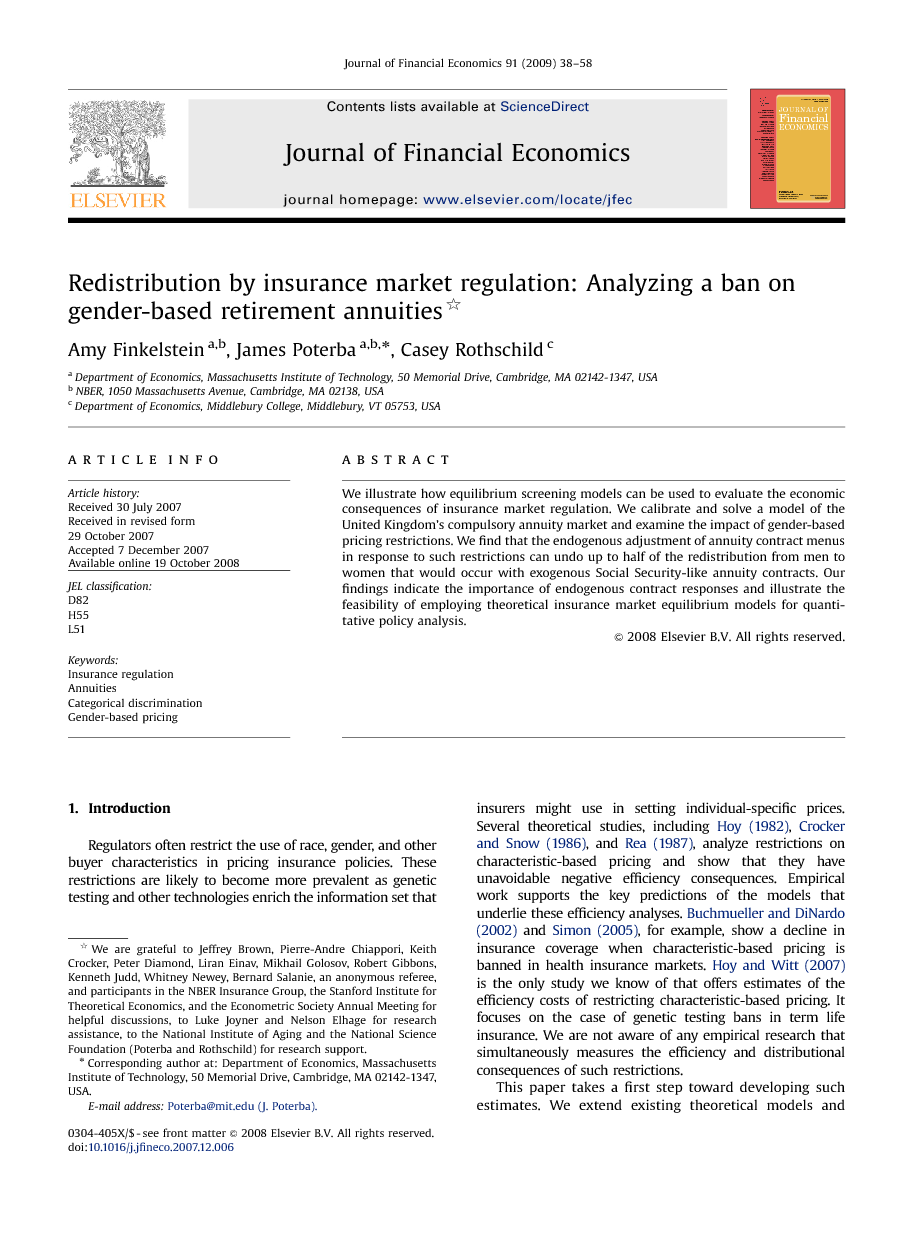 We illustrate how equilibrium screening models can be used to evaluate the economic consequences of insurance market regulation. We calibrate and solve a model of the United Kingdom's compulsory annuity market and examine the impact of gender-based pricing restrictions. We find that the endogenous adjustment of annuity contract menus in response to such restrictions can undo up to half of the redistribution from men to women that would occur with exogenous Social Security-like annuity contracts. Our findings indicate the importance of endogenous contract responses and illustrate the feasibility of employing theoretical insurance market equilibrium models for quantitative policy analysis.

This paper employs a model of insurance market equilibrium in the presence of asymmetric information to study the efficiency costs and the redistributive effects of regulations that restrict the set of individual characteristics that can be used in pricing insurance contracts. It moves beyond the qualitative observation that such regulations may entail efficiency costs to explore the quantitative effects of such policies. We develop, calibrate, and solve an equilibrium insurance contracting model for the United Kingdom's compulsory retirement annuity market. While our model does not fully capture this market's institutional features, it suggests the power of using equilibrium models in applied policy analysis. Our findings underscore the importance of considering the endogenous response of insurance contracts to regulatory restrictions. Recognizing that insurers can vary the menu of contracts they offer may reduce estimates of the amount of redistribution from men to women under a ban on gender-based pricing by as much as 50%. The redistribution associated with a unisex pricing requirement, even accounting for the endogenous contract response, is substantial. Our baseline estimates suggest that at least 3.4% of retirement wealth is redistributed from men to women. In contrast, we find only modest efficiency costs of a requirement for unisex pricing in the compulsory annuity market. We suspect that this finding would not generalize to other settings in which insurance market participation is voluntary, and in which some consumers might choose not to participate in the market after various regulations were imposed. Our analysis offers a starting point for comparing the consequences of unisex pricing in government provided social insurance programs with mandatory participation and no choice over annuity contract, such as the U.S. Social Security system, with the consequences of unisex pricing requirements in annuity markets with mandatory participation but choice over privately-supplied annuitant contracts, as in our U.K. setting. Our analysis, however, does not consider any of the potential long-run behavioral responses to a ban on gender-based annuity pricing. For example, a change in annuity pricing could affect the savings and labor supply decisions of those who will subsequently face compulsory annuitization requirements. Changes on these margins might affect our efficiency cost analysis. Annuity companies might also respond to unisex pricing requirements by conditioning annuity prices on observables that are not currently used in pricing, such as occupation or residential location. These characteristics might in turn adjust endogenously to the pricing, with resultant efficiency consequences. These are all important directions for further theoretical and empirical work. Restrictions on gender-based pricing of retirement annuities are just one of many examples of regulatory constraints on insurance pricing. In the United States, for example, where insurance is regulated at the state level, there are many restrictions on the information set insurers may use in setting automobile insurance prices. Blackmon and Zeckhauser's (1991) analysis of automobile insurance in Massachusetts raises issues similar to those in the current paper in a different context, although it does not explore how the menu of policy offerings might respond to regulation. Insurers also face restrictions in the markets for homeowner's insurance and small-group and non-group health insurance. The growing field of medical and genetic testing promises to create new tensions between insurers and regulators, as medical science provides new information that insurers could potentially use to predict the future morbidity and mortality of life and health insurance buyers. Our framework provides a natural starting point for evaluating the efficiency and distributional consequences of restrictions on characteristic-based pricing in a range of insurance markets more generally. A convincing analysis in these other settings will require attention to issues that we have not confronted in the compulsory annuity market. Analyzing the role of choice on the extensive margin of whether or not to purchase insurance is a key issue. In addition, while moral hazard is likely to be relatively unimportant in the annuity market, it may be pronounced in the automobile or health insurance market. Moral hazard effects need to be considered in analyzing the efficiency consequences of regulations. Finally, the use of insurance market regulations to redistribute among various population groups raises interesting questions that range far beyond our study. These include why a society might wish to carry out transfers between men and women, or between other groups, the extent to which transfers in insurance markets are simply undone by other transfers within the household or in the private sector, and why insurance markets rather than, say, the tax system, are a natural locus for such transfers. These issues warrant discussion and research.