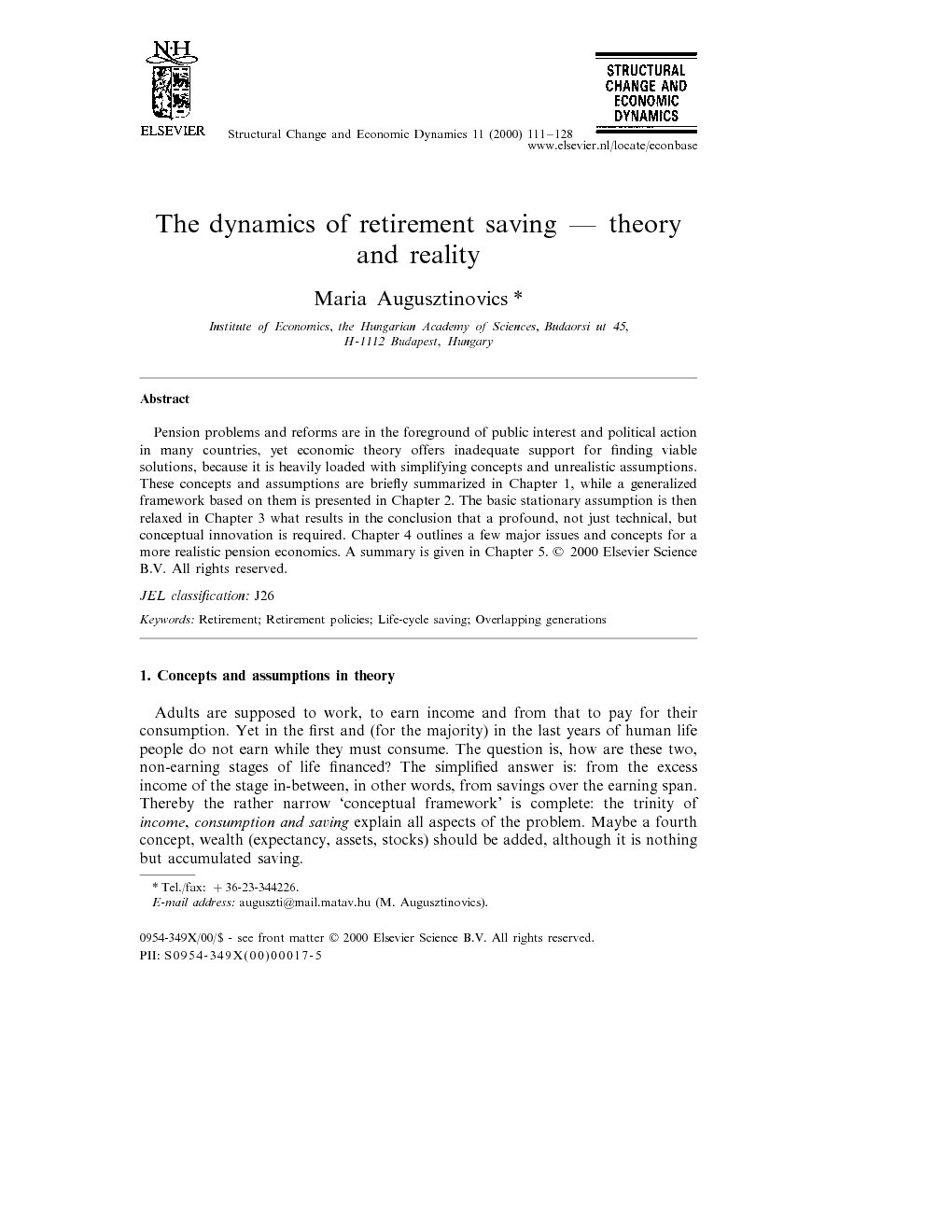 Pension problems and reforms are in the foreground of public interest and political action in many countries, yet economic theory offers inadequate support for finding viable solutions, because it is heavily loaded with simplifying concepts and unrealistic assumptions. These concepts and assumptions are briefly summarized in Chapter 1, while a generalized framework based on them is presented in Chapter 2. The basic stationary assumption is then relaxed in Chapter 3 what results in the conclusion that a profound, not just technical, but conceptual innovation is required. Chapter 4 outlines a few major issues and concepts for a more realistic pension economics. A summary is given in Chapter 5.

Adults are supposed to work, to earn income and from that to pay for their consumption. Yet in the first and (for the majority) in the last years of human life people do not earn while they must consume. The question is, how are these two, non-earning stages of life financed? The simplified answer is: from the excess income of the stage in-between, in other words, from savings over the earning span. Thereby the rather narrow ‘conceptual framework’ is complete: the trinity of income, consumption and saving explain all aspects of the problem. Maybe a fourth concept, wealth (expectancy, assets, stocks) should be added, although it is nothing but accumulated saving. The problem, by definition, is cross-sectional as well as longitudinal. In any given moment, the young (children), the earners and the elderly (pensioners) live together in human society. On the other hand, all cohorts (generations, surviving individuals) proceed through these three stages of life with the passing of time. It is extremely difficult, however, to handle cross-sectional and longitudinal aspects simultaneously. Theory needs a simplifying assumption: the ‘stationary population’ where all cohorts go through identical life-paths. Sometimes the assumption is quite crude: all individuals are supposed to work for N years and live M years thereafter. Sometimes the approach is more subtle, for example the probability of dying at age k is a given number mk. In some models life consists of two or three periods, in others many years of age are considered. Invariably, however, successive cohorts are identical. Consumption and/or earning depends on age but age-specific properties are constant over time. The most important implication of the stationary assumption is the ‘Golden Rule congruence’. Longitudinal relations are always affected by the growth rate and the interest rate, which make longitudinal concepts numerically different from their qualitatively corresponding, cross-sectional counterparts. If and when, however, these two rates are equal (the Golden Rule case) then longitudinal proportions (in some models even quantities) are identical with the cross-sectional ones. The stationary assumption makes room for the representative individual whose presence is required by orthodoxy, because his role is life-time ‘utility maximization’ under selected constraints. Utility is most often derived from consumption (or in some human capital models from work and/or leisure), while income (or consumption) is exogeneously given. Thus in most models optimization yields the ‘longitudinal allocation’ of consumption (or income) over the life-path. The optimal allocation is then considered viable for all individuals and cross-sectional, macroeconomic conclusions can be drawn. Without exception, optimization is subject to the longitudinal (alternatively referred to as individual, competitive, actuarial) budget constraint, to be called here unambiguously the ‘zero-bequest constraint’, which calls for equality of life-time consumption with life-time income. After this point, however, theory is branching off with respect to the cross-sectional environment. For the life-cycle theory of saving and in most human capital models non-zero aggregate saving is either explicitly required or implicitly presumed, as these theories are mainly concerned with wealth (positive or negative). To the contrary, over-lapping generations (OLG for brevity) are built on the dual-constraint principle: besides longitudinal zero bequest, the cross-sectional (or social, conservative, pay-as-you-go, feasibility, etc.) ‘zero-saving constraint’ is also imposed and situations when both constraints are simultaneously satisfied, are called ‘equilibria’. Technically, a certain clumsiness is characteristic of most studies. One reason is that the growth rate and the interest rate are separately denoted and treated, with the result that at least one of them must be constant over time (whether zero or not, does not really matter too much, except that zero is more convenient). The other reason — in OLG models — is the inconvenience inherent in dealing with two concepts (longitudinal bequest and cross-sectional saving), substituting from here to there, watching two constraints simultaneously.