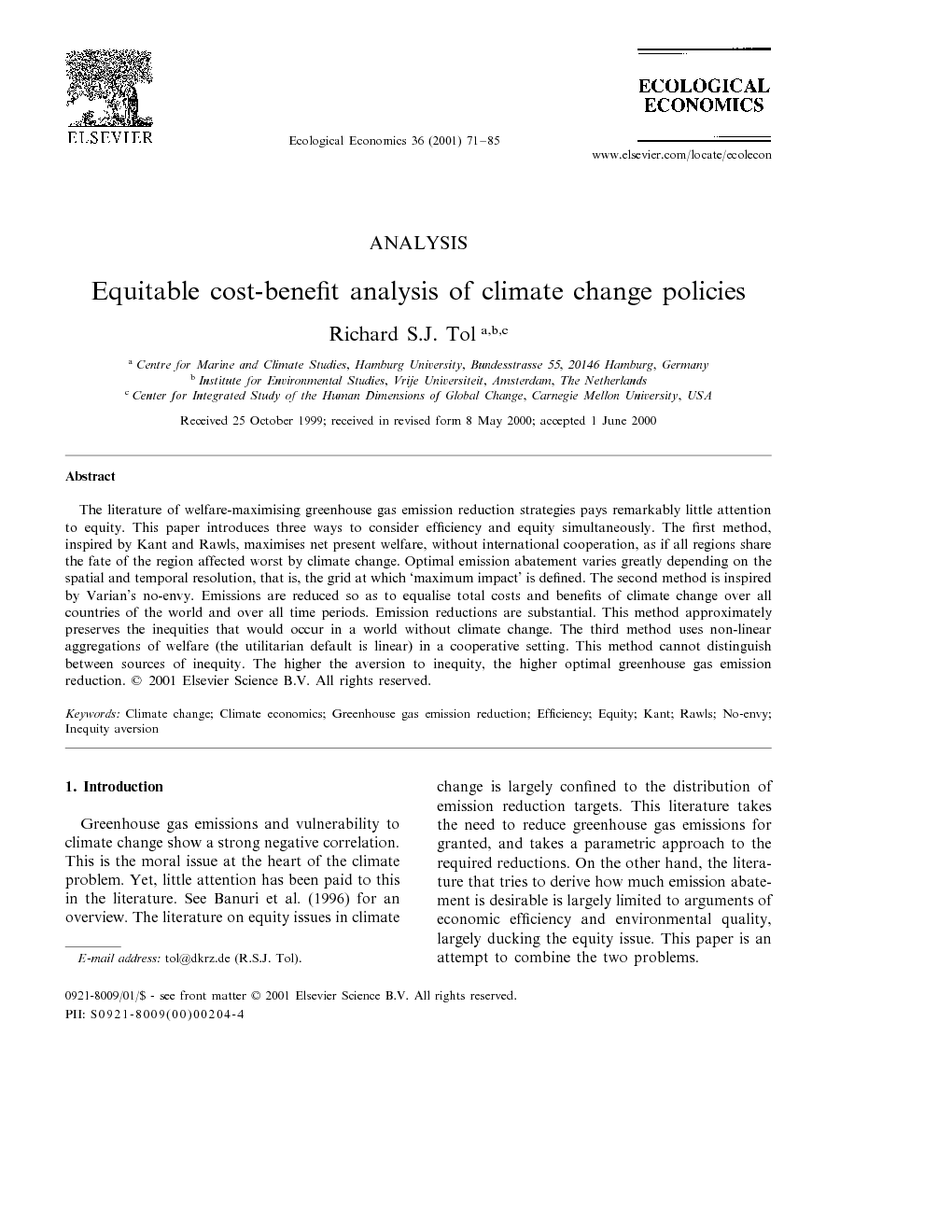 The literature of welfare-maximising greenhouse gas emission reduction strategies pays remarkably little attention to equity. This paper introduces three ways to consider efficiency and equity simultaneously. The first method, inspired by Kant and Rawls, maximises net present welfare, without international cooperation, as if all regions share the fate of the region affected worst by climate change. Optimal emission abatement varies greatly depending on the spatial and temporal resolution, that is, the grid at which ‘maximum impact’ is defined. The second method is inspired by Varian's no-envy. Emissions are reduced so as to equalise total costs and benefits of climate change over all countries of the world and over all time periods. Emission reductions are substantial. This method approximately preserves the inequities that would occur in a world without climate change. The third method uses non-linear aggregations of welfare (the utilitarian default is linear) in a cooperative setting. This method cannot distinguish between sources of inequity. The higher the aversion to inequity, the higher optimal greenhouse gas emission reduction.

Greenhouse gas emissions and vulnerability to climate change show a strong negative correlation. This is the moral issue at the heart of the climate problem. Yet, little attention has been paid to this in the literature. See Banuri et al. (1996) for an overview. The literature on equity issues in climate change is largely confined to the distribution of emission reduction targets. This literature takes the need to reduce greenhouse gas emissions for granted, and takes a parametric approach to the required reductions. On the other hand, the literature that tries to derive how much emission abatement is desirable is largely limited to arguments of economic efficiency and environmental quality, largely ducking the equity issue. This paper is an attempt to combine the two problems. Broadly speaking, there are two approaches to advice on desirable emission abatement. One approach follows the Framework Convention on Climate Change and tries to define a safe, maximum atmospheric concentration of greenhouse gases. The ‘safe emission corridor’ approach, advocated by RIVM (e.g. Alcamo and Kreileman, 1996), bases its target concentrations on half-baked ecological considerations (e.g. Swart et al., 1989, Swart and Hootsmans, 1991 and Azar and Rodhe, 1997). It thus avoids any discussion about equity. The ‘tolerable windows’ approach, championed by PIK (e.g. Toth et al., 1997), bases its target concentrations on geological considerations of the German Advisory Council on Global Change (1995). This takes the naturalist fallacy to the extreme: the future may not fall outside past experiences, because the past was the best of times. Both approaches ignore the fact that trying to avoid inequities of climate change may invoke more serious inequities of emission abatement. Other authors simply take a concentration target as given, and derive a cost-effective path towards that concentration (e.g. Manne and Richels, 1995, Manne and Richels, 1996, Manne and Richels, 1998, Peck and Teisberg, 1996, Wigley et al., 1996, Ha-Duong et al., 1997, Tol, 1999b and Tol, 1999c). Cost-effectiveness has an appeal to justice in that it minimises total costs so that, in principle, everyone can be made better off (although this is typically not done). Rose and Stevens (1993) (see also Rose et al., 1998) propose ten different interpretations of an equitable, international sharing of the burden of meeting a particular concentration target. Tol (1998a) complements cost-effectiveness with intertemporal equity. However, these papers all ignore the equity implications of selecting a concentration target. The other approach to deriving emission and concentration targets includes such trade-offs, at least in principle. However, attempts to derive greenhouse gas emission reductions so as to maximise human welfare are without exception based on a narrow neo-classical interpretation of justice (e.g. Nordhaus, 1991, Nordhaus, 1992, Nordhaus, 1993, Nordhaus, 1994, Peck and Teisberg, 1991, Peck and Teisberg, 1994, Peck and Teisberg, 1995, Maddison, 1995, Manne et al., 1995, Nordhaus and Yang, 1996, Tol, 1997 and Tol, 1999a). ‘Maximum welfare’ is interpreted to mean ‘Pareto optimal’. That is, the status quo (no climate policy) is the base situation and climate policy needs to make everybody better off, at least potentially (cf. Farrow, 1998). This is another form of the naturalist fallacy: The world without policy intervention is a pretty good world. The inequities of a ‘do nothing’ policy have no place in this framework. In fact, the analysis operates under the ‘victim pays principle’: countries that suffer most from climate change are expected to convince large emittors to abate (Tol, 1997). Yet, the cost-benefit approach is closer to including equity than is the safe concentration approach. Therefore, I try in this paper to extend welfare maximisation to considering justice. Roemer (1996) and Sen, 1982 and Sen, 1987 champion this at a theoretic level. I take a more pragmatic approach. Three alternatives are presented, and their results demonstrated with FUND, an integrated assessment model (cf. Weyant et al., 1996, for an overview of such models). The first alternative derives from the basic message of Emanuel Kant (do not to others what you do not want them to do to you) with a Rawlsian flavour (the ‘other’ is the least well-off region). The second alternative is based on the thought that, for all regions for all times, the sum of costs of emission reduction and the costs of climate change should be equal. Thus, the inequities of the no-climate-change scenario are maintained (whereas, in a no-policy-scenario, inequities would deteriorate). Such relative no-envy solutions often prove a pragmatic way out in everyday policy making. In the third alternative, a global welfare function is maximised that explicitly includes a distaste for inequity. This alternative has strong roots in neo-classical economics, but cannot distinguish between inequities of climate change, inequities of emission reduction, and inequities of other causes. Section 2 presents the model. 3, 4 and 5 present the results for the three alternatives in the above order. Section 6 concludes.

This paper explores welfare maximising carbon dioxide emission reductions that better adhere to equity issues than does conventional optimal control. If countries do not cooperate, but do act as if the most vulnerable region's relative damage is their own, emissions are not substantially reduced, much less indeed than in the cooperative optimal control case. If, instead, the relative damage of the most vulnerable period of the most vulnerable region is considered, emissions are reduced about as much as in the cooperative optimal control case. This suggests two things. First, like any extremum operator, the Kant–Rawls framework is very sensitive to its temporal and regional resolution. If the grid is refined, emissions are likely to be reduced further. Second, the analysis demonstrates the power of cooperation over non-cooperation. (A similar conclusion can be drawn with respect to discounting (Tol, 1999a) and uncertainty (Tol, 1999d)). In case the sum of relative carbon dioxide emission reduction costs and relative climate change damage costs is equalised over regions and over time, emission abatement is substantial, keeping CO2 concentrations below 650 ppm. This no-envy solution, however, is very expensive compared to other strategies aiming at the same concentration target. If, in a cooperative setting, a premium is put on an equal distribution of per capita income, emission abatement is stricter than in the case where premium is naught. For a high aversion of inequity, CO2 concentrations may even be kept below 550 ppm. The numbers presented in this paper should be treated with great caution, as they depend on a single parameterisation of a single model. The climate change impact estimates are particularly uncertain, but do drive the numerical results to a substantial extent. The qualitative results are more important. If one takes the climate-change-induced inequities into account, and if one wants to manage them through greenhouse gas emission control, emission abatement should be intensified.9 International cooperation in emission control is crucial. Strong cuts in emissions may well be justifiable on grounds of equity. The qualitative results need some caveats as well. Two of the three methods presented here (Kant, inequity aversion) are sensitive to resolution. It does matter whether one looks at groups of countries, countries, or sector or regions within countries. This opens the door to differences of interpretation. All three methods are dependent on the baseline, and on the metric of expressing costs and benefits, both of which are open to dispute. The main caveat, however, is that it is hard to observe concern for equity issues, other than rhetorical, with the world's governments (Schelling, 1995). The paper presents academic constructs, no descriptions of the real world. These thought experiments may, however, help to inform further thinking about how to handle the enhanced greenhouse effect.