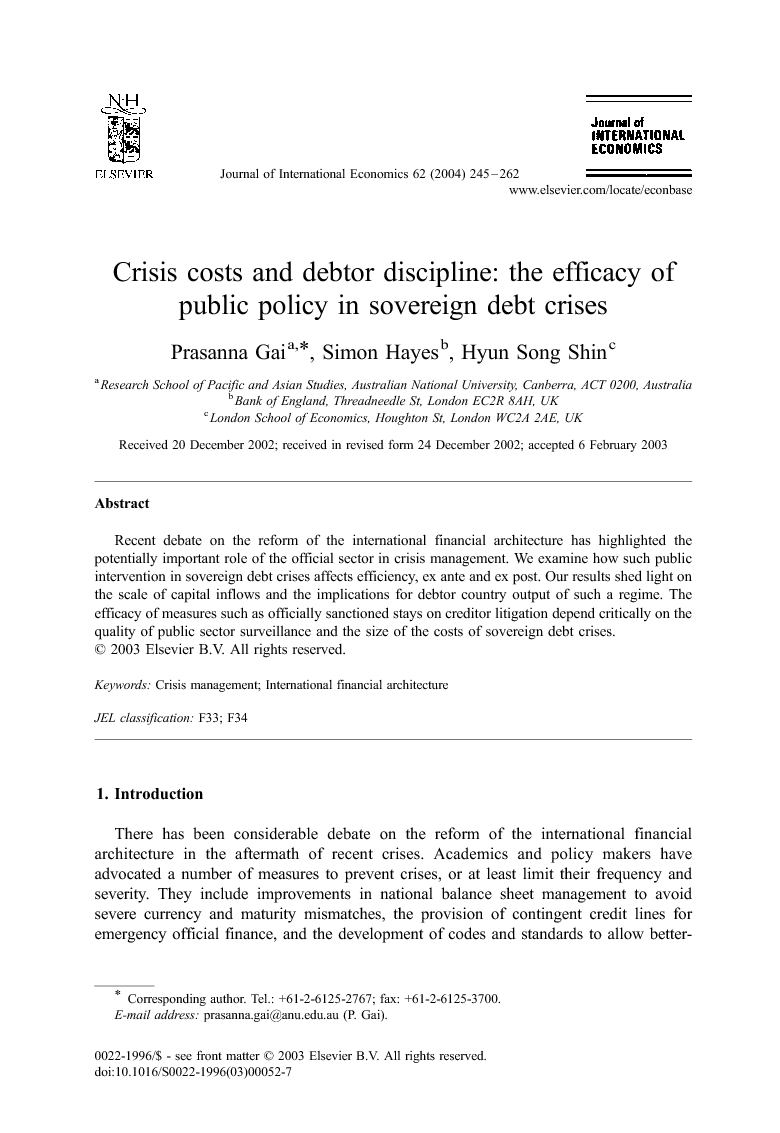 Recent debate on the reform of the international financial architecture has highlighted the potentially important role of the official sector in crisis management. We examine how such public intervention in sovereign debt crises affects efficiency, ex ante and ex post. Our results shed light on the scale of capital inflows and the implications for debtor country output of such a regime. The efficacy of measures such as officially sanctioned stays on creditor litigation depend critically on the quality of public sector surveillance and the size of the costs of sovereign debt crises.

The model outlined above, although simple, sheds some light on the recent policy debate on crisis resolution measures. Some policy makers emphasise the benefits of policy measures such as temporary standstills and stays on creditor litigation, arguing that they can provide a breathing space that curbs disorderly and costly debt workouts. By contrast, private creditors frequently oppose such proposals, arguing that regimes that include such measures discourage much-needed adjustment effort by debtor countries, and reduce capital flows to emerging economies. We argue, however, that official-sector intervention based on systematic guidelines could bring welfare benefits to individual debtor economies. Although the introduction of such measures may reduce the level of capital inflows ex ante, it could compensate for this by ameliorating the disruptive effects of crises ex post. The benefits of regimes with policy intervention are most likely to accrue if the official sector is capable of identifying the source of financial problems and utilising emergency finance effectively. The model is useful for exploring how public sector actions can affect the trade-offs inherent in sovereign debt contracts. The sensitivity of the results to parameter values means that unambiguous welfare conclusions about different regimes cannot be reached. But the analysis raises some important general issues about the nature of official involvement in sovereign debt crises. It shows, for example, how the efficacy of proposals on crisis management depend critically on the quality of public sector monitoring of debtor country conditions. The disciplining effect plays an important part in determining the ex ante terms of the debt contract, i.e. the level of lending and the conditions of the loan. The greater the transparency and accountability of debtor governments, the more effective public monitoring is likely to be. So our results underline the critical role played by IMF surveillance and data disclosure by debtor countries. Although our model shows that there may be clear gains under a regime with crisis management measures, these gains accrue solely to the debtor country. In our setup, creditors are indifferent between outcomes. But as Scharfstein and Stein (1990) note, a banker’s ability to place loans is fundamental to his/her standing in the labour market. A regime that lowers capital inflows to emerging markets may, in fact, be welfare reducing for creditors, perhaps explaining the reticence of creditors to support policy intervention. But there is no reason why lower ex ante lending should be a general result in a richer model than ours. For example, if orderly crisis resolution mean that a crisis country recovers more quickly, investors are likely to be confronted with a greater number of profitable investment opportunities over any given period in time. Creditors are, thus, likely to be unwilling to accept such proposals if the gains are not clearly defined. More generally, this issue raises important questions about measuring global welfare in a regime with policy intervention—one that takes into account both debtor and creditor gains, and weights them accordingly. It should be stressed that the strength of the case for official sector intervention rests heavily on the extent of the output costs of disorderly liquidations. In the event of the bad state occurring, large-scale termination of short-term debt and litigation to recover contracted debt repayments has to have a significant impact on output. Although the most recent crises have indeed been accompanied by significant declines in output, this is by no means a certainty. The implication is that policy makers need to establish the likely scale of the costs posed by creditor coordination problems before attempting to intervene.