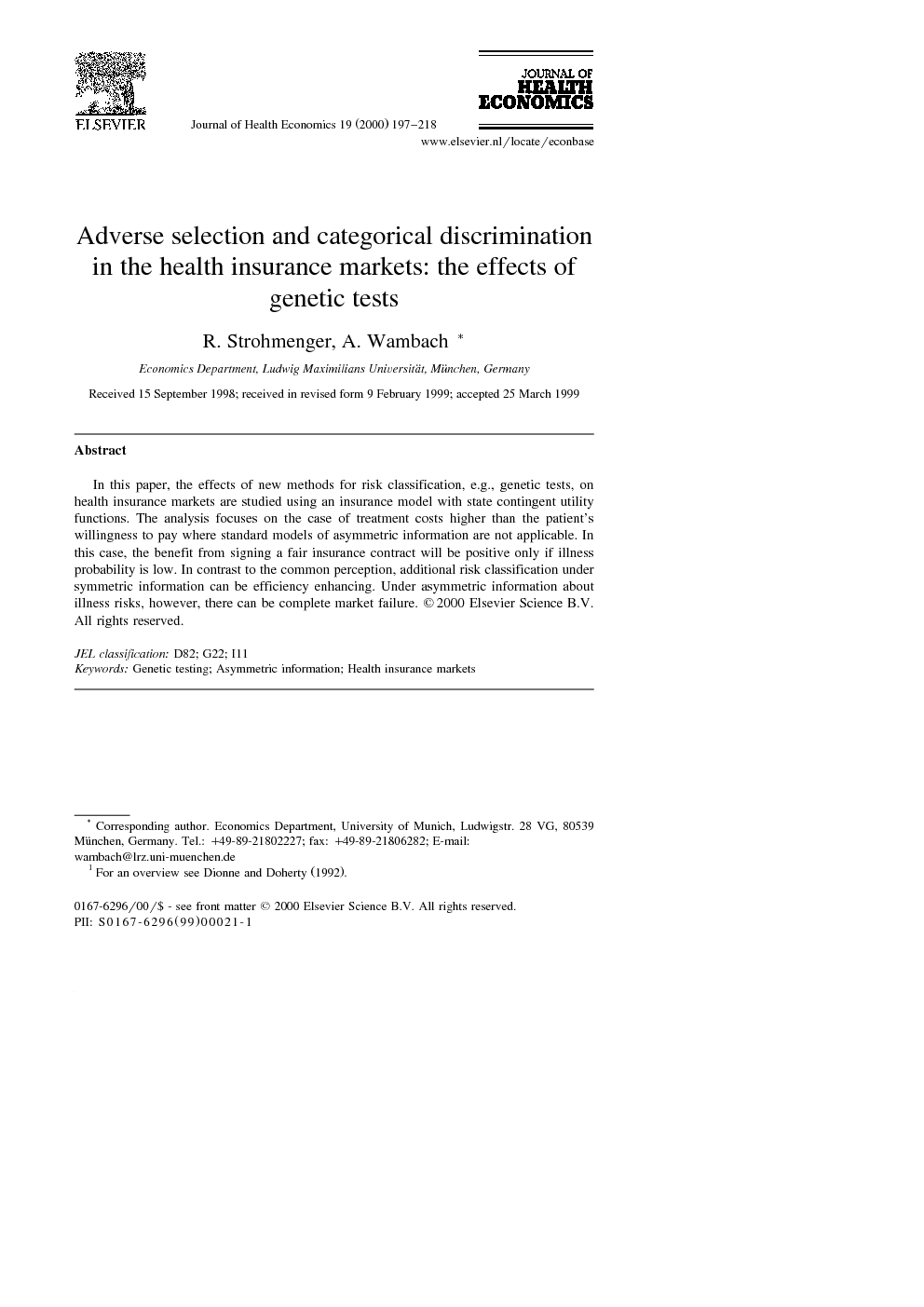 In this paper, the effects of new methods for risk classification, e.g., genetic tests, on health insurance markets are studied using an insurance model with state contingent utility functions. The analysis focuses on the case of treatment costs higher than the patient's willingness to pay where standard models of asymmetric information are not applicable. In this case, the benefit from signing a fair insurance contract will be positive only if illness probability is low. In contrast to the common perception, additional risk classification under symmetric information can be efficiency enhancing. Under asymmetric information about illness risks, however, there can be complete market failure.

The health insurance model presented in this paper is different from standard insurance models that have been widely used to study problems of informational asymmetry and efficiency effects of categorical discrimination. While in liability insurance most of the time there is a definite financial loss, this is not the case in health insurance. In case of illness at first there is a loss of quality of life. This loss can only be transformed into a financial loss by undertaking a treatment. However, most of the time there are many alternatives for treatment, which might differ a lot in respect of their costs and effects. In fact, there is always another diagnostic measure or step of treatment that still has a marginal positive effect but causes such high costs that uninsured individuals would not be willing to pay for it, especially in treatment of chronic diseases. Besides that, treatment of manifested chronic diseases sometimes is also preventive treatment,45 and successful treatment is often part of the diagnosis.46 Therefore, in contrast to liability insurance companies, health insurance companies only refund treatment costs and do not pay out money to sick patients who reject undergoing treatment.47 Building a model for the health insurance market, these characteristics have to be integrated and simplified without being too restrictive. The use of state contingent utility functions seems to be quite an appropriate way of substantiating the transformation of the loss of well-being into a financial loss. The only restriction caused by this assumption might be the exclusion of acute life-threatening diseases from the analysis. However, if treatment only reduces mortality marginally, the model can also be applied to acute diseases. The quality of the results obtained would not be different, if the assumptions were dropped that treatment provides perfect restoration of health. In fact, it is the assumption that treatment costs are higher than willingness-to-pay which drives the main results. Still, rational individuals with low risks will demand insurance that refunds costs of those kinds of therapies where T>R(W0), although they would not be willing to pay for the treatment in case they were ill. This might be quite an important aspect in health insurance that so far has not received much attention in the analysis of insurance markets under asymmetric information. As has been shown in this paper, results from standard insurance market models may not simply be transferred to health insurance markets. On the basis of the present model, policy conclusions for the regulation of health insurance markets have to be thought over. 4.2. Efficiency effects of new methods for risk classification In Section 2.3, it has been argued that under certain conditions costless categorical discrimination can enhance efficiency on private health insurance markets. In contrast to standard models, making the results of genetic tests available to the insurer might be welfare improving. The efficiency gain is maximized if carrier have a very large illness risk, while non carriers still face some non-negligible risk. This is a characteristic that some genetic tests seem to have in deed, since many common diseases (e.g., osteoarthritis48) have a hereditary, genetically detectable variant as well as a genetically not detectable variant. Efficiency gains from risk classification concerning these diseases have to be regarded as relatively high. National health insurance fails to reach efficiency in cases where costless categorical discrimination is able to enhance welfare. Under national insurance, the insurance contract for high risk types covers treatment methods that informed high risk types would not want to be included in their optimal health risk insurance bundle, so that high risk types have to be regarded as overinsured. In contrast, low risk types to this extent remain underinsured. As follows from the analysis in Section 3, results from predictive tests can have disastrous efficiency effects on private insurance markets if there is asymmetric distribution of information. Depending on the legal framework, insurance market equilibria can be of the Rothschild–Stiglitz-, Wilson E2- or Wilson–Miyazaki–Spence-type, in all of which the ex ante expected utility is lower than under the condition of no information about risk types.49 In case of treatment costs higher than willingness-to-pay, the insurance market can even collapse. Now, if we try to draw conclusions from the health insurance model, we have to be aware that in the real situation there are many different kinds of diseases and treatment possibilities so that there is a multidimensional problem. Indeed, we can regard real health insurance as a bundle of numerous unique health insurance contracts each covering costs of one specific way of treatment applicable in one specific diagnosis. If we assume that individuals are able to freely and independently combine essential contracts in order to form their optimal health insurance bundle, then the feasible bundle will become smaller if the market collapses for one of those essential contracts. In the case of asymmetric information this leads to an efficiency loss because of underinsurance of low risk individuals, since they cannot include all the desired essential contracts into their insurance bundle. As has been shown in Section 3.1, this underinsurance of low risk individuals is even more distinctive if the legislation framework admits only pooling (and no separating) contracts. In those cases, forcing insurance companies to sell pooling contracts in health insurance has to be considered as an inadequate way to reach efficiency.