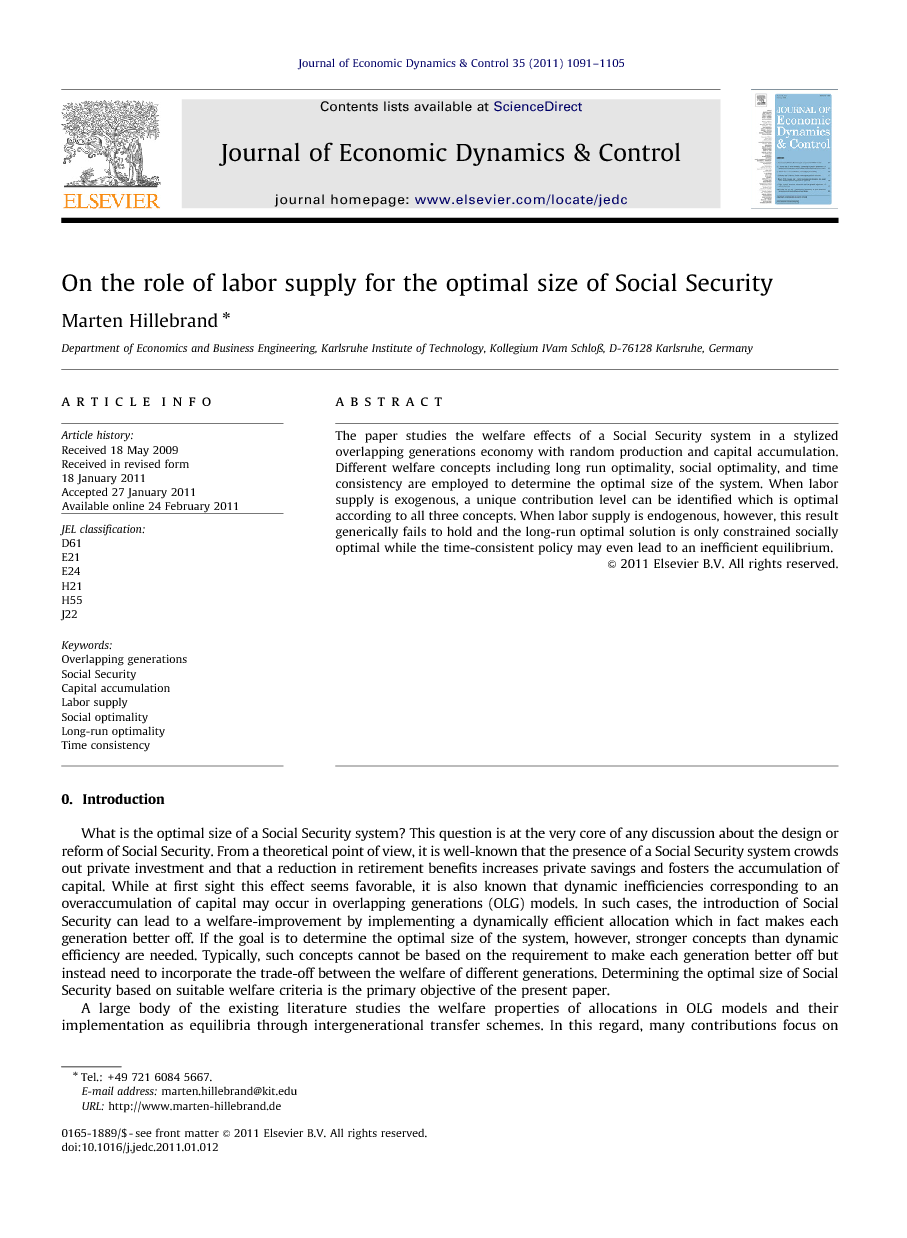 The paper studies the welfare effects of a Social Security system in a stylized overlapping generations economy with random production and capital accumulation. Different welfare concepts including long run optimality, social optimality, and time consistency are employed to determine the optimal size of the system. When labor supply is exogenous, a unique contribution level can be identified which is optimal according to all three concepts. When labor supply is endogenous, however, this result generically fails to hold and the long-run optimal solution is only constrained socially optimal while the time-consistent policy may even lead to an inefficient equilibrium.

What is the optimal size of a Social Security system? This question is at the very core of any discussion about the design or reform of Social Security. From a theoretical point of view, it is well-known that the presence of a Social Security system crowds out private investment and that a reduction in retirement benefits increases private savings and fosters the accumulation of capital. While at first sight this effect seems favorable, it is also known that dynamic inefficiencies corresponding to an overaccumulation of capital may occur in overlapping generations (OLG) models. In such cases, the introduction of Social Security can lead to a welfare-improvement by implementing a dynamically efficient allocation which in fact makes each generation better off. If the goal is to determine the optimal size of the system, however, stronger concepts than dynamic efficiency are needed. Typically, such concepts cannot be based on the requirement to make each generation better off but instead need to incorporate the trade-off between the welfare of different generations. Determining the optimal size of Social Security based on suitable welfare criteria is the primary objective of the present paper. A large body of the existing literature studies the welfare properties of allocations in OLG models and their implementation as equilibria through intergenerational transfer schemes. In this regard, many contributions focus on OLG models with aggregate risk such as random shocks to the production process. Models that fall into this category are, among many others, Chattopadhyay and Gottardi (1999), (Demange and Laroque, 1999 and Demange, 2002) or Peled (1984) and Sakai (1988). The employed welfare criteria are usually ex ante optimality and interim or conditional Pareto optimality which extend the classical Pareto criterion to stochastic OLG economies. A detailed account of these concepts and their relation may be found in Demange (2002). While these criteria can identify Pareto-inefficient allocations and failures of the first welfare theorem, they are in general not suitable to determine a unique optimal allocation. Hence, their application seems inappropriate for the purpose of determining the optimal size of a Social Security system. In addition, a large class of models focuses on pure exchange economies taking production or consumer incomes as an exogenously determined stochastic process which is independent of the Social Security system. This assumption abstracts from the adverse affect of Social Security on capital accumulation as exhibited above. An alternative approach which incorporates the production process and capital accumulation into a stochastic OLG model was developed in Wang (1993) and further generalized in Wang (1994). His framework was extended by Hauenschild (2002) to include a simple Social Security system with a constant contribution rate levied as a proportional tax on labor income. As a central result, he shows that the adverse effect of Social Security on capital accumulation first established by Feldstein (1974) for deterministic models extends to a general class of stochastic OLG economies. He leaves open, however, whether this effect is also desirable from a welfare perspective which, as exhibited above, may fail to be the case in the presence of dynamic inefficiencies. Common to the aforementioned approaches is that labor supply is taken as exogenous and assumed not to respond to changes in the Social Security policy. Several contributions in the literature, however, stress the sensitivity of labor supply to changes in the prevailing tax-transfer scheme, see, e.g., Birkeland and Prescott (2007), Prescott (2005), or Rogerson and Wallenius (2009). Despite these insights, most of the existing studies on Social Security neglect this interdependence by taking labor supply as exogenous. Exceptions may be found, e.g., in Breyer and Straub (1993) and Homburg (1990). Using a deterministic overlapping generations model they investigate the welfare effects of Social Security based on the Pareto criterion for a closed and open economy, respectively. Against this background, the goal of the present paper is to contribute to the discussion by analyzing the welfare effects of Social Security in a stylized OLG model with a particular focus on the role of labor supply. The approach extends the existing studies by incorporating the role of risk through random production shocks as well as the interactions between Social Security, capital accumulation, and labor supply. Conceptually, the employed setup is similar to Wang (1993) and Hauenschild (2002) which is extended to the case with endogenous labor supply. To ensure analytical tractability, however, the assumptions on preferences and technologies are much less general than in Wang (1994) and Hauenschild (2002). Instead, the paper focuses on a parametrization that is well-known to admit analytical solutions. Using the framework developed, different normative criteria are applied and compared and the optimal size of a Social Security system corresponding to an optimal contribution rate is determined under each criterion. While an extension towards more general settings marks a challenging task for future research, the model developed in this paper suffices to illustrate the crucial role of labor supply for the welfare effects of Social Security and its optimal size. The paper is organized as follows. Section 1 introduces the underlying model and establishes the existence and form of an equilibrium. 2, 3 and 4 analyze the welfare effects of Social Security using the concepts of long run, social, and constrained social optimality. Finally, Section 5 introduces time consistency as another welfare criterion and summarizes the previous results. Section 6 draws some conclusions, proofs for all results are placed in the mathematical appendix.

What is the optimal size of a Social Security system? The present paper made an attempt to answer this question within a simple overlapping generations economy with random production shocks, capital accumulation, and endogenous labor supply. Social Security was modeled as a redistributive pay-as-you-go scheme the size of which was identified with its constant (possibly negative) contribution rate. Different welfare concepts were applied to determine the optimal size of the system corresponding to an optimal contribution level. The results confirm the decisive role of labor supply for the welfare effects of Social Security and the answer to the above question. When labor supply does not respond to changes in Social Security, the optimal size of the system is uniquely determined according to the employed welfare criteria and coincides with the golden rule solution. If labor supply is endogenous, however, this results fails to hold and the long-run optimal solution is only constrained socially optimal while the requirement of time consistency may even lead to an inefficient equilibrium outcome. Apart from the quantitative findings, the basic insight derived from the previous analysis is therefore that any welfare analysis of Social Security should pay adequate with respect to the role of labor supply and its dependence on the parameters of the Social Security system. The previous findings motivate several extensions of the analysis conducted in this paper. A first modification concerns the design of the Social Security system which was characterized by constant, state-independent contribution rates in this paper. This restriction ensures analytical tractability but abstracts from any form of intergenerational risk sharing through the Social Security system. While the results offer some support for this design under exogenous labor supply, it was shown that, in general, such a redistribution scheme fails to implement a first best socially optimal allocation if labor supply is endogenous. This motivates an extension of the previous study towards more general redistribution schemes involving state-dependent contribution rates as studied, e.g., in Demange and Laroque (2000). A second extension concerns the underlying class of preferences and technologies. To obtain analytical results, the present paper confined attention to a special – yet popular – parametrization under which closed form solutions could be derived. As a first step towards more general preferences, one could maintain the additive structure of (7) and generalize the logarithmic functional forms. This would permit to consider, e.g., different intratemporal elasticities of substitution between consumption and labor as well as different degrees of risk aversion with respect to second-period consumption. Generalizations of this type for OLG models with exogenous labor supply may be found, e.g., in Wang (1993), Hauenschild (2002), and also Demange and Laroque (2000). Their results suggest that the recursive equilibrium structure and the welfare concepts employed in this paper should be amendable to such extensions. On the other hand, the structural properties of state-independent labor supply and a linear savings function (with respect to income) exploited in the previous analysis would get lost under more general preferences. As a consequence, the computation of equilibria can be expected to become much more involved and it seems impossible to derive closed form solutions. Therefore, an extension of the previous welfare study would probably have to be based on numerical simulations in order to obtain quantitative results. However, the basic findings, notably of Theorem 2, Theorem 5 and Theorem 7, should continue to hold such that the quantitative findings derived in this paper would provide a reference scenario in this generalized setup.