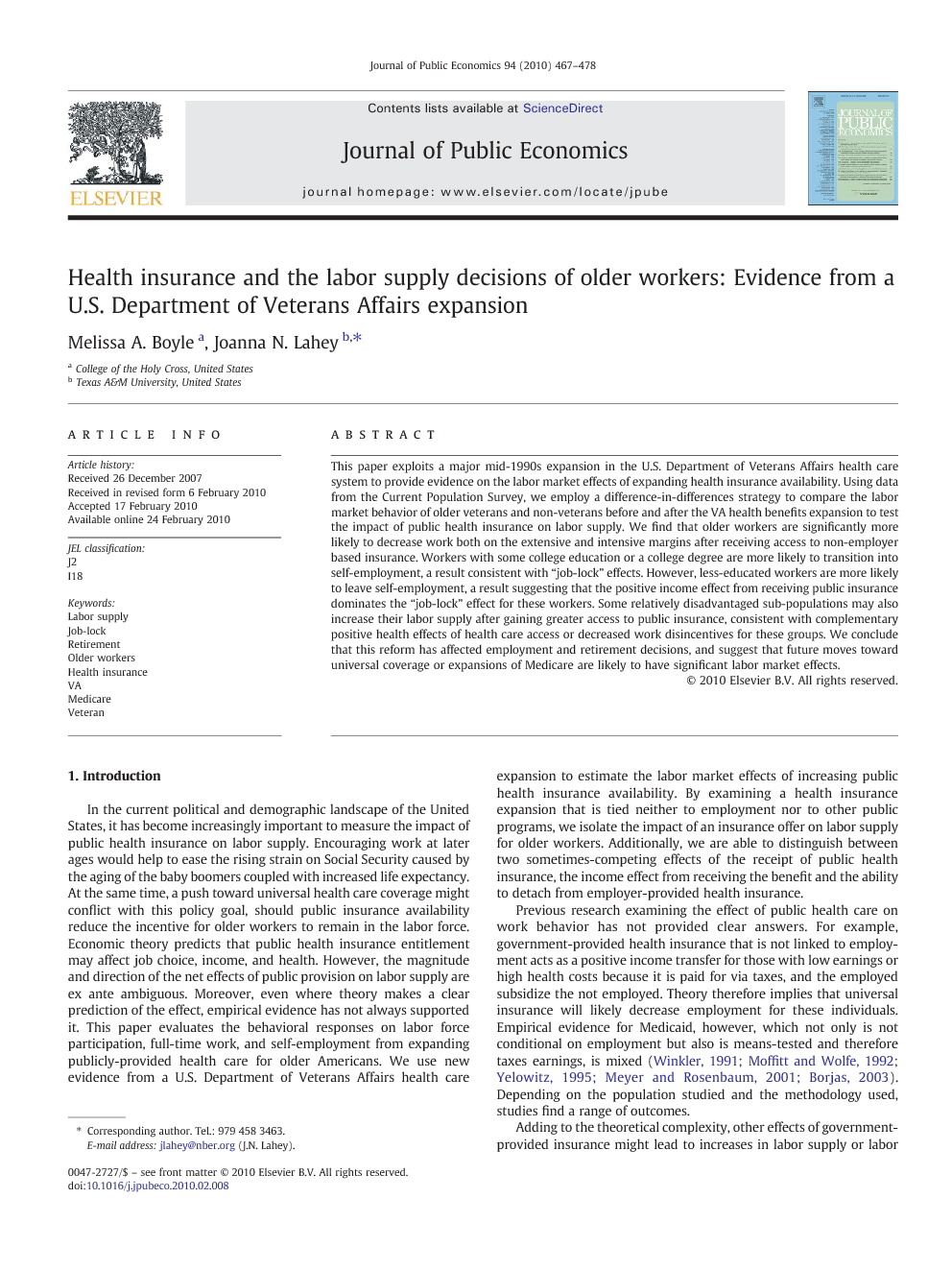 This paper exploits a major mid-1990s expansion in the U.S. Department of Veterans Affairs health care system to provide evidence on the labor market effects of expanding health insurance availability. Using data from the Current Population Survey, we employ a difference-in-differences strategy to compare the labor market behavior of older veterans and non-veterans before and after the VA health benefits expansion to test the impact of public health insurance on labor supply. We find that older workers are significantly more likely to decrease work both on the extensive and intensive margins after receiving access to non-employer based insurance. Workers with some college education or a college degree are more likely to transition into self-employment, a result consistent with “job-lock” effects. However, less-educated workers are more likely to leave self-employment, a result suggesting that the positive income effect from receiving public insurance dominates the “job-lock” effect for these workers. Some relatively disadvantaged sub-populations may also increase their labor supply after gaining greater access to public insurance, consistent with complementary positive health effects of health care access or decreased work disincentives for these groups. We conclude that this reform has affected employment and retirement decisions, and suggest that future moves toward universal coverage or expansions of Medicare are likely to have significant labor market effects.

In conclusion, we find that providing free comprehensive health insurance outside of employment decreases full-time work for older workers and increases both part-time work and non-work. Our finding of a decrease in self-employment for those with low levels of education implies that the income effect of public insurance receipt dominates the reduction in job-lock for these individuals. However, for those with higher levels of education for whom employment may be more attractive, self-employment increases, suggesting that the reduction in job-lock dominates the income effect for these groups. Thus, our results suggest that the job-lock effect dominates for more highly educated workers, who are arguably more productive. The income effect dominates for less-educated workers, who are more likely to be unhealthy or credit-constrained. While a reduction in job-lock unambiguously increases labor market efficiency, the welfare implications of a decrease in labor supply because of the income effect are unclear. On the one hand, this may represent labor force exit by unhealthy individuals who are better off not working and may be replaced by more efficient new entrants to the labor force. On the other hand, if productive workers are being encouraged to exit the work force earlier than they otherwise would, the resulting impact on overall productivity may be negative. To the extent that younger workers subsidize national health insurance for older workers, the income effect on older people from universal coverage may be a reason that non-employment is higher for older people in countries with national health coverage. However, lower employment in these groups may be efficient to the extent that it allows for more productive sorting into work and retirement.