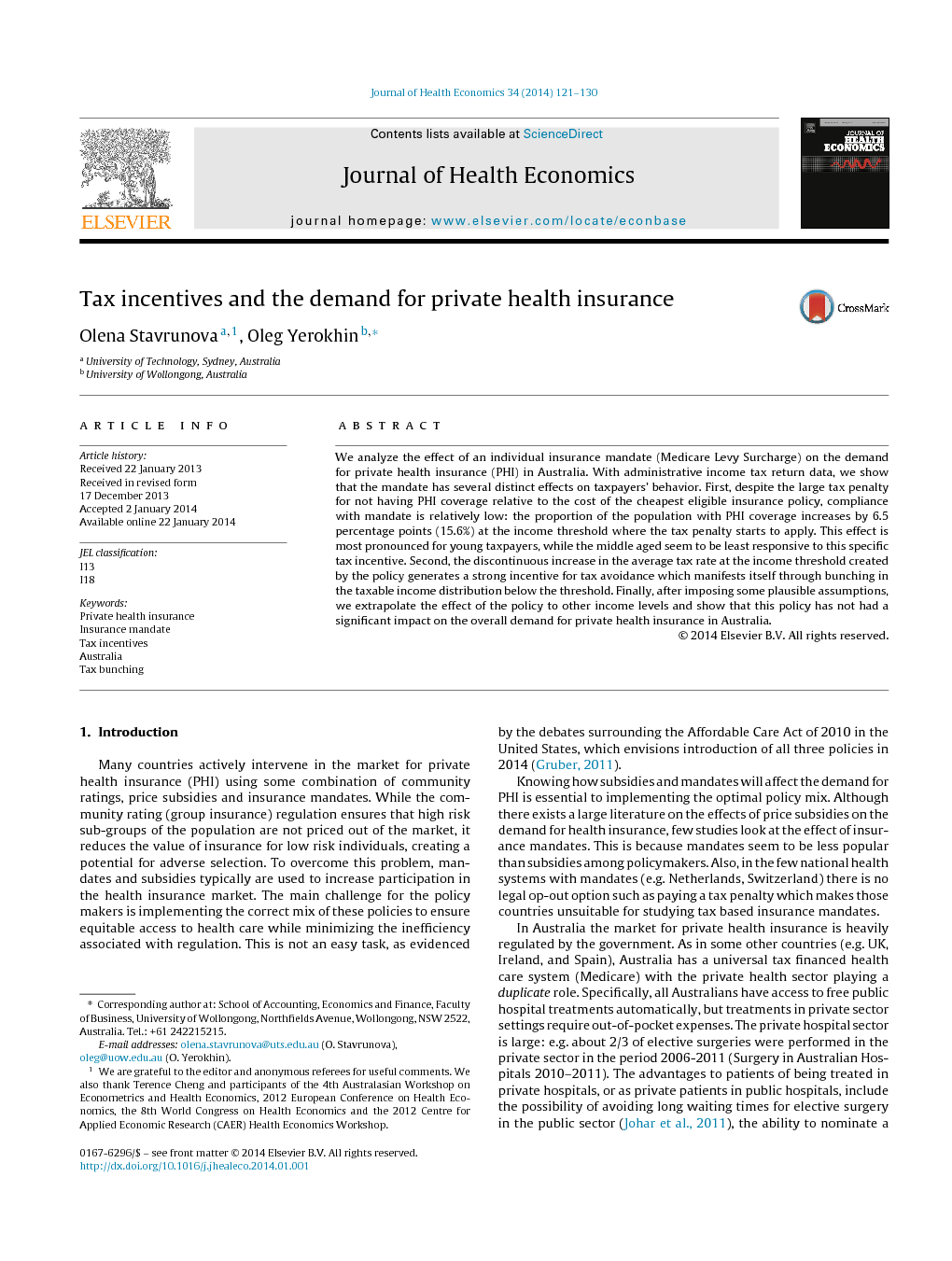 We analyze the effect of an individual insurance mandate (Medicare Levy Surcharge) on the demand for private health insurance (PHI) in Australia. With administrative income tax return data, we show that the mandate has several distinct effects on taxpayers’ behavior. First, despite the large tax penalty for not having PHI coverage relative to the cost of the cheapest eligible insurance policy, compliance with mandate is relatively low: the proportion of the population with PHI coverage increases by 6.5 percentage points (15.6%) at the income threshold where the tax penalty starts to apply. This effect is most pronounced for young taxpayers, while the middle aged seem to be least responsive to this specific tax incentive. Second, the discontinuous increase in the average tax rate at the income threshold created by the policy generates a strong incentive for tax avoidance which manifests itself through bunching in the taxable income distribution below the threshold. Finally, after imposing some plausible assumptions, we extrapolate the effect of the policy to other income levels and show that this policy has not had a significant impact on the overall demand for private health insurance in Australia.

In this paper, we study the effect of an individual insurance mandate, the Medicare Levy Surcharge (MLS), on the demand for PHI within the Australian national health care system. Using administrative income tax returns data for the entire population of Australian taxpayers in 2007–2008 allows us to estimate the effect of the policy at the MLS income threshold for single individuals. We find that the policy has resulted in an increase in the PHI coverage rate of 6.5 percentage points or 15.6% at the threshold. Overall, this policy has increased the total number of insured singles by 7.2% and increased the PHI rate of singles by 2.4 percentage points. Our results suggest that the MLS has had at best a modest effect on the demand for private health insurance in Australia during the study period. The effect of the policy seems to be the strongest among older taxpayers. Also, a significant number of individuals choose not to comply with the mandate and pay the MLS tax instead. This is especially true for younger people: 44% of taxpayers below the age of 30 with incomes above the MLS threshold choose not to comply with the mandate. To interpret these results, we must consider the supplementary role that PHI coverage plays in the Australian mixed public/private health care system. That is, with a tax financed Medicare system guaranteeing free treatment in the public sector, the attractiveness of private insurance is greatly reduced. As a result a large proportion of younger individuals may have low willingness to pay for PHI coverage. At the same time, this supplementary role of the PHI cannot be the only explanation for the limited effectiveness of the mandate. Clearly, many of the uninsured high income taxpayers would be able to purchase PHI cover at the cost lower than their MLS tax liability. Thus, these individuals either face significant transaction costs of purchasing insurance or they make dominated choices. Because these frictions appear to significantly influence the effectiveness of the policy, understanding them remains an important topic for future research.